Farmer protests flare up again, many injured in Haryana crackdown

The farmers were protesting against a BJP meeting on the forthcoming panchayat polls — it was being chaired by Chief Minister Manohar Lal Khattar. 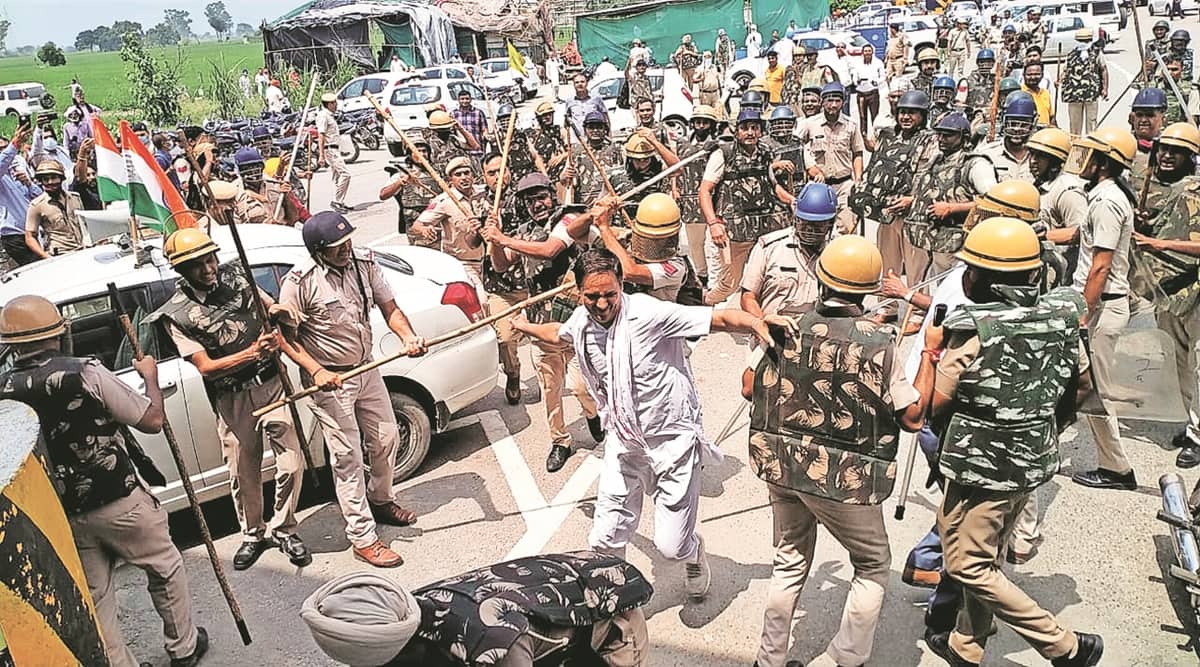 The agitation against farm laws enacted last year returned to the spotlight Saturday when Haryana Police cracked down on farmers in Karnal, leaving several injured in a lathicharge at the Bastara toll plaza on the national highway.

The farmers were protesting against a BJP meeting on the forthcoming panchayat polls — it was being chaired by Chief Minister Manohar Lal Khattar.

Police detained several people after using force in the afternoon to disperse a crowd that had blocked the highway in Karnal.

Condemning the police action, leaders of farm unions urged farmers across Haryana to protest on the roads.

By evening, several stretches on the highway and toll plazas across the state were blocked by farmers, resulting in traffic snarls.

Traffic was being diverted to alternative routes as farmers threatened to create more blockades on highways and toll plazas, not only in Haryana but in the neighbouring states as well.

As part of their ongoing protest against farm laws enacted last year, farmers have occupied almost all toll plazas on national and state highways across Haryana. They have been allowing traffic without payment of toll.

But after the incident Saturday at Bastara, toll plazas in Karnal, Kurukshetra, Panchkula, Fatehabad, Yamunanagar, Jind, Hisar, Rohtak and others were blocked.

Members of Parliament, MLAs and district presidents were present at the meeting.

The farmers attempted to gather outside the Prem Plaza hotel in Karnal where the meeting was going on, but when they could not reach there, they blocked the national highway at the Bastara toll plaza.

They showed black flags to vehicles carrying BJP leaders and even tried to block their way. But due to heavy police presence, they could not stop the vehicles and kept raising slogans.

When they refused to lift the highway blockade, police used force, charging at farmers with lathis and leaving several injured – they were taken to local hospitals by fellow protesters.

The national highway blockade was eventually cleared, but tension began mounting as more and more farmers reached the spot, reoccupying the toll plaza.

Advertisement
Protesters block a highway in Ambala in protest over police action against farmers in Karnal. (Express Photo)

Chief Minister Khattar told reporters: “Today, there was a BJP state-level meeting. I condemn the protest call given by them (farmers). Obstructing any organisation’s programme for any reason is an anti-democratic step. Second, if they (farmers) had to hold a protest, they should have done it peacefully. Earlier, we had reached an understanding that they would hold peaceful protests. While protesting, if they pelt stones at police and jam highways, then police will also have to do some work. If there is any atrocity on part of the police, they will also be punished. But if there is lawlessness on the part of farmers, legal action will be taken against them too.

ADGP Navdeep Virk said: “Around noon, protesting farmers forcefully blocked the highway and attempted to enter Karnal city. When police personnel deployed there told them that they could not go towards Karnal city, the protesters got violent and a few of them pelted stones at police personnel. Some even attempted to attack police with shovels etc. Police used mild force and dispersed them. The information received so far reveals that four farmers and 10 police personnel sustained injuries.”

“On June 7, we had talks with SKM leaders who had given us a written assurance that they would not indulge in any violent protest in future and would only hold peaceful protests. But there have been several instances after that in which farmers have resorted to violence. Whenever a protest gets violent, it becomes the duty of police to maintain law and order,” Virk said.

BJP state president Dhankar, however, said: “The circumstances in which police used force on protesters must be thoroughly probed. I have requested the Chief Minister to look into it. Although lathicharge should not have happened, farmers should have also protested within the limits so that a political party’s programme is not affected.”

Leader of Opposition and former Chief Minister Bhupinder Singh Hooda and leaders of different parties condemned the use of police force on farmers.

In a statement, Hooda said: “This is barbaric. Farmers were peacefully protesting at least 15 km away from the place where the BJP’s programme was being held. Such action on farmers clearly shows the ill-intentions of this state government. There should be an impartial investigation into this entire episode and the guilty should be punished. It has become a habit of this government. First, they deliberately create such circumstances of confrontation, engage the farmers in that confrontation by provoking them, and then assault them mercilessly.”

Explained: What to watch out for at the renovated Jallianwala Bagh memorial