The Khulafa-e-Rashideen masjid at Uttawar village in Palwal was searched by NIA officers on October 3, days after the agency arrested three men, including the Imam of the masjid, Mohammed Salman, in New Delhi in an alleged terror-funding case. 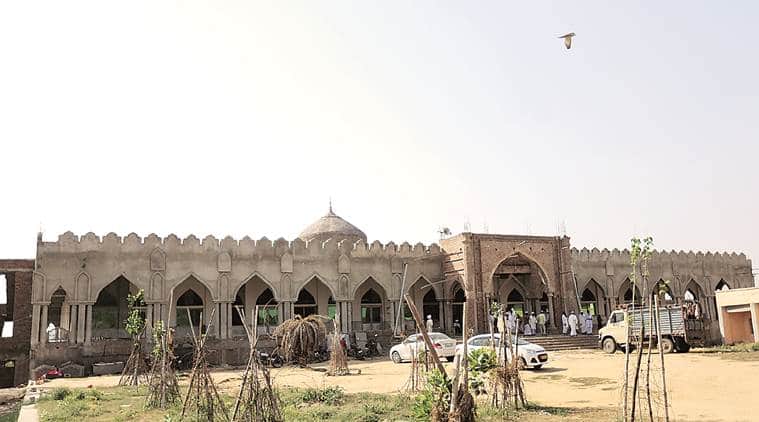 Khulafa-e-Rashideen mosque, which was searched by NIA on Oct 4, is caught in a land dispute, say locals. (Photo: Gajendra Yadav)

A mosque in Palwal district of Haryana has come under the scrutiny of security agencies after a National Investigation Agency (NIA) probe found that it was allegedly built with funds from the Hafiz Saeed-led Lashkar-e-Taiba (LeT) in Pakistan.

The Khulafa-e-Rashideen masjid at Uttawar village in Palwal was searched by NIA officers on October 3, days after the agency arrested three men, including the Imam of the masjid, Mohammed Salman, in New Delhi in an alleged terror-funding case.

While residents of Uttawar said the mosque is embroiled in a land dispute and were unaware of Salman’s links to the LeT, the NIA is questioning office bearers of the mosque and scrutinising the account books, details of donations and documents seized.

NIA investigations, sources said, have found that Salman allegedly funnelled FIF money to build the mosque in Palwal. “Salman, who came in touch with LeT associated men when he was in Dubai, had been receiving funds from FIF. The organisation, we have learnt, gave him Rs 70 lakh to build a mosque in Uttawar. It even gave him money for the marriage of his daughters. We are now probing from where the mosque has been receiving its donations and how this money is being used,” an NIA officer said.

The officer said that Salman, who hails from Uttawar but has been living in Delhi since childhood, was among the largest contributors to a fund that was raised to build the mosque. Sources said that residents of the village arranged for over 10 acres of land on its own while money for construction was given by Salman.

The NIA alleged that this money actually came from the FIF. “The village does not appear to be aware of the source of funds. They believe it has come from Salman,” said another officer. After Salman’s arrest in September, the NIA, in an official statement said: “During investigation, it emerged that one Mohammad Salman…is in regular touch with one Dubai-based Pakistani national, who in turn is connected with the Deputy Chief of Falah-e-Insaniyat Foundation. The accused person has been receiving funds, being sent by FIF operators and his associates through hawala operators.”

According to the NIA, the FIF is a front-end organisation of “the LeT, a terror organisation proscribed under UAPA… FIF is placed on the list of terrorist organisations as per entry 33 in the First Schedule to the UAPA read with Prevention and Suppression of Terrorism (Implementation of Security Council Resolutions) Order 2016”.

In the village of Uttawar, however, few buy the NIA story. Most believe it is a result of a court battle between the villagers and some families squatting on the mosque land. “Because we are trying to evict them, it appears someone has given this wrong information to the police. No one in the village can believe such a thing. Salman comes from a very reputed family in the village. No one from his family has ever had a criminal case against them,” said Khalid Hussain. Hussain was present at the mosque when it was searched and is the son of former Uttawar Sarpanch, Akhtar Hussain.

Salman’s cousin Yaqub (77) also vouches for his innocence. “In Islam, betraying the nation is a sin. Hafiz Saeed is a foreigner. A God-fearing man like Salman would never align with him,” he said.

The current Imam of the mosque, Mohammed Jamshed, shows a ledger book which has entries of daily expenses. “All you will find here is an account of onions, garlic and tomatoes. Our records are absolutely clean. We do not investigate the source of contributions. This mosque has been built with contributions from a lot of people. We do not know where Salman got his money from. But I am not ready to believe he would put dirty money here. If at all it is dirty money, I doubt if he knew that himself,” said Jamshed.

According to Uttawar residents, Salman’s late father, Maulvi Dawood, is well-regarded among Muslims in the Mewat region. He migrated to Delhi more than 50 years ago and was an Imam of a significant mosque in Nizamuddin till his death. For Uttawar, he was an authority on Islam and had the final say in all disputes in the village.

He had imparted the same knowledge to his oldest son Salman. “That is why when in 2009 the village earmarked 10 acres for the mosque and the work began the next year, Salman was not only made the in-charge of mosque construction and fund collection, but also its Imam. There was no one else in the village better suited for this because of his pedigree,” said Mohammed Saad, who runs the mosque Madarsa.

For the past eight years, according to villagers, Salman visited Uttawar regularly where he stayed in a small, spartan room near the mosque to oversee its construction. The mosque is still under construction and villagers are waiting for more money to complete it.

According to NIA, Salman was involved in taxi and dairy product businesses but had incurred losses. Later, he went to Saudi Arabia for Umrah. “He also visited Dubai a few years back where he met few Pakistani nationals and thereafter started getting funds through hawala,” said an NIA officer.

The NIA Friday also raided a Kashmiri shawl shop in Lajpat Nagar and a house in connection with its probe into the case. It has recovered several “ incriminating documents” and Rs 18 lakh in cash apart from six mobile phones during the raids.

The premises belong to Hilal Ahmed Rather, who hails from Kashmir. It is suspected that Hilal was running the shop as a front to launder FIF money, said NIA sources. Hilal’s name cropped up when Salman and Sajjad Wani, were questioned.