Hapur attack victim’s brother: FIR not lodged as per our choice…we are scared

Since the incident, Hapur police have arrested two residents of Baghera Khurd village on charges of murder, attempt to murder and rioting. The arrest followed an FIR registered on the basis of Samiuddin’s brother Yasin’s complaint. 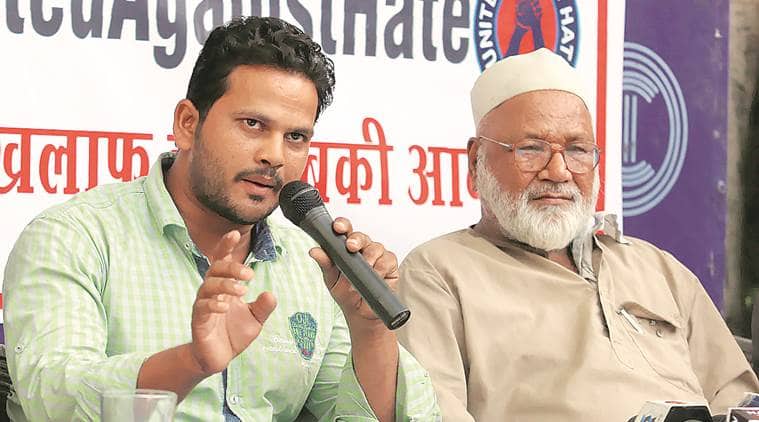 A phone call offering prospects of some earning for cattle trader Qasim, 45, and a routine trip by Samiuddin, 65, to collect animal fodder from his field led them to the stretch between two villages in Hapur district, in Uttar Pradesh, on the afternoon of June 18, their families said on Friday.

The trip led to attack on the two Hapur residents by a mob that left the former dead and the latter critical.

As Samiuddin recuperates at a hospital, his elder brother Mehruddin on Friday maintained that they ran from hospital to hospital on the fateful day for hours, and that when a family member tried to write his complaint, the police told him that something or the other was not correct.

He said, “The FIR has not been registered as per our choice but we are very scared. We cannot say anything on this. It is better that we do not say anything because we don’t know what can happen to us…”

On Monday, Mehruddin said, “We met the police but we do not know the legal process. When my brother (Yasin) tried to write his complaint, he was told that this was not correct, or that was not correct. We did not (then) know about Samiuddin’s whereabouts. In that position, we just said that we want justice, that we want the culprits to be punished, that we should be secure, and that he should get medical treatment. They told us that all this will happen, sign on this. My brother signed on it.”

Deceased Qasim’s brother Mohammad Nadeem said that Qasim was called to get some fodder for cattle around Monday noon. “He traded in cattle and similar livestock. I don’t know whether they had a fight (before) but he was beaten because they thought he was a kasai (butcher)…as a Muslim. One person there asked people to give him water but another said, ‘don’t give him water, he is a kasai…let him die’.”

Since the incident, Hapur police have arrested two residents of Baghera Khurd village on charges of murder, attempt to murder and rioting. The arrest followed an FIR registered on the basis of Samiuddin’s brother Yasin’s complaint.

Qasim’s brother Mohammad Salim has been made a witness in the case, his family members said. On Thursday evening, Hapur SP Sankalp Sharma had told The Indian Express that Salim had give his statement. “He met me and he told me what is mentioned in the FIR,” Sharma said.

Salim told The Indian Express, “It was not related to cow. Some people on a motorcycle hit my brother and Samiuddin. When they objected, they called other residents of Baghera, and they all attacked them…. They were jealous of my brother because he was a trader, and because he was Muslim.”

Neither Salim nor Yasin attended the press meet in Delhi on Friday. Minutes before Nadeem reached the venue, an announcement was made by members of the organisation that the cattle traders’ family had expressed concern about attending the event.

Nadeem said, “The police are doing what they had promised – they have arrested two people. The FIR is registered on the basis of complaint by Samiuddin’s family. My brother Salim is a witness whose statement will be recorded.”