Happy New Year 2020 Celebrations Images, Photos Highlights: Partygoers in Dubai were left mesmerised by a laser and fireworks show at the Burj Khalifa while a million revellers thronged Sydney Harbour and nearby districts to watch fireworks explode above the city.

Happy New Year 2020 Celebrations Highlights: The world ushered in the new year with spectacular fireworks across various parts such as Sydney, Tokyo, Dubai and India. However, celebrations in Australia were dampened by deadly wildfires, whereas protests were the backdrop of festivities in Hong Kong. India also witnessed a similar scene with protests in certain parts of the national capital.

Partygoers in Dubai were left mesmerised by a laser and fireworks show at the Burj Khalifa while a million revellers thronged Sydney Harbour and nearby districts to watch fireworks explode above the city, even as thousands of people along Australia’s eastern seaboard sought refuge from the bushfires on beaches. Due to Australia’s geographical position being close to the International Date Line, it was one of the first countries in the world to welcome the New Year. In Canberra, fireworks were cancelled and event organisers said other activities, including live music performances, could also be cancelled.

At New York’s Times Square, the world-famous ball drop is the best place to witness the fireworks. Thousands of police officers were on duty for night’s festivities, along with specialised units armed with long guns, bomb-sniffing dogs and other measures.

New Year’s Day, which according to the Gregorian calendar falls on January 1, is one of the most popular occasions across the globe and people irrespective of religion, caste and creed celebrate it in their own ways. In many countries, people begin their celebrations on December 31, which continue until the wee hours of January 1.  Merry-makers meet with their near and dear ones, hold themed parties, play games and ring in the New Year with great joy and gusto. In many places, the first day of the year is observed as a holiday.

New Year's 2020 celebrations from around the world. Follow LIVE updates

India Gate saw several visitors on the first day of the new year as people came out to celebrate in large numbers.

Delhi: People at India Gate on the first day of the year. #NewYear pic.twitter.com/kN4dnUKw5j

Massive traffic snarls were witnessed in Delhi on Wednesday as scores of people flocked to India Gate and Connaught Place for New Year celebrations. Entry and exit gates of five Delhi Metro stations were closed in the evening to ease rush of passengers. The Delhi Traffic Police has been constantly alerting commuters about the vehicular traffic through its official handle on Twitter to avoid any inconvenience. Commuters were stuck in traffic jams on roads leading to India Gate, Connaught Place and ITO. Read more

In his New Year message, British Prime Minister Boris Johnson has vowed that the first item on his agenda in 2020 is to fulfil the will of the electorate and to conclude the UK's divorce deal with the European Union within this month. "As we say goodbye to 2019 we can also turn the page on the division, rancour and uncertainty which has dominated public life and held us back for far too long," he said. "We can start a new chapter in the history of our country, in which we come together and move forward united, unleashing the enormous potential of the British people," he added.

The rupee kick started 2020 on a positive note with gains of 14 paise against the US currency on the first trading day of the New Year on Wednesday. The domestic currency settled at 71.22 against the previous close of 71.36 as positive macro data and optimism over the US-China trade deal boosted the investor sentiment. (PTI)

Nine people died after torrential rains hit Indonesia's capital Jakarta in one of the deadliest flooding on New Year's Eve. Electricity was switched off in hundreds of waterlogged neighbourhoods across greater Jakarta, with some train lines and one of the city's airports also shut. "We're hoping that the floodwaters will recede, but if the rain keeps up it'll continue," an official said.

As many as 57 people were arrested from the city for their alleged involvement in various crimes on the New Year's eve, police said on Wednesday. Of the total arrests, 40 were made as preventive measures while 17 people were apprehended from different parts of the city for allegedly committing crimes such as eve-teasing, drunken driving and rash driving, a senior officer said. "Several other arrests were also made on the New Year's eve. We are accumulating the total figure," he said. (PTI)

Delhi witnessed massive traffic snarls on Wednesday as as people stepped out for New Year celebrations, officials said. The Delhi Traffic Police has been constantly alerting commuters about the vehicular traffic through its official handle on Twitter to avoid any inconvenience. "Traffic movement is closed on Jai Singh road from Ashok road side due to heavy volume of vehicles," the Delhi Traffic Police said in a tweet. "Traffic will remain heavy from Raja Garden towards Punjabi Bagh due to ongoing work by PWD. Kindly avoid the stretch," it tweeted. (PTI)

Thousands of people protesting against the Citizenship Amendment Act (CAA) at Delhi's Shaheen Bagh rang in 2020 with singing the national anthem. As the clock struck 12, the protesting crowd burst into a cheer to greet the fellow protesters the new year, and moments later broke into the national anthem in unison which was followed by the slogan "Inquilab Zindabad". Several roamed around waving national flags while others displayed creative placards against the new law and chanted "Aazadi, Aazadi". (PTI)

In his New Year message to youths of Gujarat, Chief Minister Vijay Rupani said on Wednesday that over 34,000 vacant government posts in the state would be filled up this year and urged the youths and students to have faith in the dispensation led by him. "A lot of confusion has been created since sometime among youths and students by some people for political gains. I want to tell you that my government will ensure that the hard work of youths does not go in vain," Rupani said in a video message shared on his Facebook account. "In the last three years, we have given government jobs to 1.18 lakh youths. In the current year, we will conduct recruitments to fill up another 34,000 to 35,000 government posts," he added. (PTI)

778 fined for drunk driving, 1100 for traffic rules violation in Mumbai

As many as 778 people were fined for drunk driving, while 1,100 were booked for various other traffic rules violations in Mumbai during the New Year celebrations, police said on Wednesday. "During checking, 578 people riding two-wheelers and 200 driving four-wheelers were fined for drunk driving," a senior police official said. "We also penalised 1,100 motorists for violating traffic rules. Of these, 601 were caught for jumping signals, 258 for riding triple seat and 241 for over-speeding," Joint Commissioner of Police (Traffic) Madhukar Pandey said. (PTI)

400 held in Ahmedabad for drinking, possessing liquor on New Year

Over 400 people were arrested for consumption or possession of liquor during the New Year celebrations in Gujarat's Ahmedabad city, police said on Wednesday. "As many as 368 people were arrested for consumption of liquor, while 41 others were held for possessing liquor last night," Deputy Commissioner of Police (Control) Vijay Patel said. "No untoward incident was reported from any part of the city and the celebrations went off peacefully," he added. (PTI)

Union minister Giriraj Singh on Wednesday extended new year greetings to the nation in his trademark style. "Our new year begins with Pratipada (the first date of a month as per Hindu calendar). We derive our identity from Sanatana, from Lord Shri Ram. Bharatvarshis - what relationship do we share with each other? It is Jai Shri Ram, Jai Shri Ram. Best wishes for the administrative new year," Singh tweeted in chaste Hindi. (PTI)

Will create a prosperous country for all communities to live in peace: Rajapaksa

May the #NewYear 2020 brings with it new hope, a new dawn and happiness for everyone. #HappyNewYear

Delhi Police issued a total of 352 challans for drink-and-drive cases on the eve of New Year, officials said on Wednesday. Security was beefed up across the national capital, especially in the vicinity of markets, malls, five-star hotels, restaurants, pubs and bars, in order to ensure orderly celebrations. All PCR vans, Raftaar motorcycles and Prakhar vans were dynamically deployed at vulnerable points, according to police officials. (PTI)

US President Donald Trump tweeted Happy New Year in caps, whereas, in another tweet, he shared a video of him and his wife Melania Trump attending a NYE party.

Mumbai protests party: An evening of music and poetry on NYE anti-CAA

After being denied permission to hold a "protest party" at Carter road amphitheatre, groups of people protesting CAA gathered at the venue for some music and poetry on New Year's eve. 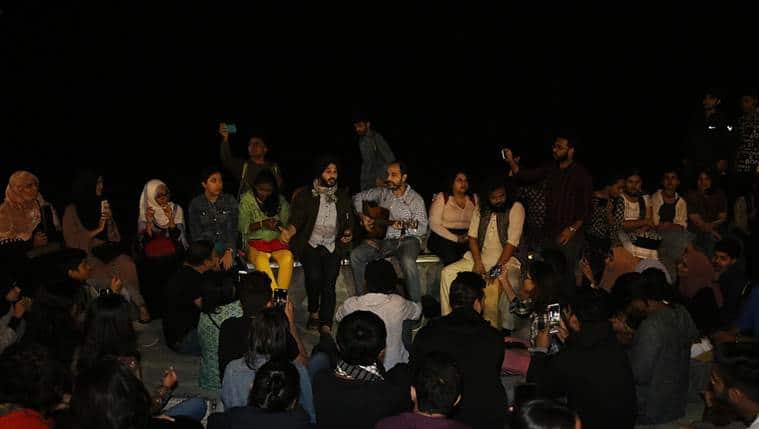 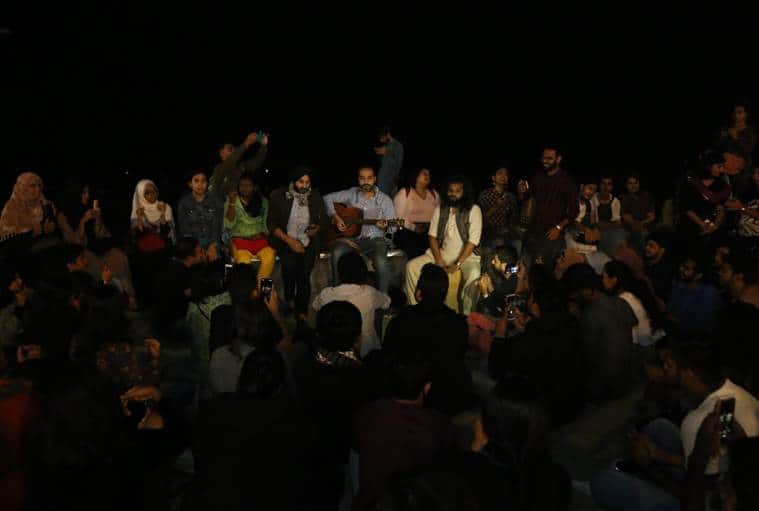 In many countries, people begin their celebrations on December 31, which continue until the wee hours of January 1

It is believed that ever since the modern calendar came into being, civilizations around the world have been observing the New Year’s Day festivities, making resolutions, watching the fireworks and making elaborate and not-so-elaborate plans for the new year.

It is believed the earliest recorded festivities happened some 4,000 years ago, in ancient Babylon, wherein the equinox in March — equal duration of day and night — served as the beginning of a new year. During the reign of Julius Caesar, 90 extra days were added to the year, so as to align the Roman calendar with the sun. As such, the Julian calendar was introduced to the world, which resembles the modern-day Gregorian calendar.

Around this time, January 1 was recognised as the first day of the year to honour Janus — the Roman god of beginnings — who, it is believed, had two faces with which he looked at both the past and the future. Back in the day, the Romans made sacrifices to Janus, decorated their houses and exchanged gifts.

Later, in medieval Europe, the new year held a more religious significance, with Christian leaders insisting on celebrating the day on December 25, to mark the birthday of Jesus Christ. In the year 1582, Pope Gregory XIII re-established January 1 as New Year’s Day.

Thousands of Hong Kong revellers welcomed in 2020 on neon-lit promenades along the picturesque Victoria Harbour, breaking into pro-democracy chants as the clocks struck midnight after more than half a year of often violent unrest. Indonesia, Thailand, and China also welcomed the new year.