Gujarat Governor Acharya Devvrat has said that Bhupendra Patel will be sworn in as the CM at 2:20 pm on Monday.

A day after the exit of Gujarat Chief Minister Vijay Rupani and his cabinet, Ghatlodia MLA Bhupendra Patel was picked to be the next CM of the state. He will take oath as CM on Monday afternoon.

The decision to pick Patel was taken at the BJP legislature party meeting in Gandhinagar on Sunday. His name was proposed by CM Vijay Rupani, whose resignation from the post on Saturday surprised many. Most of the 112 MLAs of the party in the 182-member Assembly were present at the meeting, BJP sources told PTI.

Anandiben Patel had represented the Ghatlodia constituency before she was appointed Governor.

Speaking to the media, Bhupendra Patel expressed gratitude towards PM Narendra Modi, BJP national president J P Nadda and Union Home Minister Amit Shah while adding that the blessings of former Gujarat CM and Uttar Pradesh Governor Anandiben Patel have always been with him. Patel added that he is going to Raj Bhavan at 6 pm today to stake claim to form government. He is going to take the oath of office and secrecy on Monday, and the council of ministers will be declared soon.

Patel had won the 2017 Gujarat Assembly polls from the Ghatlodia constituency, defeating Congress candidate Shashikant Patel by over one lakh votes. It was the highest winning margin in the 2017 Gujarat polls. He holds a diploma in civil engineering and is considered to be close to former CM Anandiben Patel, who had won from the seat in the 2012 polls. Patel, a first-time MLA, is a member of the Patidar community. He has also held the positions of president of Memnagar municipality in Ahmedabad, standing committee chairman of Ahmedabad Municipal Corporation and Ahmedabad Urban Development Authority.

Patidar leader Hardik Patel on Sunday said that Bhupendra Patel, who also belongs to his community, would be the BJP's last chief minister in Gujarat as the people of the state have decided to throw the saffron party out of power at least for the next 25 years.

In an open letter addressed to the CM-designate, Hardik Patel, who is Gujarat Congress's working president, asked what he can achieve in one year (as Assembly polls are scheduled next year) that the BJP could not in the last 25 years.

"BJP has given you this responsibility a few months before the elections to hide its failure, but what can you do in one year (Assembly election is due in Gujarat in December 2022) what your party could not do in 25 years for education, health, women, youth and farmers, for the most vulnerable sections of Gujarat?" he asked and said this is a question that the people of Gujarat have posed before him.

"The BJP has appointed in you its last chief minister, because the people of Gujarat have made up their mind to throw the anti-poor, anti-youth BJP out of power, at least for the next 25 years. Now time has come to change the entire government and not just the chief minister," Hardik added. (PTI)

Gujarat CM-designate Bhupendra Patel receives a grand welcome on his arrival at his office in Ghatlodia.

Gujarat CM-designate Bhupendra Patel receives a grand welcome on his arrival at his office in Ghatlodia. pic.twitter.com/dYfkfNBuEP

“It's like Diwali today. This was never expected…a complete surprise for our family, even we saw it on news,” says Bhupendra Patel's daughter-in-law Devanshi Patel.

It's like Diwali today. This was never expected, a complete surprise for our family, even we saw it on news: Gujarat CM-elect Bhupendra Patel's daughter-in-law Devanshi Patel on her father-in-law being chosen as state CM. pic.twitter.com/XHFYPDBxyN

Supporters of Bhupendra Patel gather outside his office

Scores of supporters gather outside Gujarat CM-designate Bhupendra Patel's office in his constituency.

Scores of supporters gather outside Gujarat CM-designate Bhupendra Patel's office in his constituency Ghatlodia. His oath-taking is scheduled to be held tomorrow. pic.twitter.com/OVkRO6oiVp

Bhupendra Patel to be sworn in at 2.20 pm on Monday, says Governor

Bhupendra Patel to be sworn in as Gujarat CM at 2:20 pm on Monday, says Governor Acharya Devvrat.

Delhi MLA Raghav Chadha on Sunday claimed that the BJP was "forced" to change chief ministers in Uttarakhand and Gujarat after facing a challenge from the Aam Aadmi Party (AAP) in the two states.

The AAP national spokesperson also criticised the Congress while terming it an "ineffective, compromised and unsuccessful opposition".

"The AAP challenged the BJP by saying 'perform or perish', which forced the BJP to change its CMs in both the states. Such is the power of the AAP and Shri Arvind Kejriwal. I want to tell the people of the BJP that changing nameplates will not change the anger and resentment that the people of Uttarakhand and Gujarat have for you," Chadha said during a press conference here.

He added that a "convenient game of musical chairs" was being played by the BJP and the Congress in which they rule for five years each. "When one party is in power, the other helps from outside and upon a power switch, they return the favour. There is an understanding in these parties, which has resulted in Uttarakhand and Gujarat both, being devoid of a strong opposition and a strong government," he said. (PTI)

Soon after it was announced that Bhupendra Patel will be the successor of Vijay Rupani, young Patidar leader and Gujarat Congress working president Hardik Patel on Sunday said that the people of Gujarat won’t feel that they have a strong connection with the new chief minister as he has been “appointed by Delhi”.

Speaking to The Indian Express about the development, Hardik Patel said, “The letter of appointment for this CM has come from Delhi and the people of Gujarat know this. They wanted a chief minister who could connect to them and listen to their woes. I don’t think this CM will be successful as people will ultimately see him just as a BJP face.” Read more 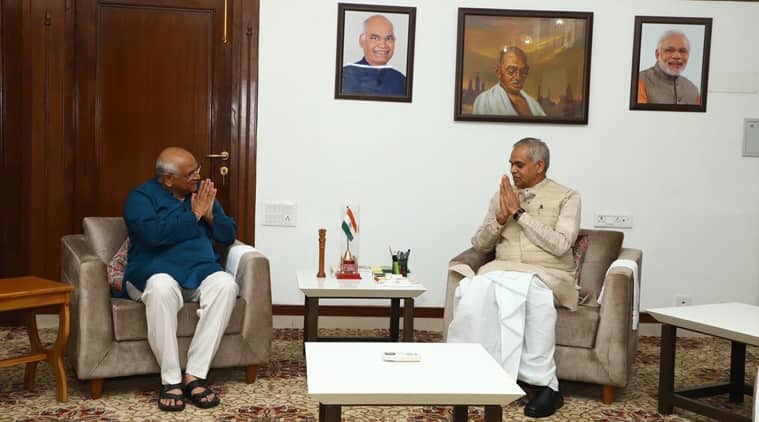 Bhupendra Patel (59), who will replace Vijay Rupani as CM, is fondly called 'Dada' by many. People close to him know Patel as a smiling face, who is well-connected to the grassroots.

Before contesting the Assembly election, he was active in local politics and became a member of Memnagar Municipality in Ahmedabad district, serving as its president twice.

Patel is also a trustee of Sardardham Vishwa Patidar Kendra, an organisation to dedicated to the socio-economic development of the Patidar community. (PTI)

Bhupendra Patel chosen as Gujarat CM so that govt can be ‘remote-controlled’ by Anandiben: Congress

Soon after it was decided that Bhupendra Patel, the first-time MLA from Ahmedabad’s Ghatlodia constituency, will be the next Gujarat Chief Minister following Vijay Rupani’s exit, state Congress on Sunday claimed that the government will now be “remote-controlled” by Anandiben Patel.

Anandiben Patel had stepped down as the Chief Minister in 2016, after which she was replaced by Vijay Rupani. Read more

Bhupendra Patel to take oath as CM on Monday

Patel added that he is going to Raj Bhavan at 6 pm today to stake claim to form government. He is going to take oath of office and secrecy on Monday, and the council of ministers will be declared soon. “We will be going to the Raj Bhavan at 6 pm. We will meet the Governor regarding the appointment of the new Gujarat CM,” says Union Minister & BJP leader Bhupender Yadav. (ANI)

“Bhupendra Patel is capable. We believe BJP will win the upcoming elections in the state under his leadership,” says outgoing CM Vijay Rupani. (ANI)

Who is Bhupendra Patel, the next Gujarat CM?

A day after Vijay Rupani tendered his resignation from the post of Gujarat Chief Minister — the third BJP CM to exit in two months — first-time MLA Bhupendra Patel was named his successor. But who is Bhupendra Patel? Read more here

Bhupendra Patel (55) was unanimously elected BJP legislature party leader on Sunday. His name was proposed by CM Vijay Rupani, whose resignation from the post on Saturday surprised many.

Most of the 112 MLAs of the party in the 182-member Assembly were present at the meeting, BJP sources said.

Patel won the 2017 Gujarat Legislative Assembly elections from Ghatlodia constituency, defeating Congress candidate Shashikant Patel by over one lakh votes, the highest winning margin in the 2017 Gujarat polls. He holds a diploma in civil engineering and is considered close to former CM Anandiben Patel, who won from the seat in 2012 polls.

Bhupendra Patel's name was not in the long list of probables being discussed in state political circles and in a way the first term MLA emerged as the dark horse, a political observer told PTI.

Rupani along with cabinet members and Governor Devvrat. (Photo: CMO)

When asked about his sudden resignation, Rupani said, “It is a natural process in our party. The party worker gets different responsibilities at different times. We do not call it a post, we call it a responsibility. Now, I will shoulder whatever responsibility the party gives me.”

“This is a relay race. Everybody runs and moves ahead. I had the responsibility for five years. I was running. Now, I will give the flag to someone else. (Now) He will run,” Rupani added.