Gujarat Election Dates Highlights: Voting in two phases on Dec 1 and 5; results on 8 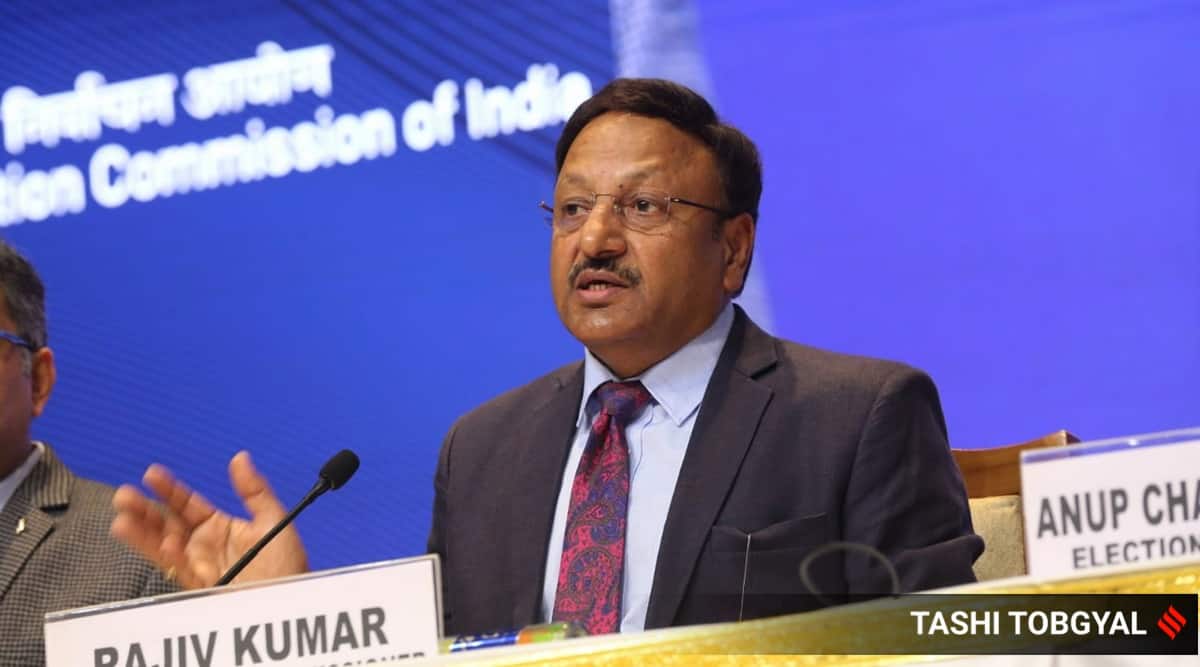 Gujarat Assembly Election News Highlights: The Gujarat Assembly elections will be held in two phases on December 1 and 5, and the results will be declared on December 8, the Election Commission announced Thursday. Of the 182 seats in the legislative Assembly, 89 will go to polls in the first phase and 93 in the second. There are over 4.9 crore electors eligible to vote this year. There will be more than 51,000 polling stations set up, including more than 34,000 in rural areas.

Chief Election Commissioner Rajiv Kumar, before announcing the schedule, expressed condolences to the victims of the Morbi bridge tragedy. He said there was a delay in announcing the poll schedule due to the accident that killed at least 135 people.

The term of the Gujarat Assembly ends on February 18, 2023. With the announcement of the election schedule, the Model Code of Conduct comes into effect in the state. The Centre has deployed 160 companies of the Central Armed Police Forces ahead of the polls.

The much awaited, high-stakes elections are seeing a three-cornered contest between the Bharatiya Janata Party (BJP), the Congress and the Aam Aadmi Party (AAP). The BJP has been in power in the state — Prime Minister Narendra Modi’s home turf — for over two decades. In the last election in 2017, the BJP won 99 seats, while the Congress won 77, winning 49.05 per cent and 42.97 per cent of the votes, respectively. Over the years, the Congress’ tally reduced to 62, while the BJP’s increased to 111. 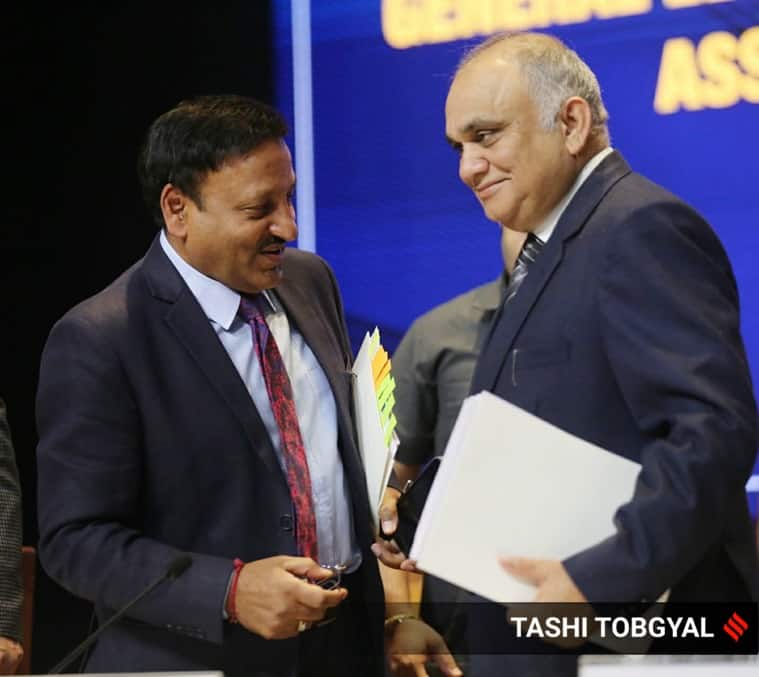 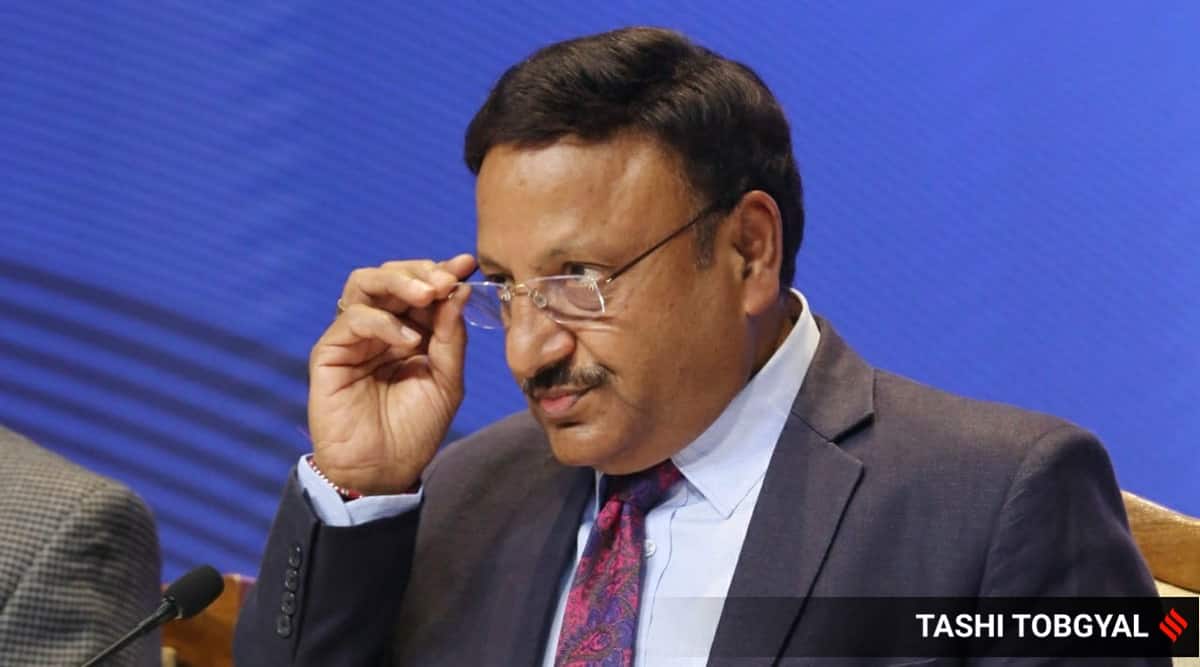 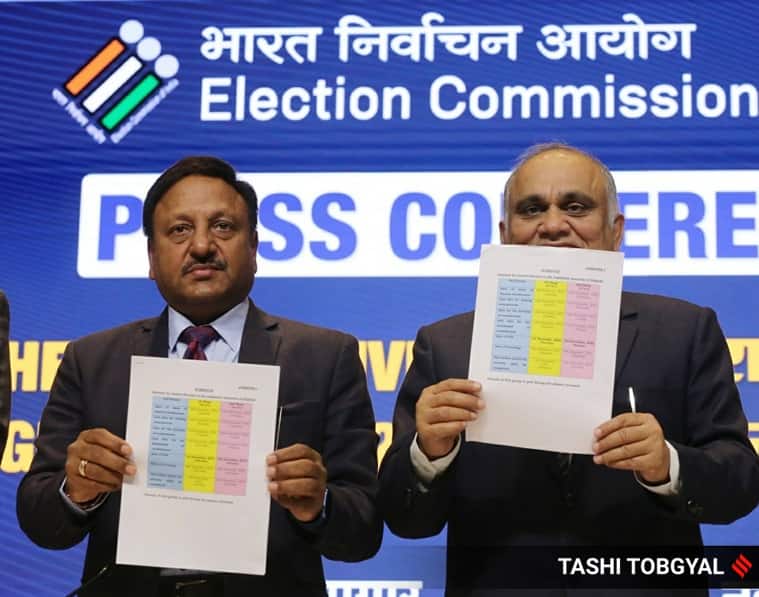 Gujarat votes on December 1, 5; BJP got nearly half the votes last time

While the number of seats the BJP won dropped in 2017 compared to 2012, it actually got more votes. In 2012, when Modi was still CM, the BJP had won 115 seats and 47.85% votes. The Congress tally was 61 seats and 38.93% votes, indicating the huge jump the party would make five years later, largely on the strength of the Patidar quota agitation against the BJP government. In 2012 too, the two parties had virtually no third competitor. Read more here

Composition of Gujarat Assembly in 2017

Now, the state is witnessing a three-cornered contest between the BJP, Opposition Congress and the AAP. All eyes are on the polls in Gujarat ahead of the 2024 Lok Sabha elections, when the BJP will bid for a consecutive third term at the centre.

Once the official notification for the election is published, the Model Code of Conduct comes into effect in Gujarat.

What is the MCC? The MCC is a code that aims to provide a level-playing field for all players during elections by guiding the conduct of the incumbent government, other political parties and candidates in the fray. The government in power, for example, cannot announce any decisions that could potentially influence voters. MCC comes into effect from the date of announcement of poll dates and lasts up to the day of voting.

Date of counting: December 8 (Both phases)

Gujarat will vote in two phases on December 1 and 5, and the results will be declared on December 8, the Election Commission has announced.

ICYMI | Parties get Rs 545 crore through electoral bonds ahead of Himachal, Gujarat polls

Ahead of the Assembly elections in Himachal Pradesh and Gujarat in the next two months, political parties received Rs 545 crore in the 22nd sale of anonymous Electoral Bonds (EBs) conducted between October 1 and 10, according to data available from State Bank of India (SBI). The total amount collected by parties has gone up to Rs 10,791 crore from various anonymous donors in 22 phases since 2018 when the Electoral Bond Scheme was introduced. Political parties received EBs worth Rs 389.50 crore from donors in the previous sale in July this year. Read more here

The gin boom trying to change India, one distillery at a time
Hundreds join Sonam Wangchuk on final day of his 5-day hunger strike on i...
Lakshadweep in SC against suspension of MP’s conviction by Kerala HC
Dispute over Shiv Sena name, symbol: Both factions submit written stateme...
Indian Express subscriptions, newsletter win top honours at 2022 South As...
More from India >>
Gujarat Elections: Over 4.9 crore electors eligible to vote

The Chief Election Commissioner says there are over 4.9 crore electors eligible to vote in the Gujarat polls. There will be more than 51,000 polling stations set up, including more than 34,000 in rural areas, for electors, he adds.

Before announcing the schedule, the Chief Election Commissioner Rajiv Kumar expresses condolences for the victims of the Morbi bridge collapse.

Here is key information on Himachal Pradesh, which goes to polls in a single-phase on November 12. 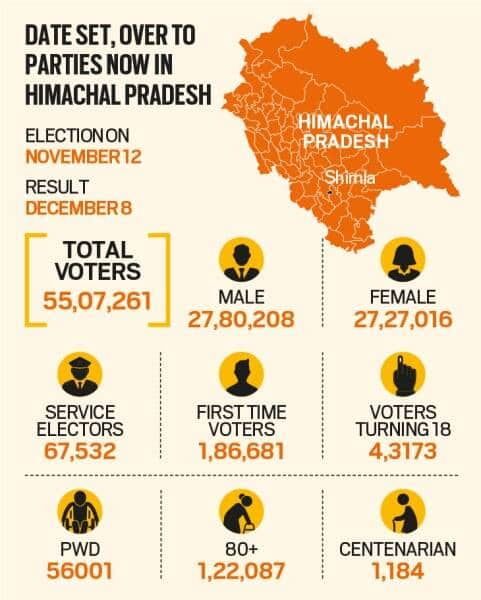 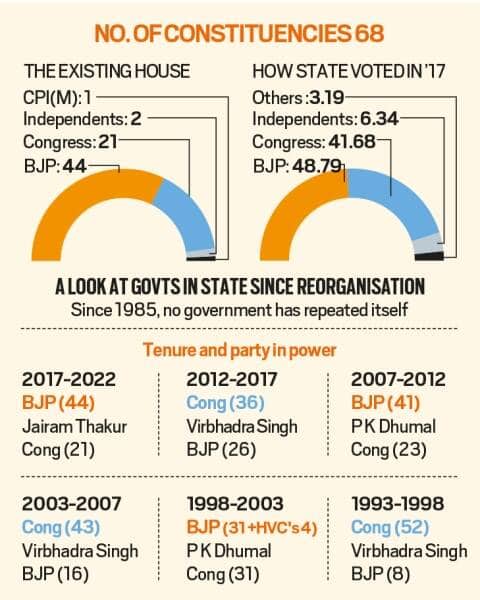 The Election Commission normally holds elections together in states where incumbent governments are completing their five-year terms within six months, and announces the poll dates for these states simultaneously. This year, however, when it announced the poll schedule for Himachal Pradesh - voting on November 12 and results on December 8 -- it refrained from releasing dates for Gujarat. Chief Election Commissioner Rajiv Kumar said announcement of multiple state polls together leads to longer wait-time for the declaration of results for some. Read more here

The Election Commission is likely to announce the schedule for the Gujarat Assembly elections today. The poll body has called a press conference at noon in New Delhi. Ahead of the announcement, the Centre has deployed 160 companies of the Central Armed Police Forces (CAPF) to the state.

JUSTIN:Ahead of the Legislative Assembly elections in Gujarat,the centre has sent close to 160 companies of CAPFs in the state. Special trains were booked for the easy transportation of the personnel.The EC will announce schedule of Gujarat Assembly elections today.@IndianExpress

Last month, on October 14, the EC had announced elections to the Himachal Pradesh Assembly, which will take place on November 12 in a single-phase followed by counting of votes on December 8. At the time, the EC refrained from announcing dates for Gujarat, with Chief Election Commissioner Rajiv Kumar saying, "We are following past precedent in keeping the announcement of dates for Gujarat in abeyance for now."

Announcement of multiple state polls together, the CEC said, leads to longer wait-time for the declaration of results for some.

The EC normally holds elections together in states where incumbent governments are completing their five-year terms within six months, and announces the poll dates for these states simultaneously.