“Completely meeting requirements of revised environmental norms by December 2017 may not be feasible,” admits the office of Ravindra Kumar Verma, chief of CEA. Faced with the fact that almost none of the over 400 thermal power plants across the country has complied with new emission norms notified more than a year ago, the Government is learnt to have decided to relax the December 2017 deadline — and even dilute the standards it had set.

It was in December 2015 that the Environment Ministry laid down, for the first time, emission norms for Nitrogen and Sulphur oxides (NOx and SOx) for thermal plants. It also fixed stricter limits for particulate matter (PM) emission and consumption of water.

Short of a year to the deadline, none of the units has fully complied.

“Completely meeting requirements of revised environmental norms by December 2017 may not be feasible,” admits the office of Ravindra Kumar Verma, chief of the Central Electricity Authority (CEA).

Asked why, it said that the power utilities have demanded “relaxation of standards” due to technological issues, huge civil work, very high capital cost and non-availability of space in existing plants to accommodate green technologies.

This non-compliance flies in the face of the Clean Coal Policy declared in India’s Intended Nationally Determined Contribution towards climate justice in October 2015 and the claims made in last week’s Budget to promote clean energy by adding 20 GW of solar power capacity.

The non-compliance shouldn’t come as a surprise.

For, right from the draft stage to the post-notification phase, the move to raise the bar faced stiff resistance from within the government and the industry.

In June 2015, the biggest player in the sector, National Thermal Power Corporation (NTPC), in its comment to the Environment ministry wrote that the proposed norms were “much more stringent than (those) prescribed by World Bank and even. China in some parameters.”

The same month, in a separate response to the said draft, the Union Power Ministry attached a table listing emission norms for thermal plants in China to argue that India’s were tougher.

On paper, the Chinese standards attached with the Power Ministry’s response were indeed a lot more generous than those proposed for India. The catch: this was data from four years earlier and China had long revised and upgraded these standards to levels far more stringent than those notified by India in 2015.

When asked to explain the non-compliance, an NTPC spokesperson said that the “CEA is preparing a phasing plan for implementation of new environmental plan. (which) is expected by March 2017” and that “NTPC shall formalise the action plan. subsequent to phasing plan by CEA and revision in the new norms” (as applicable).”

The Environment Ministry itself is to blame as well.

It did not specify the new standards on a number of occasions while appraising or issuing clearances to thermal plants post-notification.

For example, environmental clearances given to NTPC’s Ramagundam plant in January 2016 and to KU Thermal Power Private Ltd’s super critical project in Tamil Nadu in March 2016 said emissions standards for particulate matter should not exceed 50 mg/Nm3 (normal cubic metre) even though the plants were to be commissioned in 2018 and were required to limit emission to 30 mg/Nm3.

Asked to explain this, the Ministry told the National Green Tribunal that the terms were “inadvertently not amended” while issuing the approved clearance. 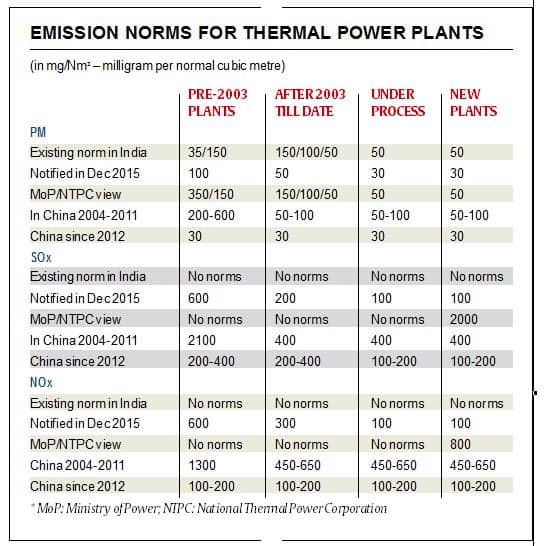