Accusing Dhankhar of acting “more dangerously than a BJP mouthpiece”, Banerjee said the Governor should not take any vindictive steps against state university vice-chancellors who skipped a virtual meeting he had called on Wednesday. The West Bengal Governor and the state government got into another round of war of words on Thursday after Chief Minister Mamata Banerjee dismissed Governor Jagdeep Dhankhar’s remarks that the state education system is “politically caged and controlled”, which is harming interests of students.

Accusing Dhankhar of acting “more dangerously than a BJP mouthpiece”, Banerjee said the Governor should not take any vindictive steps against state university vice-chancellors who skipped a virtual meeting he had called on Wednesday.

All but one V-Cs of state-aided varsities had skipped the meeting, convened to discuss the academic situation in the state during the Covid-19 pandemic.

Addressing the media at the state secretariat hours after Dhankhar accused the state government of creating this “unwholesome situation” in the education system, Banerjee said: “Despite being elected representatives, we are expected (by Governor) to behave like servants…and have to answer (him) every moment. We are in regular touch with the Governor — I spoke with him four times on Wednesday. What will the (state) government do: tackle the pandemic or continue answering his queries? Enough is enough.” 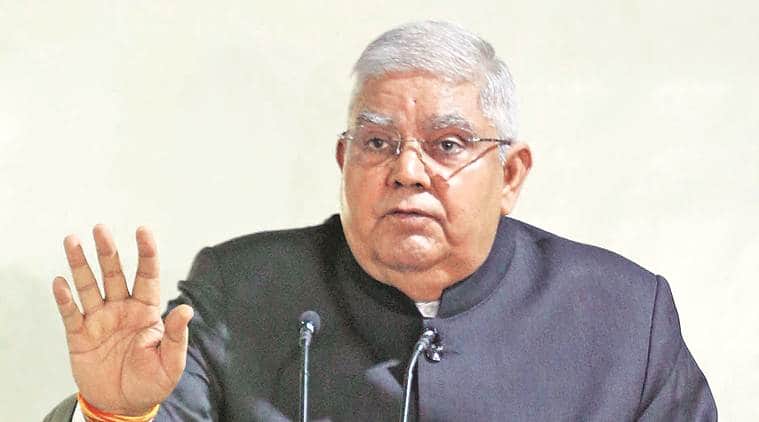 Earlier in the day, Dhankhar had sought an explanation from the V-Cs for skipping the meeting. “Education is the soul of a society, as it passes from one generation to another. It is unfortunate that in our state education is politically caged and controlled. The political grip on education is tightening — it will hurt students, the education scenario, and the society at large,” he said.

Dhankar, who has had several run-ins with Banerjee and the TMC government, asked the CM, state Education Minister Partha Chatterjee and all V-Cs, “who have been denying to come forth to grapple with these issues so acutely faced by students”, about their response to the crisis so far as education is concerned. “They must come out in black and white…they have been elected, selected and funded by the people,” he said.

The state government had recently amended rules relating to powers of the Governor as chancellor of universities. Under the new rules, communications between the Governor and universities have to be routed through the state Higher Education Department.

Indicating this, Dhankhar asked, “Can the Education Department and V-Cs say that they cannot be commanded by a chancellor? Are they not accountable? When (will) they become accountable…”

In reply, Banerjee said V-Cs of state-run universities “should not worry”. She said: “All of them are respected (academics) and they will continue to work in the manner they have been working. They have our 100-per cent support. If any vindictive action is taken against vice-chancellors, the people of Bengal will not keep quiet. If someone thinks he will take steps forcefully, then let us fight the battle politically and democratically.”

The state Higher Education Department said in a letter to the Raj Bhavan that Dhankhar is not authorised to call any meeting of V-Cs of state universities since there was no provision in the law.

In a strongly worded letter addressed to OSD to the Governor, the special secretary of the department maintained that the rules mandate “every communication proposed to be made by the chancellor to any state-aided university will have to be routed through the higher education department”.

Mumbai: 70-yr-old duped by woman he was planning to marry