While they stuck to their demands, farmer leaders said they were ready to hold talks with the government provided they discussed repealing the three new farm laws before anything else. 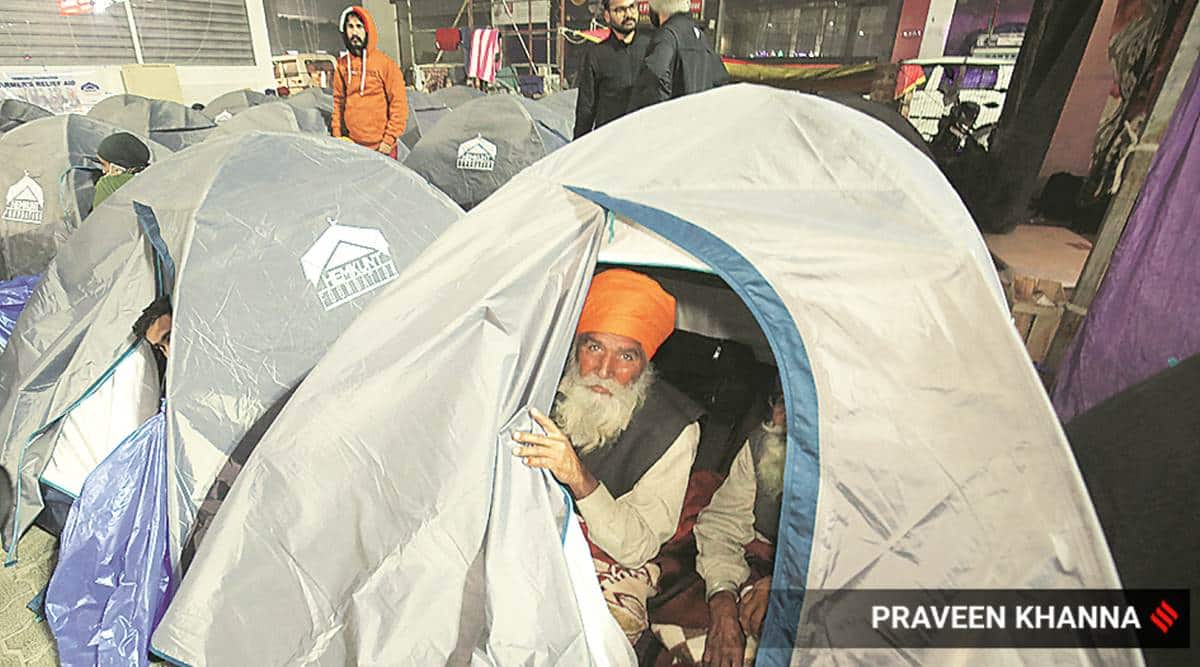 Farmers in tents at the Singhu border Saturday. (Express photo by Praveen Khanna)

As Union Agriculture Minister Narendra Singh Tomar held talks on Saturday with ministerial colleagues, Haryana Deputy Chief Minister Dushyant Chautala, and a group of farmer leaders who support the new agricultural laws, there appeared to be no breakthrough in the standoff with farmers.

While they stuck to their demands, farmer leaders said they were ready to hold talks with the government provided they discussed repealing the three new farm laws before anything else. They also announced intensification of protests.

Asked about the next round of talks after his meeting with Tomar, Union Minister of State for Commerce and Industry Som Prakash, one of the three ministers holding talks with farmer leaders, said, “Ultimately we have to hold a meeting. There is no other way.”

Following his meeting with Tomar, Chautala said, “I am hopeful that in the next 28 to 40 hours there will be another round of talks and some conclusive statement can come.” Asked whether the Centre would give statutory recognition to its written assurance to farmers on continuing the MSP system, Chautala said, “Whatever they (the farmers) demand.”

Addressing a press conference at Singhu on the Delhi-Haryana border, Kanwalpreet Singh Pannu, president of the Kisan Sangharsh Committee, Punjab, announced a Delhi Chalo March on the Jaipur-Delhi highway, starting from Rajasthan’s Shahjahanpur, on Sunday morning. He said farmers were coming from other states to join them, including women once provisions had been made for toilets, and also announced a hunger strike on December 14. “We will not refuse a meeting with the government,” Pannu said, “If the government wants to have a discussion, we are ready for that. But our main demand is that the three laws be scrapped… Until these laws are repealed, we will not go onto the fourth or fifth demand.” He reiterated that the laws were not made for farmers but traders.

Read | Farmers’ concern: Will lose land to corporates because of the new laws

Chautala, who also met Defence Minister Rajnath Singh and Railway Minister Piyush Goyal, said a solution could be found only through dialogue. “Umeed par duniya kayam hai (The world rests on hope),” he said. The Haryana leader added that the Centre’s efforts to engage farmers and its 24-page reply to their demands were signs that it wanted a solution.

With the Congress planning a no-confidence motion amidst reports of a division among the JJP’s 10 MLAs, who are part of the BJP-led government in Haryana, Chautala said there was no instability in the coalition, adding, “We stand firm on the issue of the MSP. Till I am in the government, we will ensure MSP to each and every farmer.”

After his meeting with Chautala, Tomar held discussions with a group of 29 farm leaders from Haryana, led by BKU (Mann) state leader Guni Prakash, who said they back the three laws, after the amendments proposed by the government to the farmers, and gave Tomar a “samarthan patra (a letter of support)” on the same. “The ongoing protests are led by vampanthis (the Left) and those who do tod-phod (violence). It is no more a peasant movement, it has taken on political colours,” Prakash said.

He added that they would protest if the government repealed the laws. “Everyone has the right to protest… Farmers will get real freedom through the laws.”

Explained | Lay of their land

Tomar said the “progressive” farmers from Haryana shared with him their experiences regarding how the farm laws were benefiting them.

Som Prakash was accompanied to his meeting with Tomar by Punjab BJP president Ashwani Kumar Sharma, BJP organisation general secretary (Chandigarh and Punjab) Dinesh Kumar and other senior leaders, who reportedly apprised the government of the situation on the ground.

As part of their protests on Saturday, farmers in Haryana forced free movement through toll plazas at several places, meeting little resistance from the authorities. A police officer said the toll company would be compensated adequately for the losses. Haryana DGP Manoj Yadav said the protests were peaceful.

The All India Kisan Sangharsh Coordination Committee thanked people for making the “toll free call a grand success”, saying the symbolic move was meant to “bring out the exploitative character of corporate companies (running the tolls)”.

Haryana tried to stop farmers making their way from Punjab to join the toll protest, blocking the Dabwali, Jind and Fatehabad borders, and deploying water cannons and boulders on the roads. However, farmers removed the boulders with the help of tractors, and made their way through, with the police often missing. The plan for a procession of combined harvester machines to Delhi, however, was abandoned.

Read | Ugrahan wears his politics on his sleeve: ‘Called us Pak, now Naxals’

Haryana Kisan Manch leader Gurprem Singh said,”Haryana will clear the way for Punjab if its government dares to seal the borders again. Younger brother (Haryana) will not let elder brother (Punjab) suffer.” Rajinder Singh, general secretary of the Krantikari Kisan Union, said, “I really wonder why Haryana is trying to stop the entry of Punjab residents again and again. We are not from Pakistan.”

Pannu accused the government of trying to weaken the agitation, but said the farmers would ensure there was no violence.

DGP Yadav, however, said the Haryana borders had not been sealed, though they were ready to do so if needed.

With inputs from Raakhi Jagga in Ludhiana, Sukhbir Siwach in Hisar