Three persons were taken into custody in connection with the incident, officials of the Travancore Devaswom Board (TDB), which manages the hill shrine, said. 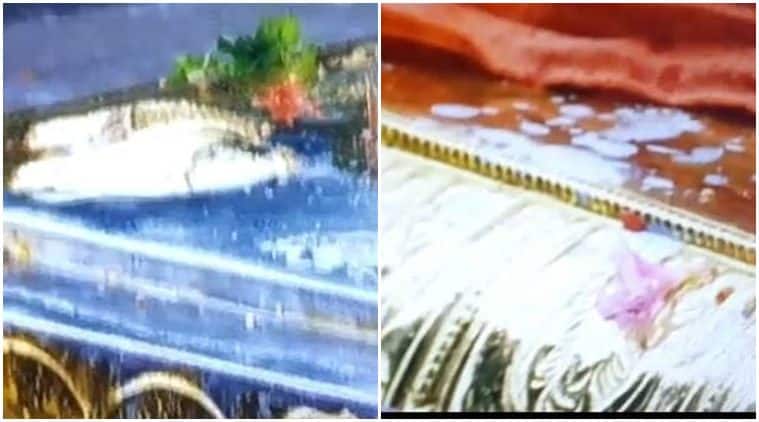 The newly-installed gold plated mast at the famed Lord Ayyappa Temple in Sabarimala was found damaged on Sunday, triggering widespread concern among devotees. Three persons were taken into custody in connection with the incident, officials of the Travancore Devaswom Board (TDB), which manages the hill shrine, said. Sabarimala, dedicated to Lord Ayyappa, attracts millions of devotees across the country and abroad during the three-month annual pilgrimage season from November-January.

Chief minister Pinarayi Vijayan directed police to carry out a detailed inquiry into the incident and apprehend the culprits. “Top police officials and forensic experts have rushed to the sannidhanam (temple premises),” he said in a Facebook post. The ‘panchavargathara’, the square base, of the mast was found damaged on Sunday afternoon by using some chemical, suspected to be mercury.

The teakwood mast, covered using 9.16 kg of gold, 300 kg of copper and 17 kg of silver, was ceremonially installed by the head priest, Kandararu Rajeevararu after performing purification rituals in the morning. The damage was noticed in the afternoon after the rituals were over, temple sources said. TDB president Prayar Gopalakrishnan said temple guards had apprehended three persons, including an elderly man in this connection after examining CCTV visuals at the shrine.

“The CCTV visuals showed that three persons were seen spraying some liquid at the bottom of panchavargathara. We suspect that the liquid was ‘rasam’ (mercury),” he told reporters. He said the persons were handed over to police and further details would be known only after a detailed probe. Meanwhile, state Devaswom Minister Kadakampally Surendran said the damaging of the panchavargathara using mercury or some other such chemical substance was “mysterious”.

The preliminary assumption of police was that the incident occurred after the afternoon pooja rituals, he said. “We have to find out the motive behind the serious crime. All CCTV visuals at the temple premises are being examined. It will be ensured that the culprits are found out and punished,” the minister added. The 10-day festival at the Sabarimala temple is scheduled to begin on June 28. The shrine will be closed on July 7 after the ‘aarattu’ ritual, which marks the end of the festival.