Goa CM Manohar Parrikar death HIGHLIGHTS: The BJP leader and former defence minister, who spearheaded the party's poll campaign since 1994 in the state, was critical for the past few weeks.

Taking to Twitter, Kovind said, “Extremely sorry to hear of the passing of Shri Manohar Parrikar, Chief Minister of Goa, after an illness was borne with fortitude and dignity. An epitome of integrity and dedication in public life, his service to the people of Goa and of India will not be forgotten.”

The BJP leader, who spearheaded the party’s poll campaign since 1994 in the state, had been ailing for the last one year and has undergone treatment in the US as well as at AIIMS, Delhi, and a private hospital in Mumbai. He was shifted to AIIMS in New Delhi on September 15 last year and returned to Goa on October 14. Since then, he had been recuperating at his private residence at Dona Paula.

A condolence meeting for him will be held in the Union Cabinet at 11 am today.

Follow LIVE: After Manohar Parrikar’s death, BJP has overnight meeting; no consensus on CM yet

"I am deeply saddened to hear the demise of Manohar Parrikar ji. He was an outstanding leader and best known for his administrative acumen. He contributed immensely to the growth of Goa in particular and the country in general," Assam Governor Jagdish Mukhi said in a statement.

Leaders across parties expressed grief over the demise of Goa Chief Minister Manohar Parrikar who, they said, was a dedicated public figure and one who built modern Goa and was loved by Goans.

President Ram Nath Kovind’s condolence message, which was the first official confirmation about his death, described Parrikar as the “epitome of integrity and dedication in public life” while Prime Minister Narendra Modi said he was “an unparalleled leader, a true patriot and exceptional administrator”. READ MORE HERE

The Goa Church has condoled the demise of Manohar Parrikar, claiming that the chief minister sometimes sought its opinion before taking "far-reaching decisions for the benefit of the state".

"He would sometimes seek their opinion before coming out with far-reaching decisions for the benefit of the state," Archbishop of Goa and Daman Fr Filipe Neri Ferrao said in a condolence message.

Goa has lost one of the greatest leaders of the soil. This loss is certainly irreversible and incalculable. Though I had political differences with him, I respected him as an individual as well as a leader of great abilities.I consider myself lucky to have witnessed the entire political career of our beloved ' Bhai ' who rose from a middle class family background to the height of the Defense Minister of India and I respect him a lot for his achievements. He made all of us proud.He proved himself as a true fighter who fought against the dangerous illness of cancer while continuing with the regular service of the state. He will be remembered for all his good deeds and memories he left behind for all of us to get inspiration. May our Lord bless and comfort him and his family during this time of grief. May his departed soul gets eternal peace.

"Manohar Parrikar ji is no more with us, it's not only a loss for BJP but also for the society. From modernization of the forces to the first surgical strikes under PM Modi's leadership, he gave a good account of his administrative qualities," BJP president Amit Shah was quoted as saying by ANI.

The Indian Institute of Technology, Bombay paid tributes to Goa Chief Minister Manohar Parrikar, an alumnus of the institute. Remembering the late leader, the institute said, "Goa Chief Minister Mr. Manohar Parrikar's demise comes as a shock to all of us at IIT Bombay. He was the Institute's Distinguished Alumnus and keenly involved with many initiatives at IIT Bombay. He was also deeply involved with the launch of IIT Goa. He was the Chief Guest for the 55th Convocation of IIT Bombay held on Saturday, August 12, 2017 at 10.00 am at the Institute’s Convocation Hall. The Institute condoles his demise.  The Institute had felicitated its Distinguished Alumnus Mr. Manohar Parrikar, former Minister of Defence, Government of India, who graduated in Metallurgical Engineering from the Institute in 1978, “In recognition of his contribution to the Development of the Country,” on the Alumni Day in 2014."

Parrikar was first IIT grad to be an MLA in India. 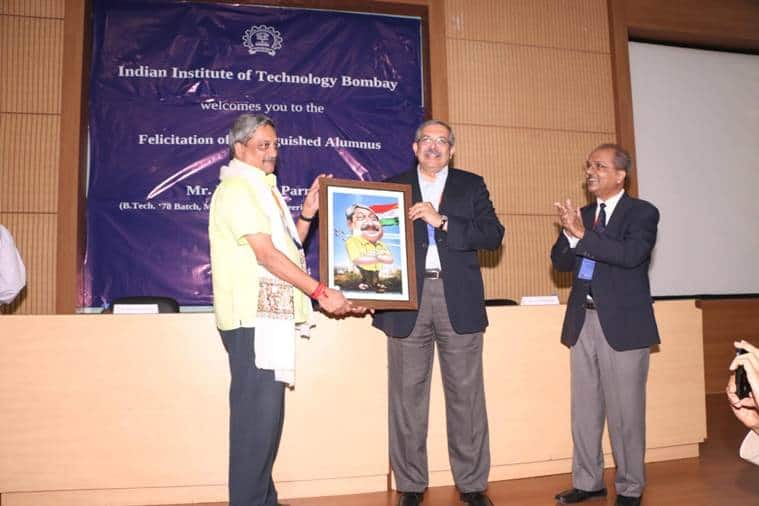 Extremely saddened at the news of passing away of Goa CM Sh Manohar Parrikar ji. A symbol of simplicity in politics who led a humble life is no longer with us. May his family bear the irreparable loss with courage. Prayers with them

Political tributes continue to pour in

Women and Child Development Minister Maneka Gandhi said Parrikar's dedication and simplicity won many hearts and he also contributed immensely towards the development of the nation. Nationalist Congress Party chief Sharad Pawar also expressed grief over the demise of Parrikar. "We have lost an able and industrious administrator who made his mark with his simple demeanour and extraordinary intellect. My sincere condolences to his family members," Pawar tweeted.

My heartfelt condolences on the demise of Shri Manohar Parrikar Ji. A remarkable person who impressed everyone with his simplicity & dedication towards his duties. Generations will remember him & will be inspired by him as he choose the path of integrity & utmost dedication ?????? pic.twitter.com/xVr72aOPnE

Former Jammu and Kashmir chief minister and PDP president Mehbooba Mufti said Manohar Parrikar was a true fighter who worked tirelessly for the welfare of his people with a sense of duty and dignity. Jammu and Kashmir Governor Satya Pal Malik described him as a widely respected public figure and an able administrator.

Parrikar will be remembered as 'one of best defence ministers': Fadnavis

He was a true son of Goa and served India in many roles and responsibilities !
No doubt Shri Manohar Parrikar will be remembered as one of best Defence Ministers of India.
My deepest condolences to his family, friends and people of Goa & India.
Om Shanti pic.twitter.com/WXJ1DQc7oT

I got many opportunities to work and interact with him.
Right from the programs when he was the Raksha Mantri to my recent visit to Hindustan Waste Treatment Pvt Limited plant at Saligao in Goa. His commitment and vision always kept inspiring me!
Now, only memories are left! pic.twitter.com/86FOSKq2wC

Terribly pained and saddened....
With the sudden demise of Goa CM #ManoharParrikar ji, we have lost a humble, simple, trusted, valued and hardworking leader of India. His dedication towards his work was beyond imagination. pic.twitter.com/I6a2AQ4a87

"Extremely saddened at the passing away of a dear friend and colleague, Shri Manohar Parrikar. A wonderful human being, his dedication towards his duty and passion for the welfare of his people will always remain an inspiration for all of us," Union Minister Dharmendra Pradhan tweeted.

He will be deeply missed. Pray to the Almighty to give strength to his near and dear ones in this hour of grief. ? ??????

Odisha Chief Minister Naveen Patnaik also condoled the demise of the Goa CM. "Deeply saddened by the news of the passing away of former Defence Minister of India & Chief Minister, Goa Manohar Parrikar. My thoughts and prayers are with his family, friends and followers. May his soul rest in peace," Patnaik wrote on Twitter.

'Manohar Parrikar lent dignity to every post he occupied'

Former Union minister Yashwant Sinha said, “Parrikar was one of the finest human beings I met in politics. He lent dignity to every post he occupied. My heartfelt condolences. May his soul rest in peace.”

Deeply saddened by the passing of Shri Manohar Parrikar, Chief Minister of Goa and former Defence Minister. The nation will remember him as a loved public figure. My heartfelt condolences to his family. May his soul rest in peace!

Not even cancer can kill a spirit like Manohar Parrikar: Kamal Haasan

Party ideologies apart a good and gentle man will always be it. Not even cancer can kill a spirit like @manoharparrikar . Have had the honour of breaking bread with him. As will the Nation, I too will remember him.

My heartfelt condolences to the family, friends & colleagues of #ManoharParrikar Sahib. His untimely demise has left a void that will be difficult to fill. May his soul rest in peace.

At this hour, may God give strength to Parrikar's family: Chandrababu Naidu

Andhra Pradesh Chief Minister Chandrababu Naidu tweeted, “Deepest condolences over the untimely death of former Defence Minister and Chief Minister of Goa Shri Manohar Parrikar. May his soul rest in peace. May God give strength and support to the bereaved family at this saddest hour.”

Deepest condolences over the untimely death of former Defence Minister and Chief Minister of Goa Shri Manohar Parrikar. May his soul rest in peace. May God give strength and support to the bereaved family at this saddest hour.

Manohar Parrikar was shifted to AIIMS in New Delhi on September 15 last year and returned to Goa on October 14. Since then, he had been recuperating at his private residence at Dona Paula. He was last seen in public at Atal Booth Karyakarta Sammelan earlier in February when BJP chief Amit Shah came to address the party. Since early this year, he had limited his public interactions and only travelled along with the medical staff of Goa Medical College. Parrikar attended the Budget session of Goa Assembly on January 29 and presented the state budget the next day. On the last day of the session on January 31, he was taken for treatment to AIIMS in Delhi and he returned to Goa on February 5.

Born on December 13, 1955, in Goa’s Mapusa, Parrikar completed his schooling from Loyola High Schol and graduated from IIT-Bombay in metallurgical engineering in 1978. After getting married to Medha Parrikar, the couple was blessed with two sons. However, in 2000, his wife died of cancer.