India trails Pak, Bangla; govt says proportion of undernourished based on opinion poll of only 3000 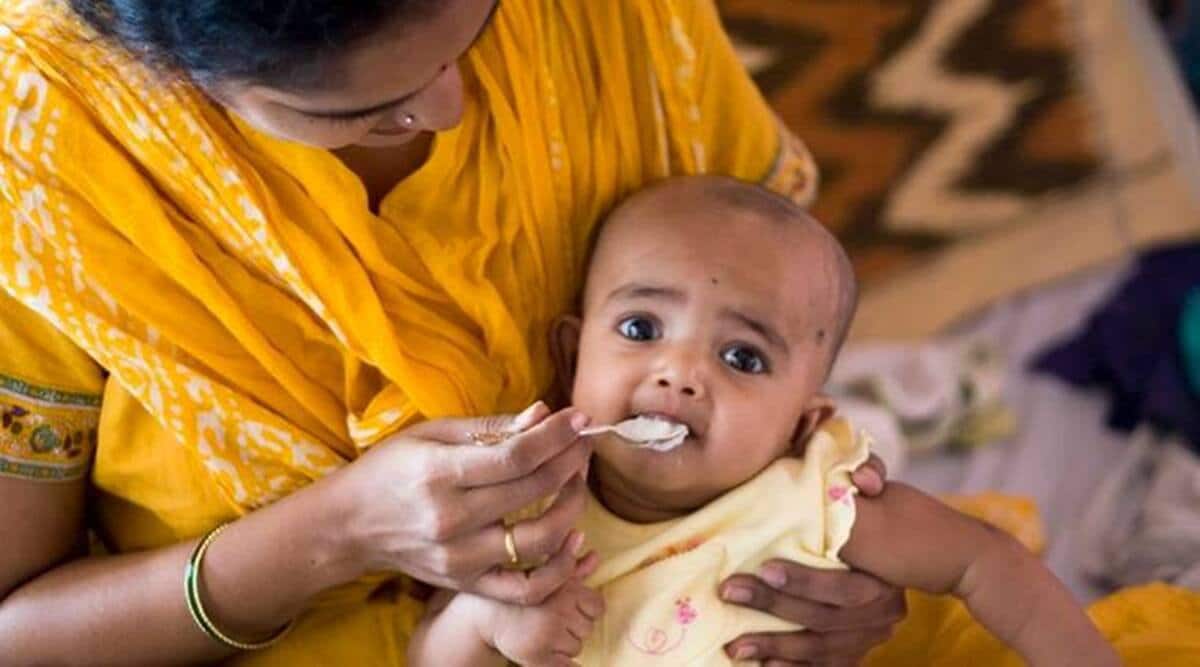 India has been recording decreasing GHI scores over the years. (tigerpuppala_2, CC BY 2.0 via Wikimedia Commons)

India has slipped six places and ranked 107, out of 121 countries, in 2022 Global Hunger Index (GHI), released on Saturday, a report that the Centre called “misinformation”, and part of a “consistent effort’’ to “taint India’s image”.

“Since 2000, India has made substantial progress, but there are still areas of concern, particularly regarding child nutrition,” the report stated. “India’s GHI score has decreased from a score of 38.8 points (in 2000) — considered alarming — to a 2022 GHI score of 29.1, considered serious. India’s proportion of undernourished in the population is considered to be at medium level, and its under-five child mortality rate is considered low.

With a score of 29.1, the GHI finds the level of hunger in India “serious’’. The index says child wasting — or the share of children under 5 years who have low weight for their height, indicating undernourishment — in country is 19.3%, the highest in the world.

Reacting to the report, the Union Ministry of Women and Child Development stated: “A consistent effort is yet again visible to taint India’s image as a nation that does not fulfil the food security and nutritional requirements of its population. Misinformation seems to be the hallmark of annually released Global Hunger Index. The Global Hunger Report 2022 released by Concern Worldwide and Welt Hunger Hilfe, NGOs from Ireland and Germany respectively, has ranked India at 107 among 121 countries…”

Calling the report “disconnected from reality”, the ministry said it chooses to “deliberately ignore efforts made by the government to ensure food security” during the pandemic. It claimed the Centre is running “largest food security programme in the world”. 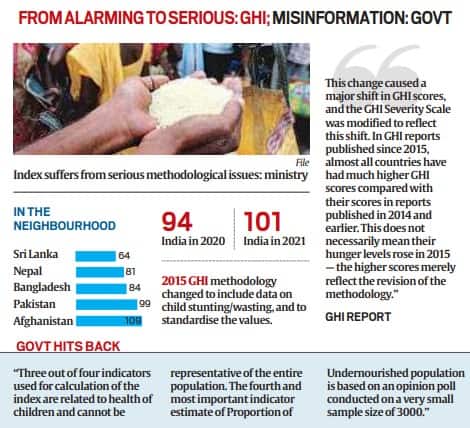 According to the report, barring Afghanistan, India’s neighbours such as Nepal, Bangladesh, Pakistan and Sri Lanka have got higher ranking in GHI.

Incidentally, the GHI methodology was changed in 2015 “to include data on child stunting/wasting, and to standardise the values”, and “since 2015, almost all countries have had much higher GHI scores”, the report mentioned.

The proportion of undernourished in the country has, however, increased since 2014, according to GHI. From 18.4% in 2000 it dropped to 17.5% in 2007 and 14.8% in 2014, to rise to 16.3% in 2022. The report said 17 countries “with 2022 GHI scores of less than 5 are not assigned individual ranks, but rather are collectively ranked 1-17”, as differences between their scores are “minimal”. These are: Belarus, Bosnia & Herzegovina, Chile, China, Croatia, Estonia, Hungary, Kuwait, Latvia, Lithuania, North Macedonia, Romania, Serbia, Slovakia, Montenegro, Turkey, Uruguay.

Explaining why developed countries are not part of the index, the report noted, “Inclusion in the GHI is determined based on prevalence of under-nourishment and child mortality data dating back to 2000. Countries with values above the “very low” threshold for one or both of these indicators are included in GHI. Specifically, countries are included if prevalence of undernourishment was at or above 5.0 percent and/or if the child mortality rate was at or above 1.0 percent for any year since 2000.”