From RBI & govt banks to LIC, Rs 205 crore to PM Cares from salaries

The Prime Minister’s Office, which manages the fund, has declined to furnish details of contributions received, saying that PM CARES is “not a public authority under the...RTI Act”. 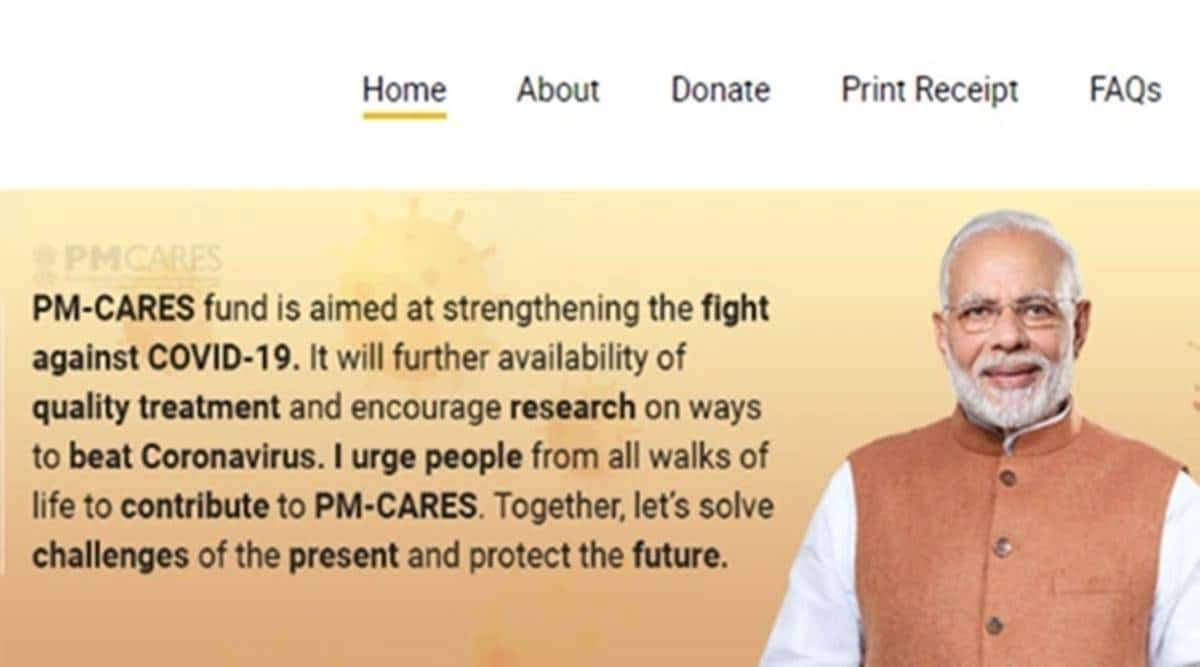 The Prime Minister’s Citizen Assistance and Relief in Emergency Situations (PM-CARES) Fund was set up in view of the Covid-19 pandemic. (Source: pmcares.gov.in)

IT’S NOT just a wide range of central educational institutions, at least seven public sector banks, seven other leading financial institutions and insurers, and the RBI, have together contributed Rs 204.75 crore from their staff salaries to the Prime Minister’s Citizen Assistance and Relief in Emergency Situations (PM CARES) fund, RTI records accessed by The Indian Express show.

This takes the total contribution from the 15 government banks and institutions that responded to RTI queries from The Indian Express to Rs 349.25 crore.

The Prime Minister’s Office, which manages the fund, has declined to furnish details of contributions received, saying that PM CARES is “not a public authority under the…RTI Act”.

Records show that LIC’s contribution of Rs 100 crore was made on March 31 — Rs 5 crore, too, was donated in March but with no date specified in the response.

SBI topped the seven public banks that responded to RTI queries with a contribution of over 107.95 crore — the first tranche of Rs 100 crore was paid on March 31. In its response, SBI, which is the largest banker in the country, stated that its entire contribution was from the salaries of its employees.

The national banking regulator, RBI, stated that its Rs 7.34 crore was from “contribution by employees”.

PM CARES was set up on March 28 this year following the Covid outbreak and had a corpus of Rs 3,076.62 crore by March 31 itself, of which Rs 3,075.85 crore were listed as “voluntary contributions”, according to its official website.

On August 19, The Indian Express had reported that 38 PSUs used their CSR funds to together contribute over Rs 2,105 crore. Five days ago, this newspaper reported that several central educational institutions and regulators contributed Rs 21.81 crore in the form of “voluntary contributions” from salaries of teaching and non-teaching staff, and from students and pensioners.

RTI replies received by The Indian Express from banks and financial institutions detailing their contributions from staff salaries and related benefits show:

* Canara Bank did not provide any detail other than to state that its Rs 15.53 crore was the “total amount contributed”.

The RTI queries were sent in August and the responses were received this month. EXIM Bank, which is wholly owned by the government, did not provide any detail under the RTI request but its annual report for 2019-20 states that it contributed Rs 1 crore to the fund.

Jaswant Singh: The courteous scholar-politician who was often out of sync with his party