"My experience suggests that when the Parliament functions smoothly, we are able to fulfil numerous aspirations of the people of India," Modi added. Prime Minister Narendra Modi addresses the media as he arrives for the first session of 17th Lok Sabha, at Parliament, in New Delhi. (PTI)

Prime Minister Narendra Modi Monday stressed on the importance of an active opposition in a democracy and said they need not bother about their numbers but should actively participate in House proceedings.

“The role of an Opposition and an active Opposition is important in a parliamentary democracy. The Opposition need not bother about their numbers. I hope they speak actively and participate in House proceedings,” Modi said, speaking to reporters outside Parliament complex.

Modi urged Opposition parties to think of the nation when in the House and address issues related to larger interests of the country.

“When we come to Parliament, we should forget Paksh (ruling) and Vipaksh (opposition). We should think about issues with a ‘nishpaksh’ (non-partisan) spirit and work in the larger interest of the nation,” the prime minister said. 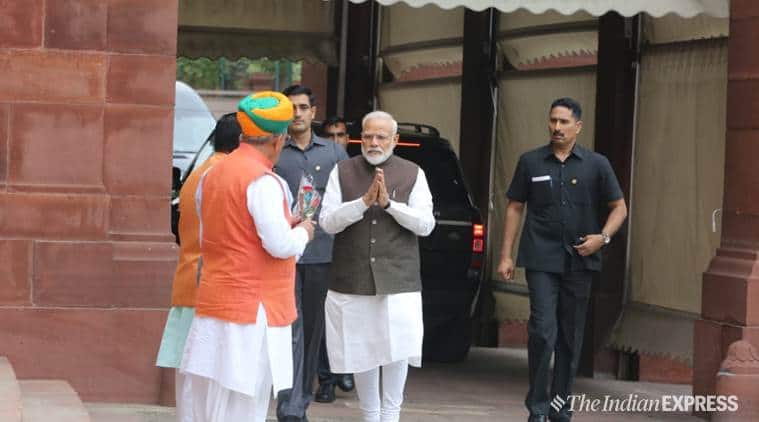 “My experience suggests that when the Parliament functions smoothly, we are able to fulfill numerous aspirations of the people of India,” Modi added.

The prime minister along with the members of Parliament took oath of office. Before the commencement of the session, President Ram Nath Kovind administered oath of office to pro-tem Speaker MP Virendra Kumar, who will oversee the swearing-in of Lok Sabha members.
© IE Online Media Services Pvt Ltd
First published on: 17-06-2019 at 11:33 IST
Next Story