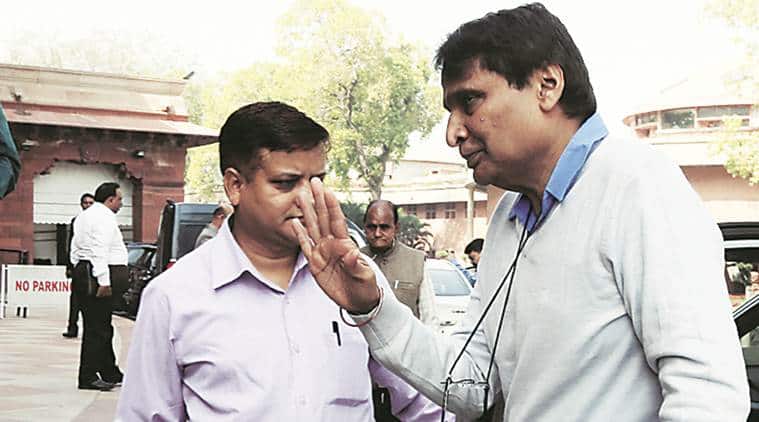 In the backdrop of several railway accidents in the recent past, the government is spending Rs 10,000 crore on track renewal to ensure a safe journey, Railways Minister Suresh Prabhu told Lok Sabha Wednesday. Describing recent accidents as “unfortunate”, Prabhu said, “The cause of those accidents are being investigated by NIA. Whoever plays with the lives of innocent people will not be spared… But track renewal is a priority for us. We are spending Rs 10,000 crore on it.”

Prabhu listed various measures that his ministry had taken for preventing rail accidents and ensuring passengers a safe journey, which he said was one of the top priorities of the government. He said the latest technology is being introduced and the government is working on removing all unmanned level crossings across the country. The minister was replying to the discussion on the demand for grants for the railways ministry, which was later passed by a voice vote.

The minister spoke at length about converting the entire network of rail tracks into broad gauge and installing bio-toilets in all trains as being among the targeted projects of the government. He also informed the House about a proposal to lay separate lines for freight trains and a move to lay at least 10 km track per day. Investment in railways has declined over the years compared to the road sector in India while it has gone up significantly in countries such as China, he said, adding a “clear cut roadmap” has been prepared under which Rs 8.5 lakh crore investment has been planned in the next five years to make the network one of the best in the world.

Prabhu said the government is working on three more dedicated freight corridors to increase the freight capacity of railways. Sixteen per cent of the railway network including the Delhi-Mumbai and Mumbai-Chennai segments takes the load of 65 per cent of the traffic and government has finalised projects to strengthen infrastructure in the high-traffic segment, the minister said. He said a plan is under way to fast track electrification of the railway network, as part of which extensive use of solar energy is being envisaged. A target of saving Rs 41,000 crore on the energy bill in the next 10 years has been set, he said.

To increase speed in high-density routes like Delhi-Mumbai and Delhi-Howrah, railways has set aside Rs 20,000 crore and the contract will be given to a single agency to ensure smooth implementation, the minister said.

Shashank Manohar steps down as ICC chairman, after just eights months in office