Balasubramanian said that the idea of developing a fire retardant fabric first came up during his discussions with Commodore Atul Sinha, a retired officer of the Indian Navy who is now Registrar of DIAT. 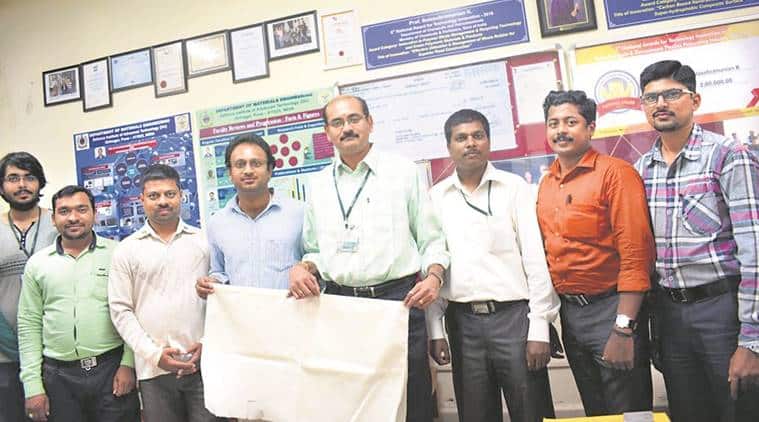 The team from the Defence Institute of Advanced Technology that developed the fabric.

A nano-engineered polymer fabric, which is highly fire-retardant and resistant to hyper-saline solutions, and can also withstand very low temperatures and ultraviolet radiation, has been developed at the Defence Institute of Advanced Technology. The result of three years of research and development, the fabric can have a wide range of applications in the armed forces and space industry.

“The fabrication of the material has been done at nanometre or one billionth of a metre. Also, various additives that impart the properties to the fabric have been infused at the same scale. For this we have used a method called gravure coating method which consists of cylinder and knife structure for fabrication,” said Prof K Balasubramanian, Head of Materials Engineering at the DIAT, who headed the team that developed the fabric, with the support of technical assistants of the department of Materials Engineering, DIAT. The team comprises researchers Ram Dayal, Prakash Gore, Prashant Gupta, Yutika Badhe, Colonel Vijay Kumar and Mamta Dhanshetty. While the polymer fabric in its final form was developed a little over a month ago, a provisional patent has been filed for it.

Balasubramanian said that the idea of developing a fire retardant fabric first came up during his discussions with Commodore Atul Sinha, a retired officer of the Indian Navy who is now Registrar of DIAT.

The final product is the result of several trials, permutations and combinations of the additive substances at the nano scale and rigorous testing for various qualities of the fabric. The primary test results have shown that the fabric maintains its fire retardant property for at least 50 exposures to fire, said the researchers involved in the project.

Balasubramanian said, “There is a rising need of fire-retardant materials having textured surfaces as they have growing industrial and engineering applications. The fabric that we have made possesses an excellent flame retardant property till 50 flame-tests, and still maintains its super-hydrophobic or water repellent nature, owing to synergistic effect. Moreover, it is resistant to hyper-saline solution, UV-irradiation (254 nm wavelength), and also sustains temperature as low as -40 degrees Celsius. A provisional patent had been filed for the technology.”

The scientists involved in the research say that because the fibres of the fabric exhibit excellent integrity even after exposure to high and low temperature as well as chemical attacks, they can have wide use in the army, navy, air force and other security forces. The team has already started working on making the fabric suitable for use in space applications, such as re-entry vehicles.

“When the results were showed to DIAT vice-chancellor Dr Surender Pal, he advised us to take this material to the next stage of development and has agreed to support us through an incubation cell,” added Prof Balasubramanian.

DIAT, a 60-year-old establishment of the Ministry of Defence, is a premier research and development institute that trains scientists of the Defence Research and Development Organisation (DRDO), officers from the armed forces, technical officers of the Ordnance Factory Board, directorate of quality assurance, and Public Sector Undertakings, private industries and civilians. The institute currently runs over 25 specialised courses and seven generic courses in defence technologies. The DIAT got Deemed University status 10 years ago and the Defence Minister serves as its Chancellor.