India now has “no conceptual problem” in procuring oxygen-related equipment and life-saving medicines from China, a source said, adding that on Pakistan, New Delhi has still not made up its mind on whether to accept aid — though it is unlikely to accept it. 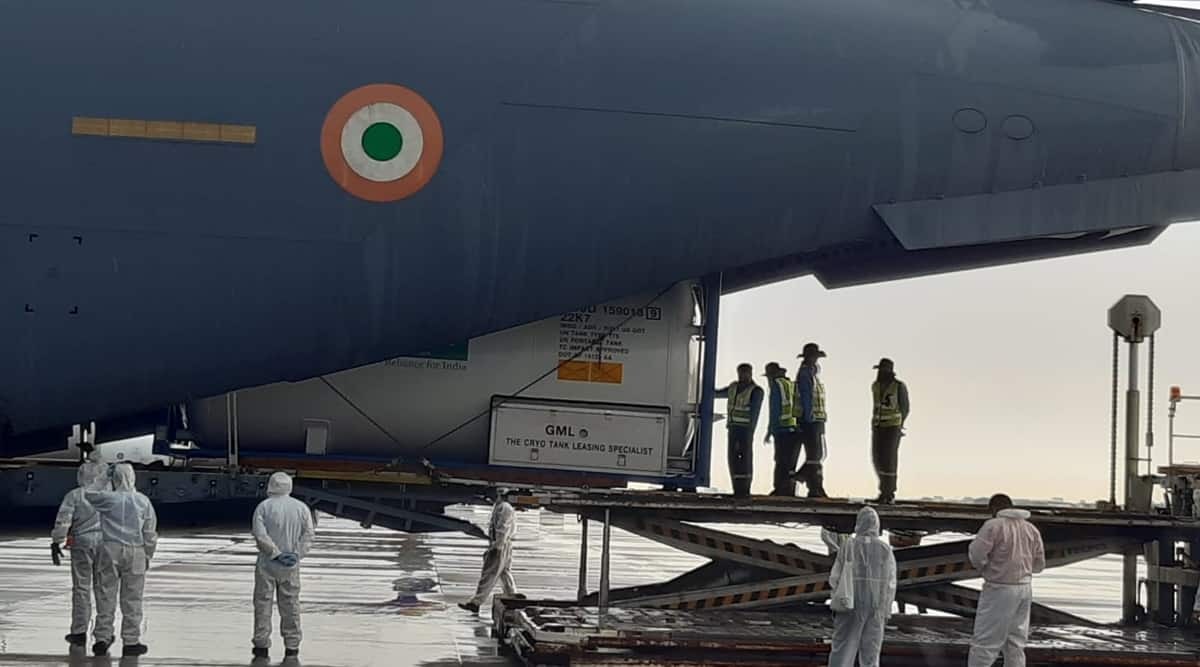 Oxygen containers are airlifted from Bangkok to India. (Twitter/@PIBHomeAffairs)

In what marks a major shift in policy in 16 years, India has now started accepting gifts, donations and aid from foreign nations as the country reels under a massive shortage of oxygen, drugs and related equipment amid a surge in Covid cases.

There have been two other changes in approach that signal this shift. India now has “no conceptual problem” in procuring oxygen-related equipment and life-saving medicines from China, a source said, adding that on Pakistan, New Delhi has still not made up its mind on whether to accept aid — though it is unlikely to accept it. Besides, state governments are also free to procure these life-saving devices and medicines from foreign agencies, and the Central government will not come in the way.

All these three elements add up to a significant change in New Delhi’s strategy, which usually stresses on self-reliance and its own emerging-power image. It’s a marked change from the policy of the last 16 years, since the UPA government under Manmohan Singh decided to not accept aid from foreign sources.

Also Read |From US to Pakistan, help pours in as India fights second Covid-19 wave

It was in the aftermath of the December 2004 tsunami that then PM Manmohan Singh famously said, “We feel that we can cope up with the situation on our own and we will take their help if needed.” It was a “watershed moment” for India’s disaster aid policy.

That set the policy and in the last 16 years, India has refused foreign aid after the Uttarakhand floods in 2013, the Kashmir earthquake in 2005, and Kashmir floods in 2014.

As recently as August 2018, in the aftermath of the Kerala floods, when the state government said the UAE had offered Rs 700 crore as flood relief, the Centre had ruled out any international aid and had made it clear that it would meet the state’s requirements for relief and rehabilitation through “domestic efforts”. This position had led to a major row between the Centre and the state government.

So far, more than 20 countries have come forward to help India — from neighbours to major powers. While Bhutan will supply oxygen, the US is likely to share AstraZeneca vaccines next month.

There was an indication of this shift last year when India decided to accept contributions from abroad, “irrespective of nationalities”, to the newly established PM-CARES fund.

New Delhi, however, doesn’t acknowledge the change in approach, with sources pointing out that these are not donations or aid. They say India has not made an “appeal” for help, and that these are procurement decisions. “If some governments or private entities want to donate as a gift, we accept it with gratitude,” a source said.

The Indian government is asking all foreign governments and agencies to donate to the Indian Red Cross Society, after which an Empowered Group will take a call on how to send them forward, sources said.

Sources also point out that these gifts and donations from foreign governments have been coming as a return of favour for the emergency medical supplies — from hydroxychloroquine to vaccines — that India sent them. India sent about 6.5 crore vaccines to more than 80 countries.

New Delhi’s nuanced change in approach towards procuring emergency supplies from China, especially oxygen-related devices, is significant considering the two countries have been at loggerheads over the border standoff.

In New Delhi, sources said procurement is happening from China, and there is “no conceptual problem”.

Counting the Covid dead in the capital: on paper, at the pyre, and in between