Paul Staniland, Associate Professor of Political Science at University of Chicago, said that the Trump visit is likely to be overshadowed by US domestic politics "including the Democratic primary, the economy, and Trump's ongoing clashes with the Democratic House". 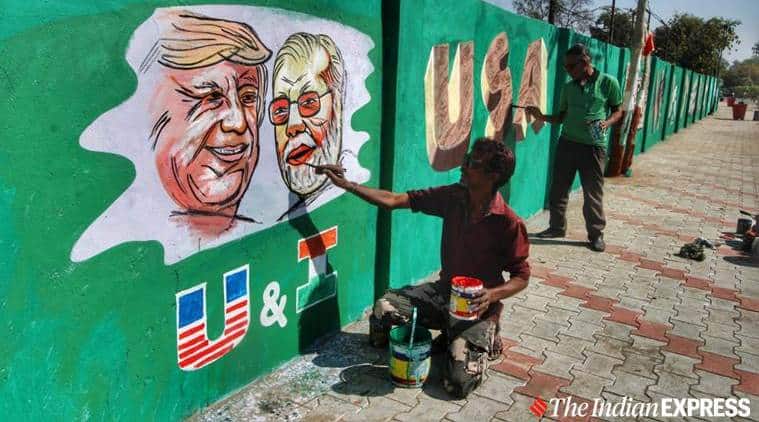 Ahead of US President Donald Trump’s visit, artists at work in Ahmedabad on Tuesday. (Express photo by Javed Raja)

US President Donald Trump’s scheduled visit to India on February 24-25 is expected to be a huge success in public diplomacy and would generate adulatory headlines, but it risks masking deepening disagreements between India and the US and falling short on any substantive achievements or startling breakthroughs. This is the view of the experts who follow the bilateral relationship closely and have handled these issues between the two countries in recent US administrations.

Ashley Tellis, who served as senior adviser to the undersecretary of State for political affairs where he was intimately involved in negotiating the civil nuclear agreement with India, avers that “Trump’s trip will be a huge success in public diplomacy, but it risks masking many deepening disagreements between the US and India on issues other than the strategic. If these are not satisfactorily resolved, the bilateral strategic convergence could be threatened because domestic politics in both countries have reached the point where the strategic partnership cannot be easily sustained on the necessity of balancing China alone.”

“The visit may well generate adulatory headlines for both Modi and Trump. But at a time when there are many outstanding challenges in the relationship, the real test is whether it can be used to motivate both bureaucracies to get anything substantive done,” says Joshua White, who served at the Obama White House as senior advisor and director for South Asian affairs at the National Security Council.

Paul Staniland, Associate Professor of Political Science at University of Chicago doesn’t think that “Trump’s visit will make a major splash here in the US. It will get some attention, but the main areas of political attention are domestic, including the Democratic primary, the economy, and Trump’s ongoing clashes with the Democratic House. As long as Trump avoids an enormous faux pas, it probably won’t get coverage beyond the news cycle.”

Tellis thinks that “the visit will confirm that the strategic convergence between the US and India is deepening despite many challenges. I don’t expect startling breakthroughs on any issues, rather a continuation—even if more dramatically this time—of PM Modi’s long-standing efforts to keep President Trump invested in India. I think the PM’s calculation is that the more Trump sees India as a friend the less likely he is to target India, especially on trade issues where Indian policy is quite problematic.”

Also read | Areas near Taj get facelift but will it be maintained, ask locals

“We know Trump likes to present himself as a dealmaker, so can assume some kind of deal is important to him personally. But the US and India are quite some distance apart on many of the thorns currently stuck in the sides of a larger trade relationship, so the deal from this visit should be considered a helpful step–but negotiators will still need to keep focused on resolving the extensive and complicated tensions,” argues Alyssa Ayres, who served as US deputy assistant secretary of state for South Asia from 2010 to 2013.

“The Trump administration has been needlessly combative with India on trade and investment issues, complicating an already difficult dimension of the bilateral relationship. Even a so-called ‘mini deal’ on trade is likely to be embarrassingly modest,” fears White.

With Robert Lighthizer, the top US trade administrator and negotiator not visiting India along with President Trump, Ayres expects “to see something extremely modest on the trade front result from the trip. All progress is good progress and should be encouraged, but we can’t fool ourselves into thinking this is something bigger than it really is.” 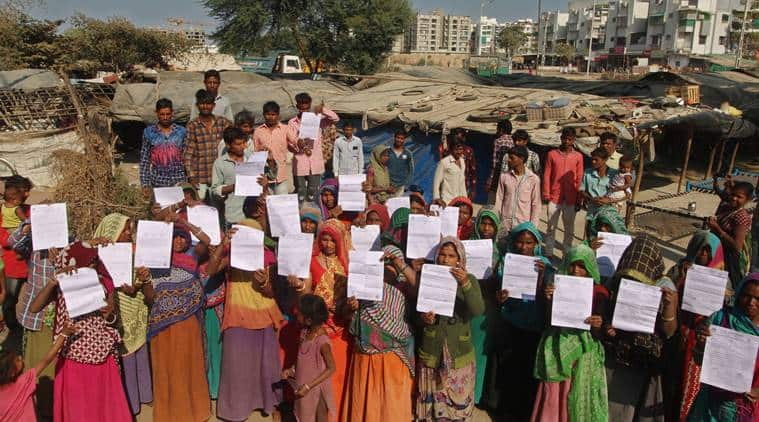 The families claimed they have been asked to vacate due to ‘Namaste Trump’ event. (Express photo by Javed Raja)

“Current negotiations are focused on rolling back some of the bad steps on both sides that have exacerbated already-existing and frankly quite longstanding tensions: scaling back the Trump tariffs on steel and aluminum, over which India retaliated with a raft of tariffs on important US ag exports in particular; lifting or modifying the price caps India put in place on advanced medical devices like heart stents; and it seems the perennial Trump fixation on Harley-Davidsons is driving a possible tariff reduction on >800cc motorcycles,” she says.

“It remains unclear to me whether market access for US dairy products will result, as this issue involves a certification process that is really complicated. We haven’t heard anything at all about investment issues or digital economy for that matter. We’ll have to see how it all shakes out, but yes, a trade deal is viable. It just will likely comprise fixing some irritants, rather than creating a broad opening, which is what people usually think of when they think about a trade deal,” she adds.

President Trump’s visit is happening in the context of a likely cessation of violence agreement between the Taliban and the US, in which Pakistan has played an important role. Trump is not visiting Pakistan in this trip, White says that “The US-Taliban deal is still provisional and fragile, and whether President Trump is invested in making it succeed is anyone’s guess. Recognizing New Delhi’s deep and longstanding concerns about granting any concessions to the Taliban, I suspect that the President won’t try to ‘sell’ the deal to Modi so much as inform him about it, and move on to other topics of mutual interest.”

Tellis, however, feels that “India has already made its peace with Trump’s policies: the gradual withdrawal from Afghanistan is inevitable; US-Pakistan relations won’t go back to the old normal, but perpetual estrangement is unlikely either.” Even on other contentious regional issues, he assesses that “India will stay out of the US squabble with Iran; and if India allows Huawei to build its 5G network, Delhi will have to live with the risks no matter how the US feels about India’s decisions.”

Should Delhi worry about President Trump going off-script on Kashmir or CAA? “The President’s staff have most likely diligently prepared nuanced talking points for him on Article 370, the CAA, and a host of other delicate topics. It will be a great surprise if he actually uses them outside of his scripted remarks. And the Indian government knows full well that the Trump administration has neither the interest nor the credibility to meaningfully criticize the Modi government for its increasingly illiberal politics,” argues White.

Staniland says that “The recent letter from four senators and the growing number of co-sponsors for the Jayapal resolution in the House (now up to 61 co-sponsors) suggest a degree of concern in Congress over the direction of India’s policies, both in Kashmir and towards the CAB. The Trump administration has not shown deep public interest in pursuing these lines of criticism, but they add potential volatility to the relationship at a time when the US is also trying to bolster ties with Pakistan as part of its Afghanistan policy.”

“I don’t think. Republicans will view Trump’s policies on India favorably, Democrats won’t have their minds changed, and so the nothing will radically change,” adds Staniland, “The visit will likely make for some splashy images and headlines, and the defense deals are meaningful, but for obvious reasons it will receive a lot more interest in India than America”.