That’s good news for the economy when agriculture is the only sector expected to grow by 3 per cent amid an overall 6.5 per cent contraction in 2020-21 -- and for the NDA government facing unrelenting protests over its farm reform laws. 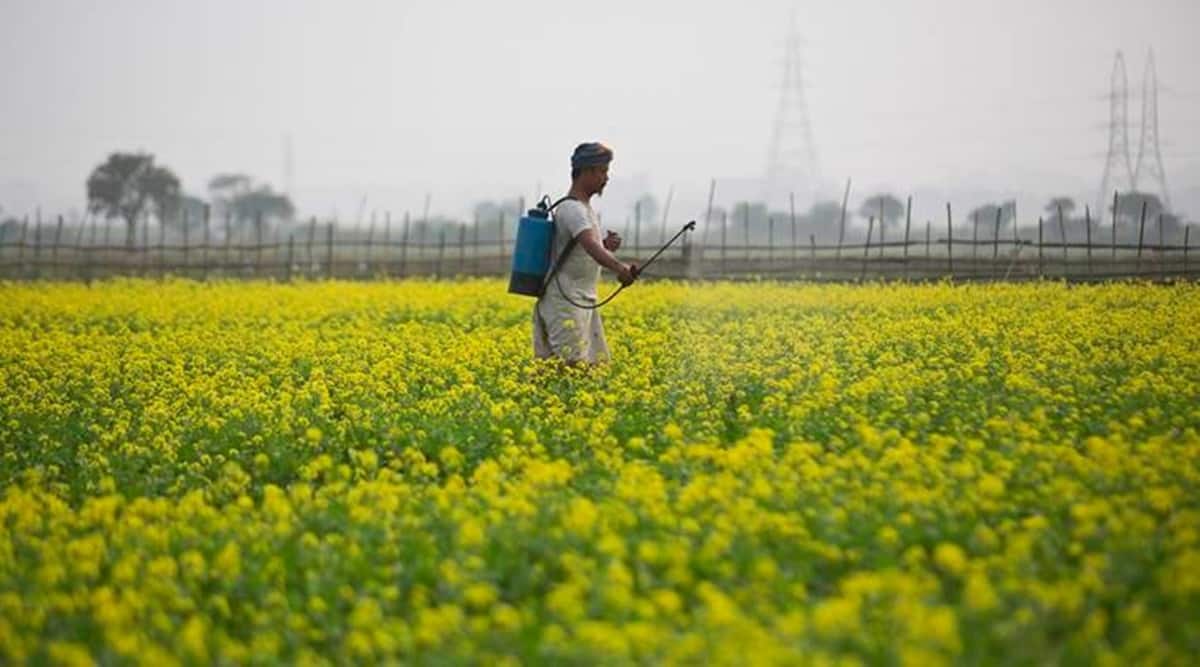 Mustard is mainly produced in southern Haryana apart from some areas of Hisar and Fatehabad.

AFTER MANY years, Indian farmers are benefitting from both bumper production and remunerative prices, even as harvesting and marketing of rabi (winter-spring) crops have taken off. That’s good news for the economy when agriculture is the only sector expected to grow by 3 per cent amid an overall 6.5 per cent contraction in 2020-21 — and for the NDA government facing unrelenting protests over its farm reform laws.

Mustard is quoting at Rs 5,150 per quintal in Rajasthan’s Alwar mandi, which is higher than Rs 3,650 at this time last year and also the government’s minimum support price (MSP) of Rs 4,650.

Roughly a quarter of the crop — including in the main mustard belt of eastern Rajasthan (Alwar, Bharatpur, Dausa, Jaipur, Tonk and Sawai Madhopur), northern Madhya Pradesh (Bhind, Morena, Gwalior, Sheopur and Shivpuri) and southern Haryana (Bhiwani, Mahendragarh and Rewari) — has already been harvested, with the rest to be completed over the next ten days.

“The crop has been good due to favourable weather and no significant incidence of disease (white rust, sclerotinia stem rot and alternaria leaf spot) or pests (aphids),” P K Rai, head of the Directorate of Rapeseed-Mustard Research at Bharatpur, told The Indian Express. The Union Agriculture Ministry has pegged mustard production for 2020-21 at a record 10.43 million tonnes (mt).

Along with output, farmers are also realising above-MSP rates, a combination that has eluded them for a long time. The years 2014-15 and 2015-16 saw low production. The following four years were marked by bumper production, but sub-MSP realisations. This time, they have been helped not only by the surplus monsoon rains that have recharged groundwater tables and timely onset of winter, but also a surge in international prices.

On Monday, prices of crude palm oil in Malaysia and soyabean at the Chicago Board of Trade futures exchange touched 10-year and near-seven-year highs, respectively. High global prices have made edible oil imports dearer, benefiting domestic mustard growers just when their crop is being harvested and brought to the mandis.

“This time, we harvested our masoor during the second half of February and sold it at Rs 5,200-5,300/quintal,” said Rao Gulab Singh Lodhi, a farmer from Nanhegaon village in Narsinghpur district. Chana harvesting will mostly be from middle to end-March. Prices now are at Rs 4,800-4,900/quintal, a shade lower than MSP. Suresh Agarwal, president of the Indore-based All India Dal Mill Association, does not see these going below Rs 4,600-4,700 even after arrivals peak.

The biggest rabi crop — wheat — is due for harvesting from late-March in MP and mid-April in Punjab, Haryana, UP and Bihar. Since the bulk of wheat is procured at MSP by government agencies, the uncertainty for farmers is more with regard to production than prices. And that is especially on account of maximum temperatures hovering 2-5 degrees Celsius above normal.

The wheat crop has entered the grain-filling stage. According to Rajbir Yadav, principal scientist at the Indian Agricultural Research Institute, day temperatures should not cross 36 degrees, as that would induce forced maturity and early ripening at the expense of yields. The Met Department’s latest forecast indicates no major change in maximum temperatures during the next three days, but a likely fall by 2-4 degrees Celsius over Northwest and Central India thereafter, which would be welcome news.

Farmers are also expected to earn good money from seed spices such as jeera (cumin-seed), coriander (dhaniya) and fennel (saunf) that are marketed around this time. Coriander seeds are trading at Rs 6,200 per quintal in Gujarat’s Gondal market, about Rs 500/quintal higher than a year ago. Jeera rates at Unjha in Mehsana district are somewhat lower — at Rs 12,200 against Rs 13,200/quintal — but farmers aren’t complaining.

“My average yield is 8-9 man per bigha (about 9.5 quintals/hectare). This year, it has gone up to 10-11 man (11.7 quintals/hectare), thanks to good weather conditions and no pest or disease attacks,” said Bhikhabhai Bhoraniya from Juna Devaliya village in Morbi district. Jeera and coriander are harvested from the second half of February, while fennel arrivals will start only in April.