As farmers camp at Delhi border, Amit Shah reaches out: move to protest site, will talk

But the Home Minister's move received support from Punjab Chief Minister Amarinder Singh. Welcoming the move, the senior Congress leader urged the farmers to “grab” the offer and even offered to mediate. 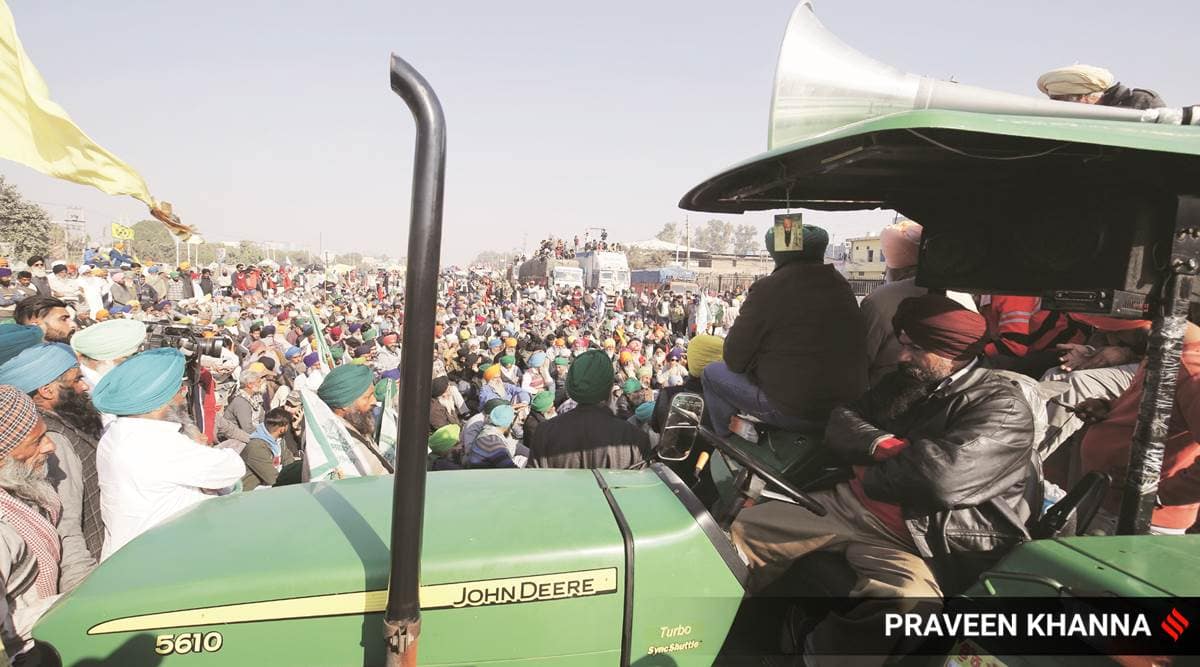 Farmers at the Delhi border, in Singhu, on Saturday. (Express Photo: Praveen Khanna)

With pressure mounting from farmers camped at Delhi’s borders, a key ruling ally in Haryana and Opposition parties, Union Home Minister Amit Shah Saturday signalled a softening of the Centre’s hardline stance by offering to hold talks as soon as the protesters move to a designated site in Burari on the outskirts of the capital.

The offer drew a wary response from the farmers, who are seeking the repeal of newly enacted farm laws and assurances from the Centre on the MSP regime and the mandi system. Joginder Singh Ugrahan, the president of BKU (Ugrahan) who is leading the protests from Punjab, insisted that they wanted to head to Jantar Mantar but said that a decision on Shah’s appeal will be taken Sunday.

But the Home Minister’s move received support from Punjab Chief Minister Amarinder Singh. Welcoming the move, the senior Congress leader urged the farmers to “grab” the offer and even offered to mediate.

“Some farmers’ unions and farmers demand that talks be held soon instead of December 3. So, I assure everyone that as soon as you shift to Burari ground, the Government is ready to hold talks with you the very next day,” Shah said in a statement.

“For the last few days, farmers from Punjab and Haryana and some other parts of the country have come to the border of Delhi. For this reason, farmers have gathered on the two major highways connecting Punjab, near the border of Delhi since yesterday,” he said.

“Farmers are also facing many problems due to heavy cold, as well as commuters are also facing problems. Therefore, I humbly appeal to the farmer brothers that the government has made a proper arrangement for you in Burari, where you can hold protests,” the Home Minister said.

“The Government has made arrangements for water, toilets and medical care, so that farmers do not face any inconvenience. You will also be given police permission to protest in a democratic and peaceful manner on this ground,” Shah said.

The Home Minister also spoke to a few farmers’ leaders, including Joginder Singh Ugrahan. “He urged us to not seal the borders of Delhi and instead go to Burari. We understand that blocking borders is causing inconvenience to people, but we are not ready to move to Burari. The Home Minister should allow us to protest at Jantar Mantar, which is where everyone lodges their protest… why can’t we do the same?” Singh told The Indian Express.

Farmers at the protest site at Burari, in New Delhi on Saturday. (Express photo by Praveen Khanna)

Swaraj India founder, Yogendra Yadav, who is part of the seven-member Samyukt Kisan Morcha, the umbrella body of over three dozen farmer organisations, said: “All the organisations coming in from Punjab shall be holding a meeting…Subsequently, the Samyukt Kisan Morcha shall hold another meeting and take a final call. We shall announce our decision Sunday morning.”

Shah’s offer came after the JJP, which is BJP’s key ally in Haryana, urged the Centre to hold talks immediately instead of waiting till December 3. “…the talks should be held today itself by calling all the farmer organisations and their doubts should be cleared. And all the problems of the farmers should be resolved,” said Digvijay Chautala, younger brother of Deputy Chief Minister Dushyant Chautala.

“The episode we saw during the past two days through TV channels has caused hurt in the heart of almost every citizen of Hindustan,” he said.

In a statement, Amarinder Singh said: “Only by sitting across the table can both sides come to a solution to the problem. Farmers had already won half the battle by bringing the Union Government to the negotiating table without further delay…I and my government are prepared to extend our full support to these negotiations, and are willing to mediate in the collective interest of all.”

Through Saturday, the farmers stayed put at Delhi’s borders despite police granting permission to move their protest to Burari’s Nirankari ground. Apart from the Singhu and Tikri border points, where farmers from Punjab have gathered, protesters arrived at the Ghazipur border with UP in the afternoon.

Advertisement
Farmers shout slogans after burning an effigy during a protest against the newly passed farm bills at Singhu border near Delhi, on Saturday. (Reuters)

In his statement, Shah said that detailed discussions on farmers’ problems were held on November 13. “I appeal to the farmers that a delegation of farmers has been invited by the Government for detailed talks on your problems on December 3 in Delhi,” he said.

Union Agriculture Minister Narendra Singh Tomar also reiterated that the Government is ready to hold talks. Expressing hope that farmers’ representatives will join the discussion on December 3, he said that a way will be found through the dialogue.

Meanwhile, eight Opposition parties issued a joint statement that called on the Centre to address the “concerns” of the protesting farmers. However, the main Opposition Congress was not among the eight. Apart from NCP chief Sharad Pawar, DMK’s T R Baalu, CPM general secretary Sitaram Yechury and CPI’s D Raja, they included leaders of RJD, CPI (ML), RSP and Forward Bloc.

With Manoj CG in New Delhi