Express ADDA Highlights: Our concerns were not met, says FM Sitharaman on RCEP

At Express Adda today, Sitharaman spoke on the series of growth measures announced by the government over the last three months and the impact on the growth of the country.

A day after India said it won’t join the Regional Comprehensive Economic Partnership (RCEP), the 16-nation trade agreement, Finance Minister Nirmala Sitharaman said that “many of our core concerns were not met… we haven’t got what we wanted”. The finance minister, who is addressing a gathering at the Express Adda in Mumbai today, added: “We’d love to continue and have our concerns addressed. I’m satisfied that partner countries said they’ll address our concerns. We’re not shutting our doors or looking inwards.. we are actively engaging with global trading communities.”

India on Monday said it will not join the trade agreement since it “does not reflect its original intent” and the outcome is “neither fair nor balanced”.

When asked if the dwindling state of economy played a role in BJP’s low performance in Haryana and Maharashtra, Sitharaman said, “It’s not possible for whichever government, in centre or state, to not talk about the economy at all & ask for votes. The economy is a matter, but voter sees there is a genuine attempt to build economy.”

Sitharaman was in conversation with The Indian Express’s Executive Editor-National Affairs P Vaidyanathan Iyer and National Opinion Editor Vandita Mishra. Express Adda is a series of informal interactions organised by The Indian Express Group and features those at the centre of change.

" Economy is a challenge but voter sees the effort being put in.. very patronising to think voter doesn’t care about digitisation."

Listening to Finance Minister @nsitharaman as she engages in conversation with @iyervaidy and @VanditaMishraIE pic.twitter.com/2Snujxr2DS

Job positions will not be filled if clauses like reservation for locals are put: Sitharaman

Speaking on job reservation on locals, Sitharaman said, " You’re not going to be able to fill positions if you put up such a clause (job reservation for locals). You can’t stop work... will make it difficult."

We are open to more banks coming in from the corporate sector: Nirmala Sitharaman

Thre Finance Minister concluded her talk with demanding for more banks coming in from the corporate sector.

That’s a wrap from us! Hope you enjoyed the session. We will be back soon! pic.twitter.com/sQ8JhkhXdr

We are looking at electric vehicles and public transport as a measure: Sitharaman on pollution in Delhi

Sitharaman on rising pollution level: " Whether cars alone or other factors are adding to pollution we need to see. PM advisor and principal secretary are both looking at pollution issues. We are looking at electric vehicles and public transport as a measure."

Govt is working to improve its growth rate: Sitharaman on GDP at 5%

Speaking on the economic slowdown and GDP at 5 per cent, Finance Minister Nirmala Sitharaman said the government is working on improving the growth rate. " In real estate, we have started working on, soon we will have answers to home buyers. Soon we will come at a stage to offer some solutions to them," she said.

"Government is also looking at EVs and strengthening and encouraging public transportation," she added.

I am not a socialist, I am market reformer: Sitharaman

I am not a socialist and Idea to tax the super-rich didn't come from there: Sitharaman says she's a market reformer. "Very consistent with being a free-thinker," Sitharaman adds on how she identifies herself.

We criticised MNREGA because it didn't create assets: Sitharaman

Secondly, "we criticised MNREGA because it didn’t create assets. We made sure there were no spurious middle-men/agents coming in. There’s value addition so it’s not the same MNREGA," said Sitharaman

NITI Aayog is a think tank, it takes up issues faced by the government based on which policies are created. NITI Aayog has not replaced the planning commission.

Will bring amendments to meet requirements of banking law: Sitharaman on PMC

On PMC bank issue, Finance Minister Nirmala Sitharaman said, "We have had more than 3 meetings to address how to address depositors." To ensure their money is safe, to look at the cooperative organisation on how they can do a banking role, "we will bring in amendments so when you call yourself a bank you have to meet requirements of the banking law."

If digitisation takes away jobs, it also creates a new job and that is why today many of the industries today are recalibrating themselves and it will surely help India grow

India's economy has its own signature: Sitharaman

India is unique in several ways and its economy has its own signature. You really cannot undermine the role of smaller-scale industries in our country. India has a large domestic market and hence it is difficult to compare it with other companies.

Economy is an issue during every election: Sitharaman

The economy is an issue during every election. Each and every voter is concerned about economy and voter voters for a change and sees an attempt being made by the government to improve the economy.

We may have missed the bus last time but we won’t miss the bus now: Sitharaman on deciding on reforms

Finance Minister Nirmala Sitharaman on the Modi govt getting a huge mandate and deciding on reforms: " We may have missed the bus last time but we won’t miss the bus now."

We’re not shutting our doors or looking inwards.. we are actively engaging with global trading communities: Sitharaman

Speaking at the Express Adda today, Finance Minister Nirmala Sitharaman spoke on India's decision to withdraw from RCEP. She said, " many of our core concerns were not met... we haven’t got what we wanted. We’d love to continue and have our concerns addressed. I’m satisfied that partner countries said they’ll address our concerns,"

" We’re not shutting our doors or looking inwards.. we are actively engaging with global trading communities," she added 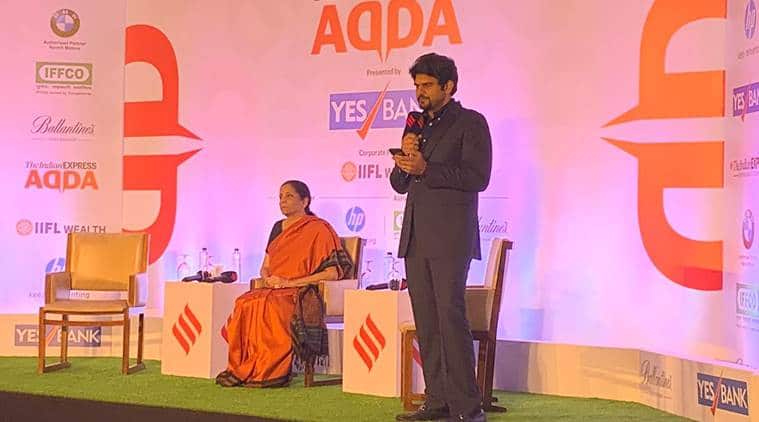 We expect FM Sitharaman to speak about how she proposes to revive the Indian economy: Suresh Shetty

Suresh Shetty, former Maharashtra Health minister says:  " The whole country is undergoing financial crisis and in this Adda we expect the Finance Minister of India to speak about her plans and how she proposes to revive the Indian economy."

Suresh Shetty, former Maharashtra Health minister on what he expects @nsitharaman to say at the #ExpressAdda pic.twitter.com/Itv1W47Fwo

Sitharaman to give insight on various economic policies at a time when the country is going through a financial crisis.

Amid a series of growth measures announced by the government over the last three months, Sitharaman unveiled the biggest corporate tax reform in India’s recent history by cutting the tax rate for domestic companies to 22 per cent, excluding surcharge and cess, and new domestic manufacturing companies to 15 per cent. The move has made India one of the most competitive countries in the region from a taxation standpoint. Born in Madurai in a middle-class family, Sitharaman completed her Masters in Economics from JNU. Her mother-in-law was a Congress MLA and her father-in-law a minister in the Congress government in Andhra Pradesh in the 1970s. Sitharaman joined the BJP in 2008 and became the party’s national spokesperson in 2010.

During the first five-year term of the Narendra Modi government, she served as Union Minister with independent charge for Corporate Affairs and Minister of State for Finance before she was elevated to the post of Defence Minister. In the present government, Sitharaman heads the Union Finance and Corporate Affairs ministries.