The minister’s 18-point directive, issued after a detailed review meeting that was also attended by the environment secretary and director general (forest), called for a solution-oriented and not problem-creating approach. 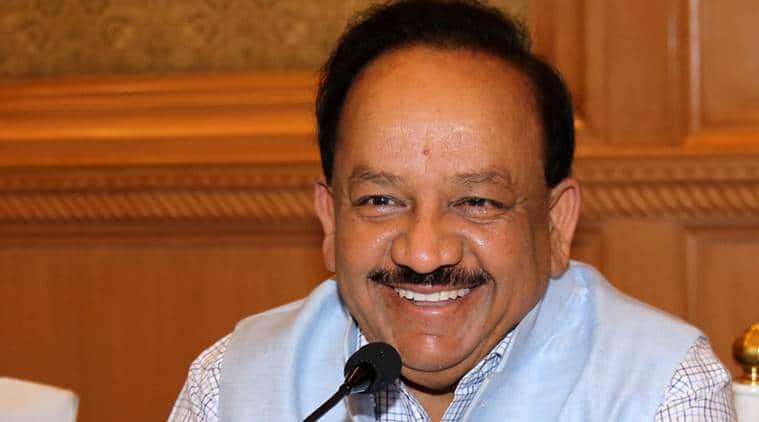 Also in charge of the Science and Technology ministry, Harsh Vardhan retained the Environment portfolio in the Cabinet reshuffle on September 3 (Photo: PTI)

Environment Minister Harsh Vardhan last month wrote to top officials of his ministry to clear projects “on war footing basis” and set a strict time-line. The ministry’s impact assessment (IA) division, however, has already missed the first deadline on September 1.

The two-page directive — titled ‘From the desk of the Minister’ and marked to five key secretaries in the ministry — issued on August 5 was Harsh Vardhan’s first major intervention to fast-track project clearance since he took charge of the ministry on May 22 after the death of his predecessor, Anil Dave.

Also in charge of the Science and Technology ministry, Harsh Vardhan retained the Environment portfolio in the Cabinet reshuffle on September 3.

The minister’s 18-point directive, issued after a detailed review meeting that was also attended by the environment secretary and director general (forest), called for a solution-oriented and not problem-creating approach. These include:

* Decide all pending 340 TOR (Term of Reference — the first stage of environmental clearance) cases as of August 5 by September 1.

*Decide all 598 pending EC (environmental clearance) cases at the earliest on war-footing and finalise pendency of all cases received before August 5 by September 26.

*Additional/joint secretaries will take meetings with all members of all Environment Appraisal Committees (EACs) to ensure that the “tendency of raising new queries again and again is changed”.

*Inform project proponents about the outcome of EAC meeting immediately after their case is heard so that there is no surprise to them when they receive the minutes.

* Once a file is approved, joint secretaries must ensure that a clearance letter is issued immediately “without any delay of even one day”.

* Review pendency at the joint/additional secretary level and submit weekly reports to the PS of the minister “without fail”.

*Drop old cases where information is not furnished from the pendency list after issuing reminders.
n Ensure very high level of transparency.

*Provide latest computers and scanners to the IA division, and tablets with data card facility to EAC members to enable them to scrutinise the cases well in advance.

* On e-governance, implement suggestions given in the last three months immediately and take action against those responsible for delay.

While ministry officials refused to share details of the progress made in cutting pendency, a cursory review of the minutes of EAC meetings show that around 200 cases of TOR and EC were processed at different EAC meetings between August 9 and August 31. Of these, at least 136 have been cleared and only one — an application for exemption from public hearing — rejected. In contrast, the EACs processed around 230 cases in July, clearing 165 and rejecting at least six.

Two EAC members confirmed that they have been asked to speed up the assessment process. “There are not too many new applications in the key sectors where we mostly have cases of extensions and revisions. Even otherwise, the number of pending cases are down. But it is not be possible to achieve zero pendency overnight as we need additional information to decide certain cases,” one of them said on condition of anonymity.