Elsewhere it is part of ‘Gupkar Gang’ but in Kargil, National Conference is BJP’s ally

NC president Farooq Abdullah is chairperson of the PAGD. Of the 26 elected members of the LAHDCK, 10 are from the NC, eight from the Congress and three from the BJP; there are five Independents. The Ladakh Union Territory administration nominates four members to the 30-member LAHDCK. 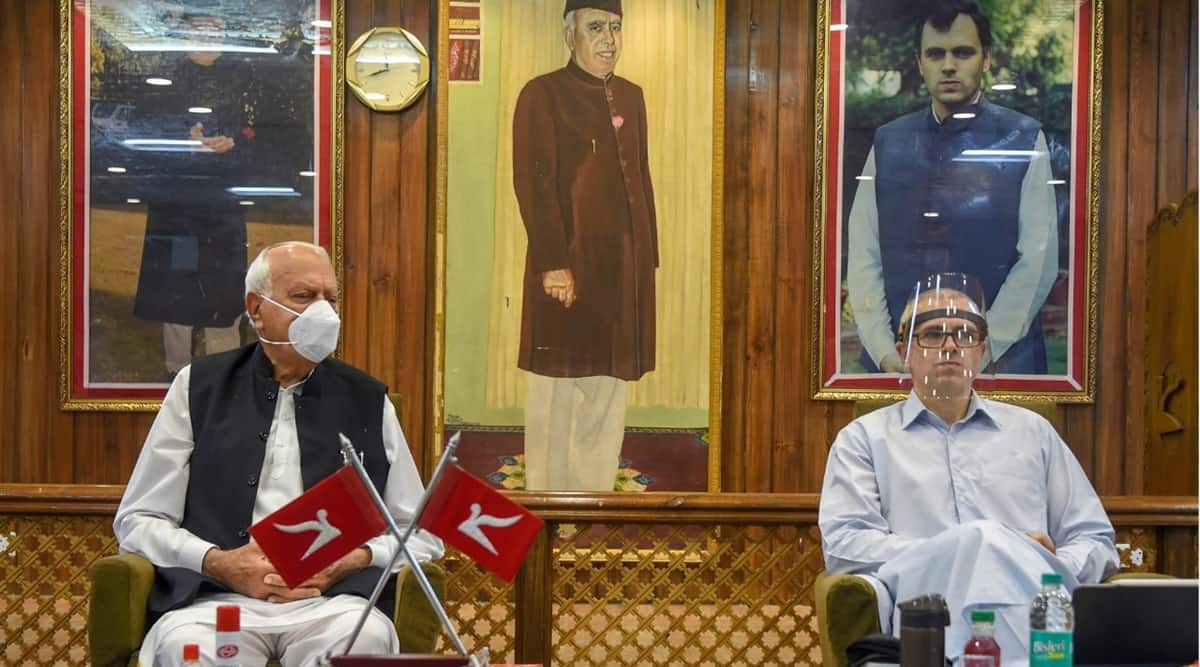 The BJP has declared the People’s Alliance for Gupkar Declaration (PAGD) as a “gang” that wants “foreign forces to intervene in Jammu and Kashmir”, but it is sharing power with the National Conference (NC), one of the main parties of the alliance, in the Ladakh Autonomous Hill Development Council, Kargil (LAHDCK).

NC president Farooq Abdullah is chairperson of the PAGD. Of the 26 elected members of the LAHDCK, 10 are from the NC, eight from the Congress and three from the BJP; there are five Independents. The Ladakh Union Territory administration nominates four members to the 30-member LAHDCK.

Headed by the NC’s Feroz Khan as Chairman/Chief Executive Councillor, the Hill Council has BJP’s Mohammad Ali Chandan as one of the four other Executive Councillors, with the portfolios of Health, Revenue, Agriculture, Forests, Wildlife, Industrial Training Institute, and Soil Conservation.

The NC and BJP had contested the Kargil Hill Council elections in 2018 on their own, said the BJP’s Executive Councillor, who represents the Shargole constituency.

Editorial | Diatribe and distrust: If Home Minister has to resort to same old rhetoric against J&K’s mainstream leaders, what’s been achieved over past year?

The PAGD was formally constituted last month as a platform of seven regional parties that seeks restoration of the special status of Jammu and Kashmir as it existed before the constitutional changes of August 5, 2019. Parties in the PAGD have announced they will contest the November 28-December 19 District Development Council (DDC) elections in the Union Territory of Jammu and Kashmir together.

On Tuesday, Home Minister Amit Shah attacked the alliance in a series of tweets: “The Gupkar Gang is going global! They want foreign forces to intervene in Jammu and Kashmir. The Gupkar Gang also insults India’s Tricolour. Do Sonia Ji and Rahul Ji support such moves of the Gupkar Gang?… Congress and the Gupkar Gang want to take J&K back to the era of terror and turmoil.”

A day earlier, Law Minister Ravi Shankar Prasad had said at a press conference: “Farooq Abdullah has no compunction in seeking the support of China for the restoration of Article 370… Mehbooba Mufti said she won’t hoist the Tricolour unless the J&K flag is restored… Does Congress support the statements of Farooq Abdullah and Mehbooba Mufti? Congress should tell if they are with the stated objective of the Gupkar Declaration.”

Also read | With Gupkar alliance and out of it: how Congress pushed to wall

Asked about the BJP sharing power with the NC in the LAHDCK, the BJP’s MP from Ladakh and president of the party’s Ladakh unit, Jamyang Tsering Namgyal, said the BJP was “openly” in the alliance with the NC, and that it would continue to be that way. “BJP coalition mein hai. Khul ke hai, aagey bhi full-fledged rahengey (BJP is in coalition [with NC in Kargil hill council]. We are in it openly, and will be a full-fledged part of it in future as well). Hum alliance mein hain to hain (That’s the way it is),’’ he said.

The “Kashmir NC” has nothing to do with that party’s unit in Kargil, Namgyal said. “In the next Council elections, the Kargil NC will also come to BJP. No other party will exist here,” he said. J&K, the MP said, is a separate UT from Ladakh. “There (in J&K) they want to make J&K a state [again] and get back Article 370, but it is not the case here. Ladakh is against Article 370.’’

Chief Executive Councillor of LAHDCK Feroz Khan, however, said the NC in Kargil was a unit of the party headed by Farooq Abdullah. “Although Ladakh has become a separate UT, our parent organisation remains the same, and Farooq Abdullah is our leader,’’ he said.

The 2018 elections to the Kargil Hill Council had produced a hung verdict. The NC initially had an alliance with the Congress; the PDP had two councillors and the BJP had one. After the 2019 Lok Sabha polls, the NC and Congress fell out, and the NC entered into a coalition with two PDP councillors and four Independents to continue in power in the Hill Council. A few months later, both PDP councillors joined the BJP, creating the NC’s alliance with the saffron party.