The Election Commission Saturday announced dates for the assembly elections in Madhya Pradesh, Chhattisgarh, Rajasthan, Mizoram and Telangana. With the announcement of the poll dates by the ECI, the Model Code of Conduct has come into force with immediate effect.

Counting of votes in all five states will be held on December 11, 2018, Chief Election Commissioner (CEC) O P Rawat announced in the press conference.

The Election Commission has said that the people of Rajasthan will vote on December 7 and the results will be out on December 11, 2018.

Madhya Pradesh will go to polls on November 28 and the counting of votes will be done on December 11, the EC has announced.

In the last assembly elections in Madhya Pradesh, the BJP had won 166 seats in the House and elected Shivraj Singh Chouhan as CM.

ECI on resignation of Andhra MPs

Andhra MPs resignations were accepted on June 4. Lok Sabha term expires on June 3; less than 1 year was left. Since there was less than 1 year left for vacancy no by-elections in Andhra Pradesh: CEC OP Rawat on by-polls in #AndhraPradesh after resignations of five YSRCP MPs. pic.twitter.com/CIWGT2efwH

Tight schedule for assembly polls.
Except for Chhattisgarh other states will have elections in single phase.
Chhattisgarh: 12th & 20th Nov
MP & Mizoram: 28th Nov
Rajasthan & Telangana: 7th Dec
Counting and results for all states to be announced on 11th December. @IndianExpress

Counting of votes on December 18

Counting of votes in all five states will be held on December 11, 2018, the Election Commission announced in a press conference. By-polls in Shimoga, Bellary and Mandya in Karnataka to be held on November 03.

Election in MP and Mizoram on November 28

Madhya Pradesh and Mizoram assembly elections to be held on 28th November. In Rajasthan and Telangana the elections will be held on December 7 in a single phase.

Monsoon withdrawal remains slow, no further progress expected over next f...
Good news for Amrapali home buyers, over 11K flats to be given possession...
Video of woman offering namaz in hospital: Prayagraj Police says no crime...
Your Daily Wrap: Uddhav camp gets big win in court for Dussehra rally, In...
Uttarakhand ex-minister’s son held for killing 19-yr-old
More from India >>
Chhattisgarh election to be held in two phases on November 12, 20

Code of conduct to come into effect immediately

Model code of conduct to come into force in Madhya Pradesh, Rajasthan, Chhattisgarh and Mizoram with immediate effect.

Polls to be held before December 15, as assemblies come to an end by mid January 2019

Simultaneous elections will be held in Madhya Pradesh, Rajasthan, Chhattisgarh and Mizoram, before 15th December: CEC OP Rawat in Delhi

Latest Mark III EVM to be used in the assembly elections: ECI

ECI says voter assistance kiosk to be set up at all booths during the assembly elections in all the states. With regard to EVM and VVPAT, the ECI chairman said that all the machines being used are latest Mark III and have been produced at BEL. Mock polls will be conducted before the start of polls.

Legislative assemblies in the five states end by January 2019

ECI chairman apologises for changing the time of press conference, clarifies compulsion that led to it

ECI chairman clarifies that certain compulsion forced the commission to change the timing of the press conference to announce the election dates earlier in the day. The chairman declines to make any comment on Congress allegations against the Commission.

Meanwhile, Samajwadi Party chief Akhilesh Yadav said it has "waited too long" for the Congress and will now "consult" the BSP and the Gondwana Gantantra Party for an alliance in the Madhya Pradesh polls. The move comes days after BSP president Mayawati parted ways with the Congress, alleging that the Rahul Gandhi-led party was adopting a stubborn attitude and it was out to finish her party.

Poll schedule may be announced for Telangana

The commission is likely to announce the poll schedule for Telangana as well. The KCR-led government in the state had dissolved the assembly nine months before the end of its term. The election code of conduct comes into play with immediate effect in these states.

After the Congress alleged that the Election Commission's press conference today was delayed due to Prime Minister Narendra Modi's rally, former Union minister Yashwant Sinha has claimed the same. "Unfortunate that Election Commission postponed announcement of election dates in 5 states only to enable Modi to address his public meeting in Ajmer, Rajasthan. Very sad," he tweeted.

Unfortunate that Election Commission postponed announcement of election dates in 5 states only to enable Modi to address his public meeting in Ajmer, Rajasthan. Very sad.

Congress has been in power for almost a decade in Mizoram

The Congress has been in power in Mizoram since 2008. In 2013, it had won the Assembly election after securing 34 seats in the 40-member House. Lal Thanhawala was elected Chief Minister of the state.

Here's an advertisement in The Indian Express today by the Election Commision on VVPAT machines — an independent printer system attached with the EVM that allows voters to verify that their votes are cast as intended. Since 2000, the EC has used EVMs in state Assembly elections and the Lok Sabha polls. 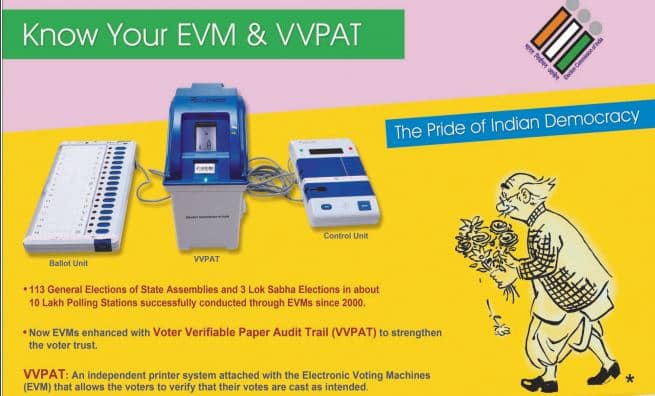 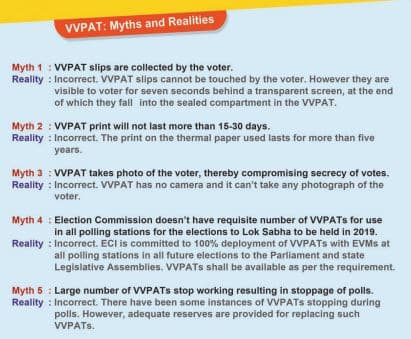 The Election Commission may announce dates for the Telangana Assembly elections as well. Chief Minister K Chandrasekhar Rao recently dissolved the House to avoid a possible clubbing of Assembly polls with the Lok Sabha elections. KCR's Telangana Rashtriya Samiti (TRS) won 82 seats in the 120 member House. It was the first elected government in the state after bifurcation. Read more here.

Madhya Pradesh, Rajasthan, Chhattisgarh, Mizoram and Telangana election dates announcement LIVE UPDATES: The Model Code of Conduct kicks in when the announcement is made.

The Election Commission will announce dates for the Assembly elections to five states today — Rajasthan, Chhattisgarh, Madhya Pradesh, Mizoram and Telangana. The tenures of four states, excluding Telangana, end by January 2019. The Telangana House was recently dissolved, warranting early elections in the state.

The Congres has been in power in Mizoram since 2008. It won the 2013 Assembly election after securing 34 seats in the 40-member House. Lal Thanhawala was elected CM of the state.