Echo from the hills of Chhattisgarh: ‘We are the first Bastariya Battalion’

Monday was the day, battalion 241, called the “Bastariya Warriors” came into being, with 534 personnel. Each of the 534, including 189 women, were recruited for the first time from deep within the jungles of Bastar. On the dais, receiving the salute, were not just the Director General of the paramilitary force but Union Home Minister Rajnath Singh and Chhattisgarh Chief Minister Raman Singh. (Source: Twitter/@rajnathsingh)

At the CRPF’s Anti Naxal Training School atop a hill in north Chhattisgarh, the young recruits marched in all their glory. Under two shamianas on either side, sat their parents and family, clapping as they went past. On the dais, receiving the salute, were not just the Director General of the paramilitary force but Union Home Minister Rajnath Singh and Chhattisgarh Chief Minister Raman Singh.

As passing-out parades go, this was unlike any other. Monday was the day, battalion 241, called the “Bastariya Warriors” came into being, with 534 personnel. The word “Bastariya” stands not only for where they will operate over the next few months, but also where they come from. And each of the 534, including 189 women, were recruited for the first time from deep within the jungles of Bastar.

With the process of the formation of the Bastariya Battalion beginning early last year with physical tests and written examinations, all 534 recruits underwent training at the anti Naxal school. CRPF officials said that over this time, they were trained in “drills, physical and unarmed combat training, the handling of weapons like the INSAS, LMG, UBGL’s and other weaponry, as well as jungle training which included living of the land, survival, casualty evacuation, and Jungle Warfare exercises and tactics.” 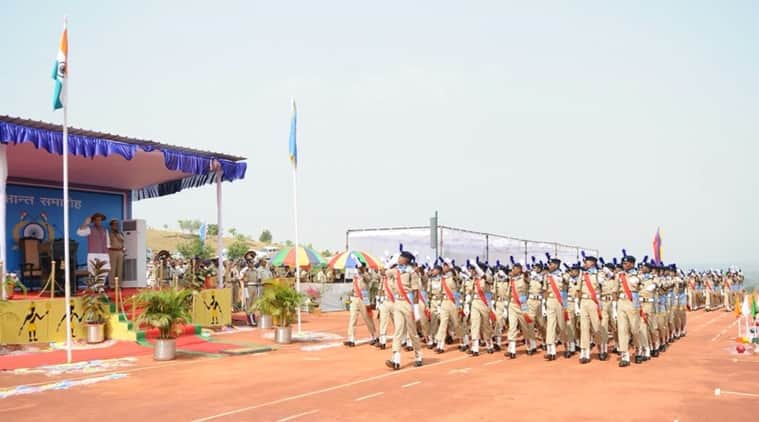 As the recruits stood in formation, Rajnath Singh and Raman Singh paid tribute to them. (Source: Twitter/@rajnathsingh)

Monday was the culmination of a total of 44 weeks of such modules, which also focussed on “good public relations, respect for human rights, and care for weaker sections of society.” As the recruits stood in formation, Rajnath Singh and Raman Singh paid tribute to them, with the Home Minister saying, “Today, you have shown that courage, valour and talent does not only exist in the big cities.”

“One of the primary problems we have faced, and raised often with the government, is the lack of local knowledge and knowhow in our camps. We have always asked for some local DRG or police personnel in our camps, this will negate that need to some extent,” said a senior CRPF official.

“All of these personnel have grown up deep inside Bastar, and know the terrain, which will be a huge asset. They also know the language, which is often a subject of disconnect between the CRPF and the local population. Their presence will increase a sense of confidence that people have with us. We see allegations made often against the force. The presence of women should bring that down at two ends. One, we will be able to counter any false allegations. And second, that these personnel are locals, and are less likely to be aggressive or frustrated when dealing with their own people, increasing our own levels of sensitivity,” said the official.

The idea that the CRPF was also a source of employment was also a driving factor, said officials. As one recruit said, he had first looked at the paramilitary force only as a means of employment. “The force came to my village in Bijapur and asked people to fill forms. I studied till Class 12, and filled various forms, almost getting through to the SSB. So I filled this one too. A year later, I am here. And now, it is no longer just about employment. When I saw such big people talking about us, I feel a sense of pride,” the recruit said.

Yet, with the recruitment exclusively from Bastar, many of the dangers that lie ahead will be at home. A women recruit said, “I have wanted to be in the forces, and filled forms before for the police. But my mother keeps telling me not to, because our lives will be in danger. I now worry, not for myself, but for them.”

On Monday, senior officials gave recruits constant reminders to keep their identities anonymous. An assistant commandant of the 241 battalion said, “Over the course of the training programme, the mother of one recruit and the brother of another were killed by Maoists. Some others have been threatened that their land will be taken away if their children don’t return.”

Those involved in training said with the nature of the conflict so complex, there were unique challenges that presented themselves over the 44 weeks. “What was easier to deal with was the physical dimension. Ninety percent of them, despite the relaxation in intake norms, were undernourished when they came. So it took us a month of modelling a regimen to fix that. More importantly, the Maoists that they have to fight, come from their own villages, they will have grown up with them. So we spent time telling them they are not the enemy, but people that have to be brought back to the right path. How this conflict in their minds will work when they reach the field, remains to be seen,” an officer said.

A senior CRPF officer, in charge of operations in Chhattisgarh, said, “In some cases, they themselves were aggrieved by Maoists. But the first six months is crucial. If we get success, it will raise morale. They will take at least a month to enter the field. The recruits now go on leave, and then there is pre-induction training at the places where they will be deployed. Given that we had to delay the passing-out parade for dates for the Home Minister, some of that training has already been done here, but area specific modules still remain.”

By 11 in the morning, an hour after the ceremony had ended, the new recruits milled around with their families, some posing for pictures with senior CRPF men including DG RR Bhatnagar. Outside some made a beeline for the dais which Rajnath Singh and Raman Singh had vacated. As one group stood waiting for the photographer to click, one recruit shouted, “The CRPF insignia must come clearly. We are the first Bastariya Battalion.”

Let’s forget past, forge ties for future: Congress and JD(S) on Karnataka alliance