Donald Trump India Visit Day 2 HIGHLIGHTS: Heard about attacks but did not discuss with PM Modi, US President on Delhi violence

Donald Trump India Visit Day 2 HIGHLIGHTS: The US President announced that the two leaders have finalised defence deals worth $3 billion. On terrorism, Trump said, "We have agreed to cooperate in dealing with radical Islamic terrorism."

“India is going to be a major player in the next 50 to 100 years; India is going to have a phenomenal future,” US President Donald Trump said while briefing the media. (Source: MEA/Twitter)

Donald Trump India Visit Day 2 HIGHLIGHTS: Concluding his two-day visit to India, US President Donald Trump Tuesday said both countries signed a $3-billion helicopter deal and touched upon the issue of the Citizenship (Amendment) Act while briefing the media.”We did talk about religious freedom. The PM said he wants people to have religious freedom. They have worked really hard on it. I heard about the individual attacks but I did not discuss it,” Trump said when asked about the CAA, emphasising the two leaders did not discuss the contentious law.  When asked about the ongoing violence in Delhi, Trump called it an “internal matter” and said, “It’s up to India”.

Prime Minister Narendra Modi and US President Donald Trump, earlier in the day, issued a joint statement during which India and the US inked three MoUs, including one in the energy sector, and agreed to initiate talks on a major trade deal. Modi and Trump also resolved to fight terrorism.

On the second day, Trump received a ceremonial reception at Rashtrapati Bhavan followed by a wreath-laying ceremony at Rajghat. He was accompanied by the US First Lady Melania Trump, daughter Ivanka Trump and President Ram Nath Kovind. Meanwhile, Melania Trump visited a Delhi government school in South Delhi and observed a happiness curriculum session — where students and teachers meditate, chat, tell stories and share jokes for 45 minutes each day.

Donald, Melania Trump leave for US after attending dinner banquet 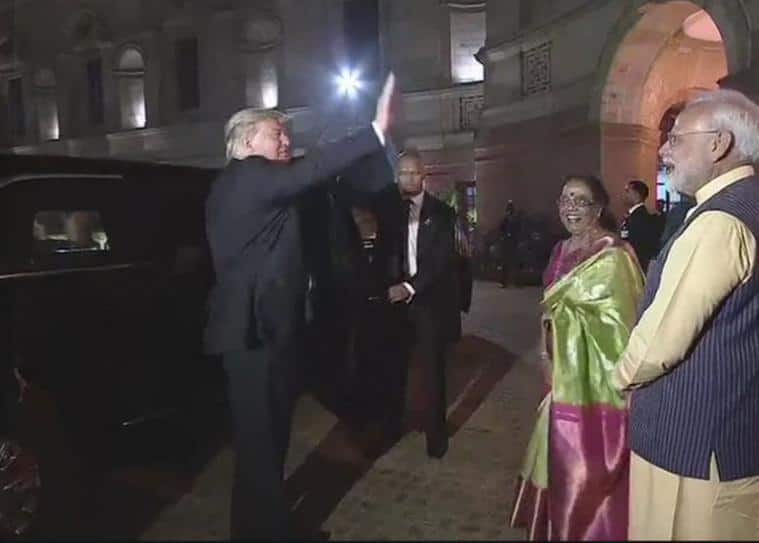 #WATCH Delhi: US President Donald Trump & First Lady Melania Trump received at Rashtrapati Bhawan by President Ram Nath Kovind and his wife Savita Kovind. A dinner banquet will be hosted by President in honour of the US President. pic.twitter.com/nUXYUR2D7R

During the press conference, US President Donald Trump said the conviction of former movie producer Harvey Weinstein over sexual assault and rape was a victory that sent a strong message, Reuters reported.

On Monday, Weinstein was found guilty of sexually assaulting a former production assistant and raping a onetime aspiring actress.

India, US can do larger trade deal much fast: Piyush Goyal

Commerce and Industry Minister Piyush Goyal on Tuesday said India and the US can finalise a larger trade deal "much fast". His statement comes after Prime Minister Narendra Modi and US President Donald Trump held delegation-level talks on key issues such as trade and energy cooperation.

"Hopefully we will close the first set of the limited engagement which we have already discussed and finalised ...We will get into legal vetting and close that quickly," PTI quoted Goyal as saying.

The minister said both the leaders have decided to formally engage to move towards a free trade agreement (FTA) between the two big economies.

When asked how fast India and the US can finalise an FTA, he said "I would personally think that we can do a much larger trade deal much fast for 2-3 reasons". (PTI)

Trade deal with India towards end of year: Donald Trump

When asked about the trade deal, US President Donald Trump said: "If the trade deal happens with India, it will be towards the end of the year. We have a large deficit of USD 24 billion with India that is very high," he said.

US to be treated fairly: Trump on India-US trade ties

Donald Trump on CAA: Don't want to say anything on CAA; it is up to India. Hope it will take the right decision for its people.

Trump on trade relations with India: The US has to be treated fairly.

Trump on tariffs in India: We are being charged large amount of tariffs...I think you have to pay the highest tariff when you deal with India, Harley-Davidson has to pay tremendous tariffs when they send motorcycles here & when India sends to us, there is virtually no tariff.

Kashmir big problem between India, Pak. They will work it out: Donald Trump

Donald Trump: I didn't say anything about that (being mediator). Kashmir obviously is a big problem between India and Pakistan, they are going to work out their problem. They have been doing it for a long time.

Moments ago Trump said: We talked a lot about it today. I said I will do whatever I can do to help as my relationship with both gentlemen (PM Modi&Pak PM) is so good...Anything I can do to mediate/help, I'd do. They (Pak) are working on Kashmir

When asked his country imposed a travel ban on Muslims, Trump said, "We won the travel ban in India. it's not against Muslims, it's against areas."

Donald Trump on Pakistan: PM Modi will deal with terror. We discussed Pakistan at length. I have a good equation with Pakistan PM Imran Khan. They are working to control cross-border terrorism.

Kashmir a thorn between India, Pak; two sides to every story: Trump

When asked about terrorism emanating from Pakistan, Trump said: We talked a lot about it at length today. No question it is a problem. They are working on it. I said I will do whatever I can do to help because my relationship with both gentlemen (PM Modi & Pak PM) is so good.

On the Kashmir issue, Trump said: Kashmir is a thorn between India and Pakistan. Modi is a strong man. Offered to mediate. There are two sides to every story.

Delhi unrest an internal matter: Trump on violence over CAA

Speaking on the Delhi violence over the CAA Trump said, "Delhi unrest is an internal matter. It's up to India. "

Pretty close, all happy about it: Trump on US-Taliban peace deal

Donald Trump: We had a great time. We had great meetings... This is a tremendous country. I think they like us more than they ever liked us. There is a great relationship between the Prime Minister and myself.When asked about the US peace deal with the Taliban, Trump said: Yes, I spoke to PM Modi on it. I think India would like to see it happen. We are pretty close. Everybody is happy about it. Russia, Syria and Iran should do it.

India does not have a problem: Donald Trump on Coronavirus

US President Donald Trump briefs the media on his two-day visit and addressing the issue on Coronavirus, he said people are recovering. "India doesn't have much of a problem," he said.

Trump: We signed a $3bn helicopter deal. We also signed a pact of energy.

Watch: India-US partnership stronger than before

Foreign Secretary Harsh Vardhan Shringla said on matters of security and defense there was an understanding that we have a strong strategic partnership and referred it to as a comprehensive strategic global partnership. "This is a partnership that has encompassed an extraordinary increase in both exchanges as well as cooperation in various security domains," he said.

Foreign Secretary Harsh Vardhan Shringla said useful and comprehensive discussion on trade took place between PM Narendra Modi and US President Donald Trump. 'There was an appreciation that it increased steadily year on year over the last few years, US exports to India had a fairly dramatic increase,' he said.

'I think the two leaders (Prime Minister Narendra Modi & US President Donald Trump) also decided to move towards what was referred to as a 'big deal' in the trade sector,' Shringla said.

Markets will crash if I lose: Trump on US Presidential elections

Ahead of the US elections, President Donald Trump told the CEOs that Democrats are "radical" and "out of control". When asked what will happen to the markets in case he loses, Trump said the market will crash.

"Markets will soar if I win the elections," he said.

India is buying $3 billion worth of helicopters: Trump to CEOs

Concluding the meeting with India INC at the US Embassy, President Donald Trump said India is buying 3 billion US dollars worth of helicopters.

He also claimed the Coronavirus outbreak will be under control and said China is working very hard to contain coronavirus. "It looks like they are getting it more and more under control," Trump said while addressing the media.

In a joint statement with PM Modi, US President Donald Trump said that together India and US are working to revitalise the Quad (Quadrilateral Security Dialogue) initiative with the US, India, Australia and Japan on counter-terrorism and maritime security to ensure safe Indo Pacific region. 'As we deepen our partnership with India, we remember that our two countries are united by shared traditions of democracy and constitutions that protect freedom, individual rights and rule of law,' the US president said.

Trump claimed that since he took office, exports to India increased to almost 60 per cent and exports of high-quality American energy grew by 500 per cent.

US First lady Melania Trump, earlier in the day, attended a 'Happiness Class' at a south Delhi government school and said she was inspired by the curriculum, noting it has set a "healthy and positive" example for educators. "Thank you for welcoming me. This is my first visit to India. People here are so welcoming and kind," she said to the school administration.

Our teams have made tremendous progress for a comprehensive trade agreement: Donald Trump

Donald Trump says, "Our teams have made tremendous progress for a comprehensive trade agreement and I'm optimistic we can reach a deal of great importance to both countries. Since I took office, US exports to India are up nearly 60 per cent and exports of high-quality American energy have grown by 500 per cent."

On Monday, with Prime Minister Narendra Modi and First Lady Melania Trump on the stage at the Motera stadium, Trump called Modi a “very tough negotiator” and said he is optimistic that they are in the “early stages of discussion” for an “incredible” trade deal.

Seeking to deepen ties with India, Trump hailed “India’s rise as a prosperous and independent nation” as “an example to every nation”, called out “radical Islamic terrorism”, and took an oblique swipe at China for seeking to claim power through coercion unlike India.

Accorded a colourful welcome in Ahmedabad where thousands lined the streets and packed the stadium in Motera on a hot afternoon to cheer him at the Namaste Trump event, the US President, who was accompanied by First Lady Melania Trump, daughter and advisor Ivanka Trump and son-in-law Jared Kushner, said both countries are “firmly united in our ironclad resolve to defend our citizens from the threat of radical Islamic terrorism”.

In his speech, Modi praised Trump as someone who “thinks big” and that his visit will start a “new chapter” in Indo-US ties to bring “peace and prosperity”. He appreciated Melania Trump for her campaign for a “healthy and happy America”, and her slogan “Be Best”, and said, “what you are doing is great”.

$3-billion deal with India: ‘Some of the most feared military equipment’

On table for today, several pacts and talks on a future trade deal