Doctors’ strike Today India LIVE News Updates: The 31 representatives made the formal announcement at NRS Medical College and Hospital in Kolkata, where the death of a patient followed by an attack on two junior attacks triggered the week-long strike.

Doctors’ strike Today India LIVE News Updates: Doctors across West Bengal on Monday announced to withdraw the ongoing protest after West Bengal Chief Minister Mamata Banerjee agreed to their demands during a meeting at Nabanna. The 31 representatives made the formal announcement at NRS Medical College and Hospital in Kolkata, where the death of a patient followed by an attack on two junior attacks triggered the week-long strike.

The Indian Medical Association (IMA), on the other hand, is observing a nationwide strike, with the withdrawal of non-essential medical services, including OPD services, for 24 hours starting 6 am today. Emergency, casualty and ICU services, will remain unaffected. Doctors at AIIMS in the national capital, who had earlier decided to stay away, joined the protests after a junior doctor was assaulted at its trauma centre earlier today.

Meanwhile, the Supreme Court today said it will hear on June 18 a plea seeking safety and security of doctors in government hospitals across the country. The plea was filed on Friday in the wake of protests by doctors in Bengal against the assault on their colleagues by the family of a patient, who died on Monday night. The petition has also sought directions to Union ministries of home affairs and health and West Bengal to depute government-appointed security personnel at all state-run hospitals across the country to ensure safety and security of doctors.

Indian Medical Association has called for a nationwide strike today. Doctors in Bengal have agreed to resolve the impasse. Follow LIVE updates in Bangla, Tamil and Malayalam

West Bengal Governor Keshari Nath Tripathi welcomed the "amicable settlement" between the government and protesting doctors. "He appreciates the initiative taken by the Chief Minister and also the junior doctors to resolve the impasse. He hopes that the doctors will take up the work of care and treatment of patients," a statement released by the press secretary to the Governor read.

"This was not a protest to hike our salaries. This was a protest to ensure our security. If you have any complaints, you can formally register that. Don't abuse us, don't be violent. We condemn any kind of assault on any person from any profession," the doctors said.

Mamata Banerjee has assured of steps in next three days, say junior doctors

"The Chief Minister has sent a summary of the points we discussed in the meeting. She has promised us to take steps accordingly within the next three days. We are thinking of and looking forward to a constructive doctor-patient relationship besides a constructive medical infrastructure," the doctors said.

"We extend our heartfelt gratitude to the CM. After an enormous movement, the meeting and discussions with our CM met a logical end. Considering everything, we expect the government to solve the issues as discussed in due time," the junior doctors said.

The doctors in Bengal have formally called off the strike.

Healthcare services were severely affected across the country today as doctors wearing helmets and forming human chains went on a strike in solidarity with their protesting colleagues in Bengal. A large number of patients and their relatives caught unaware of the strike, were seen waiting outside various hospitals, appealing to authorities for help. In many government and private hospitals across the country, OPDs remained closed and scheduled surgeries were postponed. However, emergency services remained operational.

Watch: Doctors celebrate at NRS after meeting with Mamata Banerjee

Union Health Minister Harsh Vardhan today said the government will "revisit" the issue of drafting a central law regarding the safety of medicos at healthcare facilities. Vardhan said he has already written to all states requesting chief ministers to consider enacting specific legislation for protecting doctors and medical professionals from any form of violence, along with suggesting a model law proposed by the IMA. "We will revisit this problem and see if we can do something at the central level about drafting any such law. It was visited earlier by our law people," he told reporters outside Parliament. 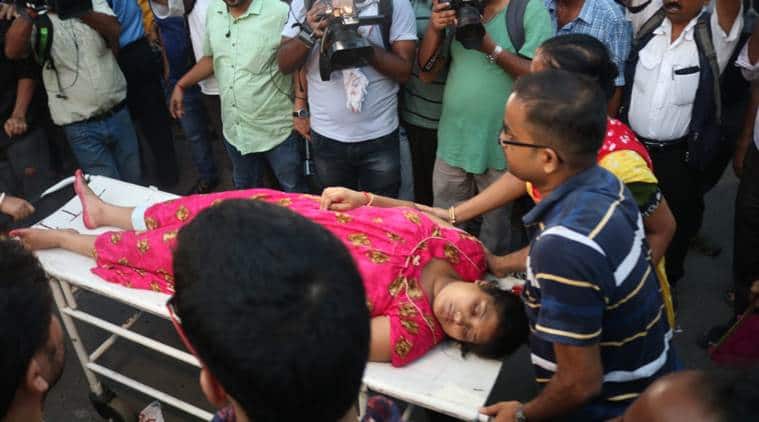 Doctors in Tamil Nadu formed human chains, wore black badges and helmets as they joined their fraternity in the rest of the country to seek a central law to ensure protection and safety for them. Though services, including outpatient consultations, were not hit in the government sector, those in the private category were affected. Doctors in government hospitals worked wearing black badges. "We want protection and that was conveyed by wearing black badges. Our work is on as usual," a government medical college hospital dean was quoted as saying by PTI.

In Tripura, more than 1,000 doctors joined the nationwide strike led by the IMA. Speaking to indianexpress.com, All Tripura Government Doctors Association Joint Secretary Koushik Chakraborty said OPD services across the state were stopped as a mark of protest against the attack on doctors. However, Chakraborty said no patient would return unattended from government hospitals as senior doctors and specialists joined the emergency services to compensate for the absence of OPD.

Doctors assure to withdraw protest during meeting with Mamata

The doctors have assured to withdraw the protest in Bengal after holding talks with protesters at NRS hospital in Kolkata.

I cannot do everything on my own: Mamata Banerjee tells doctors

"I have tried to understand most of your problems. You have made some very good suggestions and we shall take that into consideration. I am grateful to you. But yes, we treat our doctors and teachers like god. A lot of people are suffering now. I request you all to take proper care. I cannot do everything without your support. We cannot consider everyone as bad. We will ensure such cases don't happen again. I would say take strong action on spot in case of such situations in the future," Mamata Banerjee said.

Doctors complaint on shortage of space in hospitals

One of the doctors present complained against the shortage of space in hospitals and requested to speed up the process of constructing more hospital buildings.

The Chief Minister also asked a police officer to take note of a suggestion by a representative that a helpline number and an email to report an assault should be set up across hospitals.

CM continues to listen to grievances of protesting doctors

The Chief Minister continues to listen to the grievances of the representatives at Nabanna.

During the meeting, the Chief Minister also directed the formation of grievance redressal units in all West Bengal hospitals as proposed by junior doctors.

During the meeting, Rajiv Sinha, the health secretary of the state, said the government will deploy additional 125 police personnel inside the NRS hospital to enhance security. The Chief Minister urged the doctors to frame a package to set up reinforced gates at emergency departments.

After one of the representatives from Cooch Behar said, "We want you to stand beside junior doctors and support them. If you tell them, that it is not right to attack the doctors, it'll be better," Mamata replied, "We have always condemned the attack against the doctors."

The agitation was triggered by an attack on June 10 on two doctors at the NRS hospital allegedly by neighbours and relatives of a patient who died. Since then, the strike called by doctors has affected most health services, including at OPDs, in state-run hospitals — a number of doctors have also resigned from service.

Joining the protest in Bengal, the IMA had launched a four-day nationwide protest from Friday and wrote to Union Home Minister Amit Shah demanding enactment of a central law to check violence against healthcare workers. In its statement, the IMA said effective implementation of the central law has to be ensured by incorporating suitable clauses.

Hospitals should be declared as "safe zones". Structured safety measures, including three-layer security, CCTV cameras and restriction of entry of visitors should be well defined and enforced uniformly across the country in all sectors, it said. Nineteen states have already passed legislation in this regard and in 2016, an inter-ministerial committee's recommendations document was signed by the IMA with the central government, the medical body said.

The latest decision by the agitating doctors comes a day after they refused to meet the Chief Minister at the state secretariat. The doctors had earlier refused to attend meetings called by Banerjee on Friday and Saturday. Sources in the government said that the latest offer by the doctors still leaves two major points of contention: the presence of media at the talks and the number of representatives that can be allowed on behalf of the doctors.