Shah said both LDF and UDF are only worried about managing their vote banks. 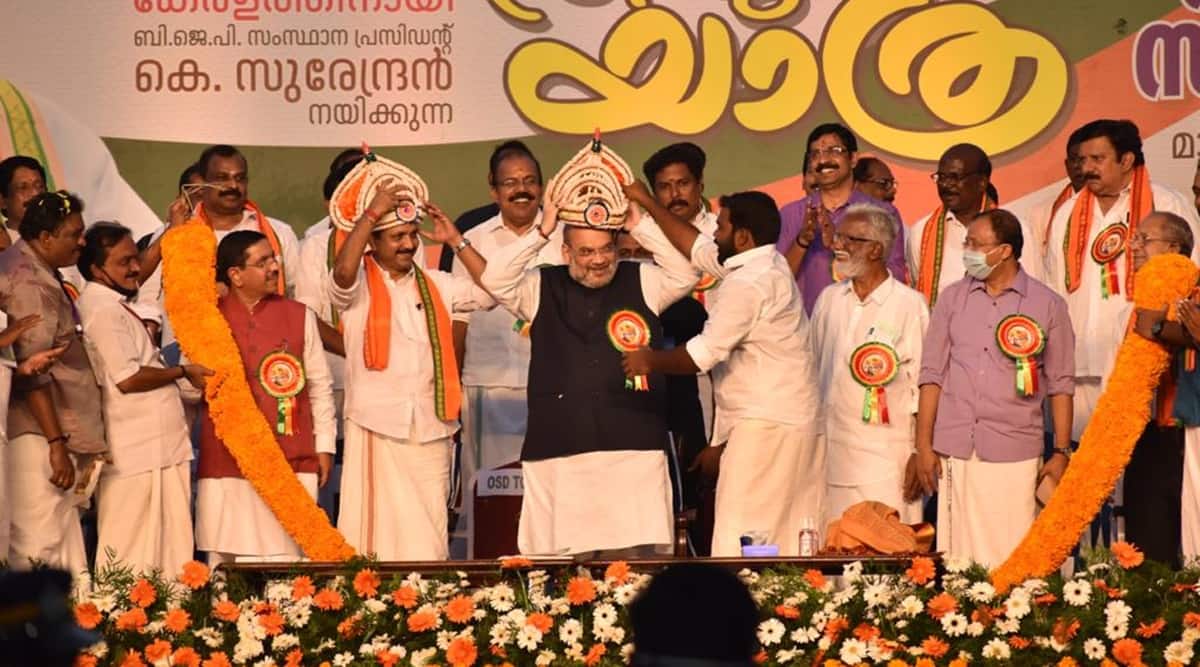 Hitting back at the CPM charge that central agencies are operating in Kerala with political motives, Union Home Minister Amit Shah on Sunday threw questions to Chief Minister Pinarayi Vijayan on the gold and dollar smuggling cases.

Addressing the valedictory function of Vijay Yatra, a pre-poll political tour led by state BJP president K Surendran here, Shah said, “I would like to ask a few questions to the Chief Minister of Kerala. Is he ready to answer those questions publicly? Did the key accused in the dollar and gold smuggling cases work under you in the CM office? Did your government pay her a monthly salary of Rs 3 lakh?,” he asked.

“Is it true that your Principal Secretary appointed the accused, who had fake degree certificates, to a top post? Did you and your Principal Secretary take this woman on a foreign trip on the government’s cost? Did the accused woman frequently visit you in the chief minister’s residence? When the smuggled gold was seized, did your office exert pressure on the Customs? Have not these details been exposed in the investigation by ED and Customs? Did you probe a mysterious death in this issue?’’ Shah added.

Shah said instead of making allegations, the Chief Minister should be ready to answer these questions. “I have information about several other corruption issues. But I don’t want to confuse the Chief Minister. Need answers to the questions,’’ he said.

Shah said the LDF and UDF are worried only about their vote banks. While the CPM, he said, has forged an alliance with the SDPI of Popular Front of India, the Congress has a tie-up with Indian Union Muslim League. In Kerala, he said, the Congress is against the CPM, but the two are contesting together in West Bengal. “In Kerala, Congress is with IUML, in West Bengal they are with the Muslim cleric’s [Abbas Siddiqui] party, and in Maharashtra, Congress is with Shiv Sena. Truly, I don’t understand what the Congress’s policy is,’’ Shah said.

Read |In Kochi suburbs, a triangular election fight in offing with a corporate twist

Referring to the issue surrounding the entry of women at Sabarimala temple, Shah said when the Communist government “harassed the devotees”, the Congress remained silent. The BJP, he said, wanted that the temple be run as per the interest of the devotees. During the function, “Metroman” E Sreedharan, who has recently joined the BJP, was the centre of attention. Shah praised Sreedharan, saying, “the developer of infrastructure, our Metroman, has chosen the BJP for developing the nation’’.

In Kanyakumari, Shah launched the BJP’s campaign for the April 6 Lok Sabha bypoll there and exuded confidence that the party would win the seat and the NDA in Tamil Nadu would emerge victorious in the Assembly polls.

The BJP is part of the AIADMK-led alliance in Tamil Nadu and the party is contesting the bypoll to the Kanyakumari parliamentary segment as part of its seat-sharing agreement with AIADMK.

The BJP has fielded former Union Minister Pon Radhakrishnan for the bypoll, necessitated due to the death of Congress MP H Vasantha Kumar last year of Covid-19.

Addressing reporters, Shah said “we have started the campaign to take the BJP’s Lotus symbol door-to-door”, and appealed to the voters to elect Radhakrishnan. “I am sure about the outcome (of the polls), looking at the excitement of the people”, both in Kanyakumari Lok Sabha seat as well in the Assembly polls, he said.

Later, he embarked on a roadshow at Nagercoil in the district. Shah also garlanded a statue of Congress veteran and former CM of Tamil Nadu K Kamaraj. —WITH PTI INPUTS