On March 12, at the first summit of the leaders of the Quadrilateral grouping, a Quad vaccine initiative was announced under which India would manufacture US vaccines with Japanese funding and Australian logistical support for countries in the Indo-Pacific. 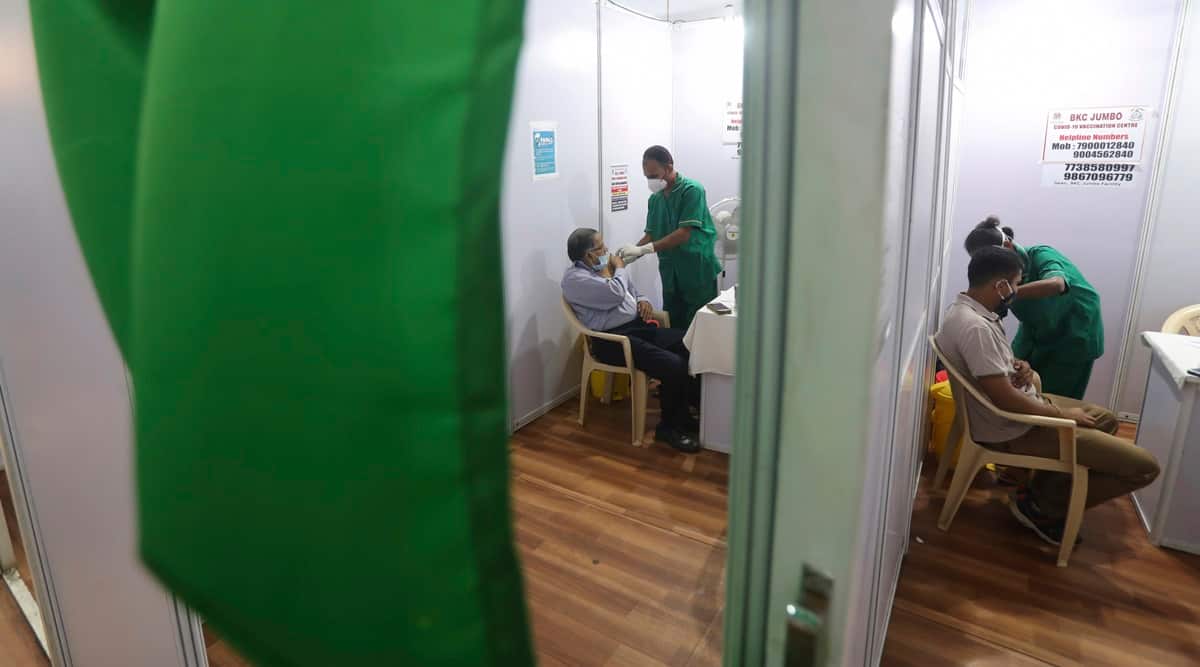 discussions have gathered momentum as the second surge and the emergence of the highly transmissible Delta variant have added to the urgency of vaccinating more people. (AP Photo/Rafiq Maqbool)

With India’s domestic shortage hitting its Covid vaccine supplies and disrupting global supply chains dependent on manufacturing here, moves are afoot to advance the Quad vaccine initiative towards the “end of 2021” — a year ahead of the earlier 2022 deadline, The Sunday Express has learnt.

On March 12, at the first summit of the leaders of the Quadrilateral grouping, a Quad vaccine initiative was announced under which India would manufacture US vaccines with Japanese funding and Australian logistical support for countries in the Indo-Pacific.

The original timeline provided for the supply of at least 1 billion vaccines by the end of 2022.

Over the last month and half, though, as the second surge overwhelmed India’s healthcare system and adversely impacted the global vaccine supply chain, experts from the four Quad countries — US, Australia, Japan and India — are discussing the “nuts and bolts” so that the Quad vaccine initiative can be “front-loaded” so that it is rolled out in the “last quarter of the year,” a source from one of the Quad countries said.

Subscriber Only Stories
View All
In this Bengal district, solid, plastic waste management now a people’s m...
Delhi Confidential | GOAT & the gift: PM Narendra Modi gets a Lionel ...
India looks at options to pay defence dues to Russia: stake sale, bonds, ...
Interview with Revenue Secretary | ‘Measures for widening tax base ...
Buy 2-year plan with SD20 code for special price
Read |Delta Plus in India: All about the Covid variant that could trigger third wave

Indeed, discussions have gathered momentum as the second surge and the emergence of the highly transmissible Delta variant have added to the urgency of vaccinating more people at a quicker pace, sources said.

Sources said this could discussed between the Foreign ministers of Quad countries in Italy next week when External Affairs minister S Jaishankar meets US Secretary of State Antony Blinken, Australian Foreign Minister Marise Payne and Japan’s Foreign Minister Toshimitsu Motegi among others at the G-20 Foreign Ministers meeting.

That meeting is scheduled for June 29 at the Palazzo Lanfranchi in Matera and will be chaired by Italian Foreign Minister Luigi Di Maio.

Sources said the Quad vaccine initiative aims to roll out a substantial portion of the 1 billion vaccines for countries in the Indo-Pacific region, including India.

“This could be the tsunami moment in vaccines,” a top Indian government source said, cautiously optimistic of the discussions so far. The reference is more than metaphorical.

A diplomat from a Quad partner country said: “This could be like what happened in December 2004, when the Quad countries — the US, Australia and Japan — had come together to help India in the tsunami-affected areas.” In fact, that had sowed the seeds of the Quad grouping.

Sources said that Kurt Campbell, the Indo-Pacific coordinator in the Biden administration, had pushed for the Quad vaccine initiative which was announced after the first-ever Quad leaders’ initiative in March.

According to the plan, the US Development Finance Corporation (DFC) will work with Biological E Ltd., to finance increased capacity to support Biological E’s effort to produce a “portion of” the 1 billion doses of vaccines, including the Johnson & Johnson vaccine.

According to current procurement timelines, Johnson and Johnson and Biological E’s vaccine — Jansen — is expected to be rolled out from September 2021 on (5 crore doses every month). This will add to 20 crore doses for India up to December this year.

So far, discussions among Quad countries has revolved around this “20 crore”, and “beyond” — if the Quad vaccine initiative kicks in the last quarter of this year.

For this to happen, the Quad partners will have to step up.

Japan, through JICA, is in discussions to provide concessional yen loans for the Indian government to expand manufacturing for vaccines. Australia will have to contribute for the provision of vaccines and “last-mile” delivery support.

Pushed by Supreme Court, Centre replies: Plan to vaccinate all adults by end of the year