BJP MLA O P Sharma claimed that the “illegal Bangladeshi immigrants” and “Rohingya” were responsible for rising crime rate in the city. 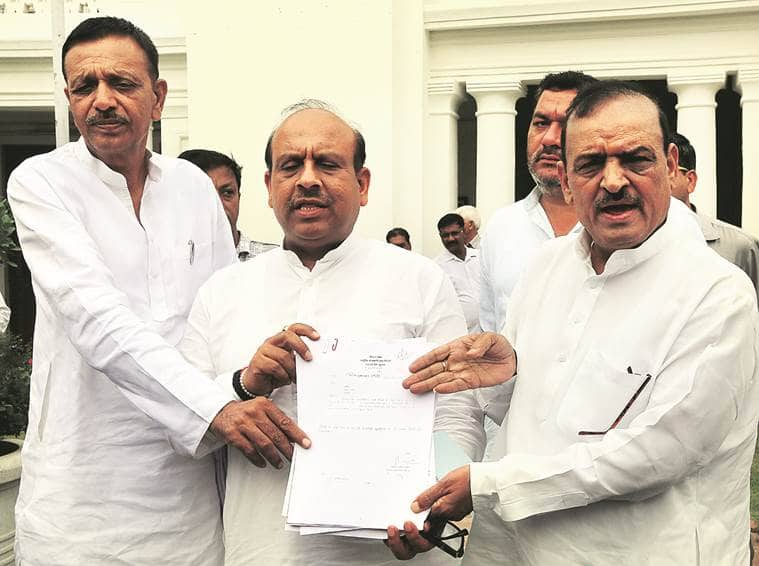 Ripples of the National Register of Citizens (NRC) exercise in Assam were felt in the Delhi Assembly Tuesday, with the BJP demanding a similar counting in the capital to expel “illegal immigrants from Bangladesh”. The three BJP legislators, led by Leader of Opposition Vijender Gupta, also sat on a dharna outside Chief Minister Arvind Kejriwal’s chamber in the Assembly after Speaker Ram Niwas Goel turned down their demand for a discussion on the issue.

Leader of Opposition in the Delhi Assembly Vijender Gupta claimed Delhi Police had deported around 945 Bangladeshi nationals between January and July 2018. “Delhi has come to occupy the second spot after West Bengal in terms of such illegal immigrants. The AAP government is clearly pro-illegal Bangladeshi in nature. They treat them as vote banks while jeopardising India’s security,” Gupta told The Indian Express later.

ALSO READ | Question of identity in Assam sparks fear in Delhi-NCR’s slums: ‘When it comes to hunger, boundaries get blurred’

Gupta said it was only in recent years that batches of illegal immigrants have allegedly started settling in places like Noida and Gurgaon. “Delhi has been a hotspot. The issue warrants a discussion but the Speaker resorts to marshalling us out whenever we raise it. I have filed two notices demanding a discussion but all my efforts have been stonewalled. But I will not back down,” he said.

BJP MLA O P Sharma claimed that the “illegal Bangladeshi immigrants” and “Rohingya” were responsible for rising crime rate in the city.

Goel said he would not allow any issue to be raised beyond all that is officially listed for the day.

Gupta had raised the issue on Monday, the first day of the session. On Tuesday, he demanded that the matter be discussed under the Assembly’s calling attention motion. “We fail to understand why the AAP government is shying away from a debate on an issue which has bearings on our national security. There should be an NRC in Delhi as well. Why will bona fide citizens of India continue to fund them? Many of them have procured ration cards illegally,” Sharma said.

“We also believe that the rise in the number of such illegal immigrants from Bangladesh and Rohingyas have something to do with the increase in crime rate in the city. This affects our national security,” Sharma said.
Asked if he has any official data to back his claims, Sharma said, “Why is the government shying away from sharing statistics?”

Setting the bar with lessons in heady mixes