Kisan Kranti Yatra: The protesters were stopped along the Delhi-Uttar Pradesh border earlier in the day as police used teargas shells and water cannons to disperse them.

Kisan Kranti Yatra:  Unsatisfied with government’s assurance to look into the matter, Bharatiya Kisan Union president Naresh Tikait on Tuesday said the farmers will continue with the protest until the demands are met. Earlier today, Home Minister Rajnath Singh had agreed to meet most of the demands of the thousands of Bhartiya Kisan Union (BKU) protesters, who are on a march from Hardwar to Kisan Ghat in the national capital to protest against the alleged apathy of the BJP government towards the farming community. The protesters were stopped along the Delhi-Uttar Pradesh border earlier in the day as police used teargas shells and water cannons to disperse them. Anticipating breakdown of law and order situation, Delhi Police has imposed week-long prohibitory orders in east Delhi.

The Kisan Kranti Yatra, which began from Tikait Ghat in Haridwar on September 23, is the first of its kind by the BKU since the death of its founder Mahendra Singh Tikait on May 15, 2011. The Tikait clan, including the patriarch’s four sons, their wives, grandsons and their children have also hit the streets along with others.

Besides unconditional loan waiver, the farmers are protesting against electricity and fuel prices which are shooting through the roof.

Kisan Kranti Yatra: Thousands of farmers are taking part in the kisan rally which is trying to enter New Delhi. Highlights below.

Schools, colleges in Ghaziabad to stay shut on Wednesday

In view of farmers' agitation, schools and colleges will remain shut in Ghaziabad on Wednesday, officials were quoted as saying by PTI today. The order was issued by District Magistrate Ritu Maheshwari. "All schools and colleges in Ghaziabad shall remain closed tomorrow as a preventive measure in view of ongoing farmers' agitation," Maheshwari tweeted.

Thousands of farmers held fort at the Delhi-UP border here Tuesday after police stopped their protest march to the national capital with several including the security personnel getting injured in sporadic violence, as the protesters refused to go back and rejected the government's assurance to look into their demands.

At least 7 policemen and an ACP injured in farmers protest 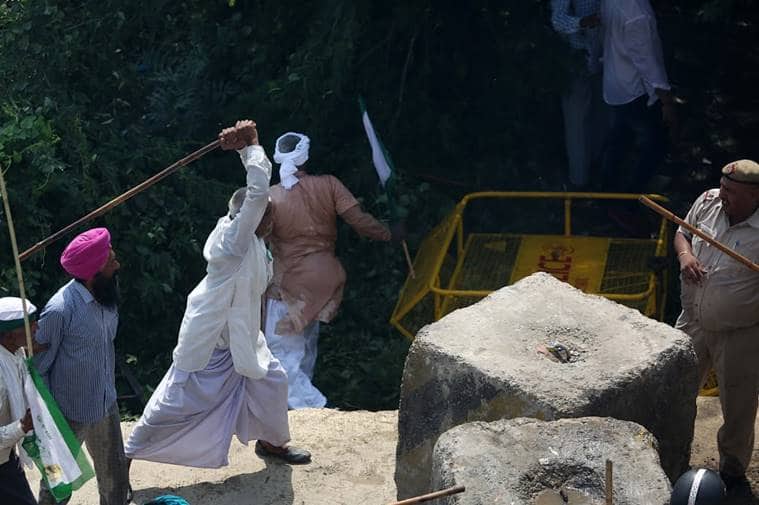 Seven policemen, including an assistant commissioner of police, were injured on Tuesday during the protest by farmers on Delhi-UP border, Delhi Police said here. Police said a section of crowd suddenly turned violent as police tried to persuade the protesters, who were participating in the Bharatiya Kisan Union march, not to break the barricades.

Opposition parties on Tuesday put the blame on the Modi government for what they described as "brutal police action" against thousands of farmers marching towards the national capital, with the Congress alleging that the "Badshah of Delhi Sultanate was drunk with power".

The parties accused the central government of being 'anti-farmer' and demanded allowing the protesters to enter Delhi to peacefully air their grievances, even as the government went into a huddle to mull over ways to convince the farmers to call off their protest.

BJP government has solved all issues of the farmers: UP CM Yogi Adityanath

For the first time since independence, farmers came into the agenda of a government which is evident from the work done by BJP govt in the past 4.5 years for farmers. BJP government led by PM Narendra Modi solved all the issues of the farmers: UP CM Yogi Adityanath pic.twitter.com/g8mPdKZyF7

Bharatiya Kisan Union president Naresh Tikait on Tuesday said the farmers will not accept govt assurance and will go ahead with the protest.

Earlier today, Home Minister Rajnath Singh held discussions with Union Agriculture Minister Radha Mohan Singh and a few others on how to resolve the farmers' issues and pacify them. Union minister Gajendra Singh Shekhawat also spoke to protesting farmers on the Delhi-UP border and assured considering their demands. 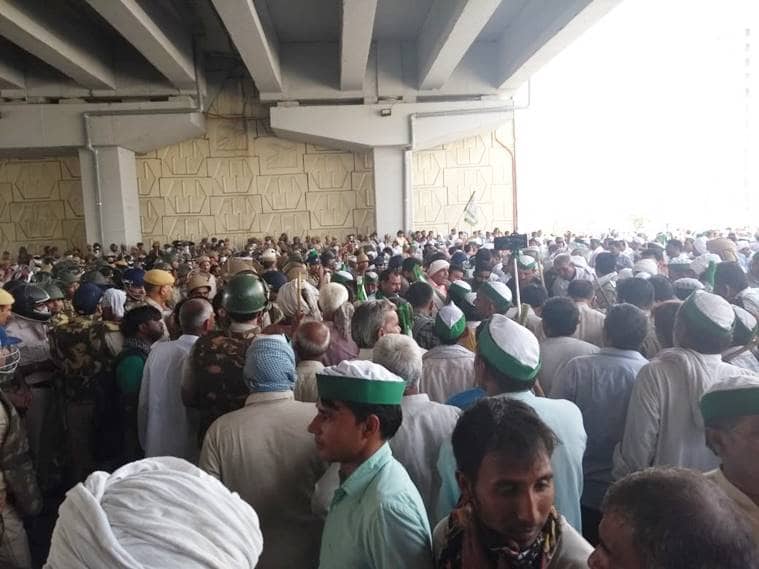 Congress condemns use of force against farmers; resolves to fight for their rights 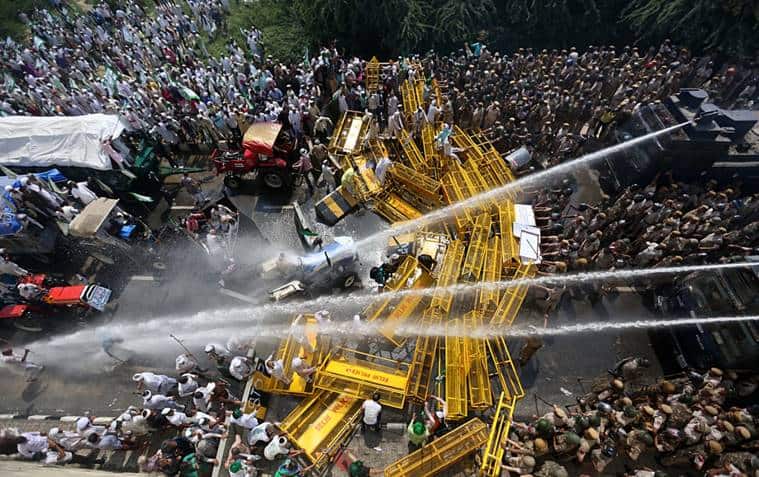 The Congress Tuesday lashed out at the Modi government over the police action against farmers marching towards Delhi, saying 'the Baadshah in the Delhi Sultanate is drunk with power'. Condemning the police action, Congress spokesman Randeep Singh Surjewala said if the Centre can write off huge debt of a few industrialists why it could not waive the loans of farmers.

He criticised Prime Minister Narendra Modi, alleging that 'arrogance has gone to his head'.

'Instead of hearing them out, farmers are brutalised and beaten up. The Baadshah in the Delhi Sultanate is drunk with power,' the Congress leader alleged.

Farmers cannot even come to Delhi to air grievances: Rahul

Congress president Rahul Gandhi Tuesday accused the BJP of "brutally beating up" farmers at the Delhi border on International Day of Non-Violence and said that they cannot even air their grievances in the national capital.

Gandhi's remarks came after farmers marching towards Delhi as part of the Bharatiya Kisan Union's (BKU) protest call over demands ranging from farm loan waiver to cut in fuel prices, were stopped at the Delhi-Uttar Pradesh border Tuesday with police using water cannons to disperse them. 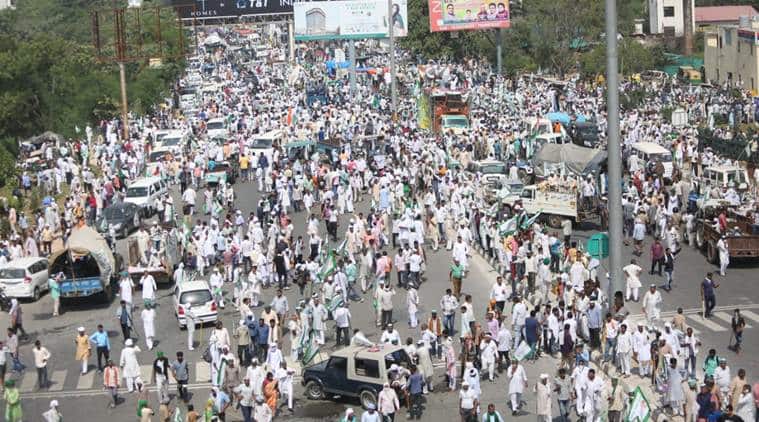 Besides unconditional loan waiver, the farmers are protesting against electricity and fuel prices which are shooting through the roof. (Express photo/Gajendra Yadav)

Swabhimani Shetkari Sanghatana founder Raju Shetti said, "Farmers aren't terrorists or Naxals, they're coming (to Delhi) with demands. Don't they have the right to do that? The Shivraj Singh Chouhan-led government has killed farmers in Mandsaur and today, they're about to lose Madhya Pradesh. I am warning PM Modi, if injustice with farmers continues, he will lose Delhi."

"Home Minister Rajnath Singh met the farmer's leaders and discussed their demands and have reached an agreement on the majority of the issues. The farmers' leaders, UP ministers Laxmi Narayan, Suresh Rana and I will now go and meet the farmers," Minister of State for Agriculture Gajendra Singh Shekhawat said.

Home Minister Rajnath Singh met the farmer's leaders and discussed their demands and have reached an agreement on the majority of the issues. Farmers' leaders, UP ministers Laxmi Narayan ji, Suresh Rana ji & I will go to meet farmers now: MoS Agriculture Gajendra Singh Shekhawat pic.twitter.com/fZvdjMuhY8

Upping the ante against the Modi government, Congress chief Rahul Gandhi said, "On October 2 when the world is observing non-violence day, the BJP's two-year-long festivities for Gandhi Jayanti have started on a violent note. Now, the farmers cannot even come to Delhi to share their woes."

JD(U) national general secretary K C Tyagi said, "Peaceful and unarmed farmers going towards Rajghat were brutally treated, they were lathicharged and teargas shells were fired on them. We condemn this."

Peaceful and unarmed farmers going towards Rajghat were brutally treated, they were lathi charged and teargas shells fired on them.We condemn this: KC Tyagi,JDU #KisanKrantiYatra pic.twitter.com/Lo8ogNe5jH

BKU leader Rakesh Tikait said, "Police action on farmers is wrong. Our leaders are holding a meeting with Home Minister Rajnath Singh. We will decide our next course of action after holding consultations with our leaders."

Police action on farmers is wrong. Our leaders are holding a meeting with Home Minister Rajnath Singh. We will decide our next course of action after consultation with our leaders: Rakesh Tikait, Bhartiya Kisan Union pic.twitter.com/B8Nuf4VNfs

The farmers, riding tractors and trolleys, broke barricades of the UP Police and then started proceeding towards the barricades put up by the Delhi Police, a senior police officer told PTI. Police had to use water cannons to disperse the protestors, who also indulged in sloganeering. Tear gas was also used to disperse the crowd.

Speaking on the "inhuman, unjust and unpardonable treatment of the Narendra Modi-led government", Congress spokesperson Randeep Singh Surjewala said, "What is the Modi government doing on the 150th birth anniversary of Mahatma Gandhi? What is the govt doing on the birth anniversary of Lal Bahadur Shastri who said Jai Jawan Jai Kisan'? The govt is brutally beating up India's farmers. It has launched a police raj and unprecedented atrocities on the farmers of the country. Can India's farmers not come and tell their own government that they are in deep pain and suffering from deep rural indebtedness?"

Why are farmers protesting?

On the top of the demand list is the implementation of the Swaminathan Commission’s recommendations. The commission had submitted five reports between 2004 to 2006 for “faster and more inclusive growth” for farmers. The Commission observed that farmers needed to have an assured access to and control over rightful basic resources. These basic resources include land, water, bioresources, credit and insurance, technology and knowledge management, and markets. It observed that agriculture must be implemented in the concurrent list from the state list — hence putting it as a matter of concern for both the Union and the states. The reason farmers are demanding a full implementation of the recommendations is that it would result in reasonable MSP and small farmers would be secured. Read full story.

Police use teargas to disperse agitators 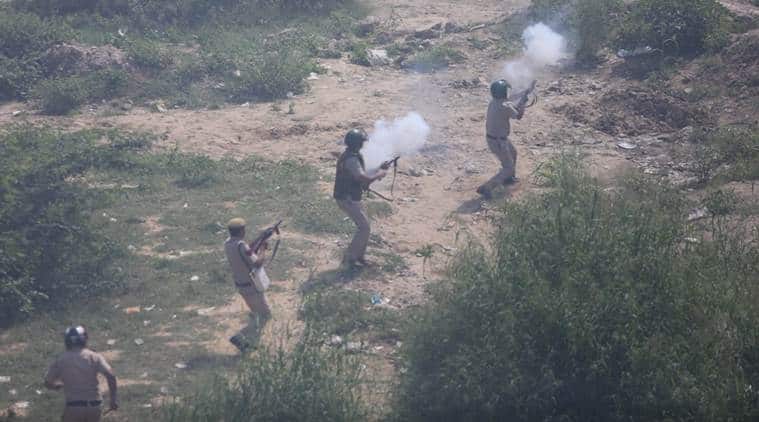 Police use teargas shells to disperse the protesters along the Delhi-Uttar Pradesh border. (Express photo/Gajendra Yadav)

CPI(M) General Secretary Sitaram Yechury told ANI, "It reconfirms the fact that the Modi government is anti-farmer. Instead of providing relief to the farmers, they are exasperating the crisis, by further forcing the farmers to be under the debt burden and distress suicides. We haven't seen such an agrarian distress in India since independence."

It reconfirms the fact that Modi govt is anti-farmers. Instead of providing relief to farmers they are exasperating the crisis further forcing farmers to be under debt burden&distress suicides. We haven't seen such an agrarian distress in India since independence: Sitaram Yechury pic.twitter.com/GPa3cIEfbx

BJP hits back at CM Kejriwal: 'You are only interested in politics'

Hitting back at the Delhi CM, the state unit of BJP said, "Mukhya mantri ji, agar aap maante hai ki Delhi sab ki hain toh bahar se aane wale mareezon ka ilaz Delhi mein kyun nahi hone dete? Kyun mareezon ke saath bhed-bhao kar rahe ho? Sachai toh yeh hai ki aapka na toh kisano se matlab hain na mareezon se. Aapko sirf apni rajneeti se matlab hai (If you agree that Delhi belongs to everyone, then why do you not allow the medical treatment of outsiders in the state? Why do you differentiate between the sick? The truth is that you are neither interested in the farmers nor in Delhi; you are only interested in politics)."