Deep within a forest in Sukma Naxal belt, 1 in 3 in village test positive

In the past week, nearly one out of three people tested in this village -- 91 of 239 -- have tested positive for the coronavirus. 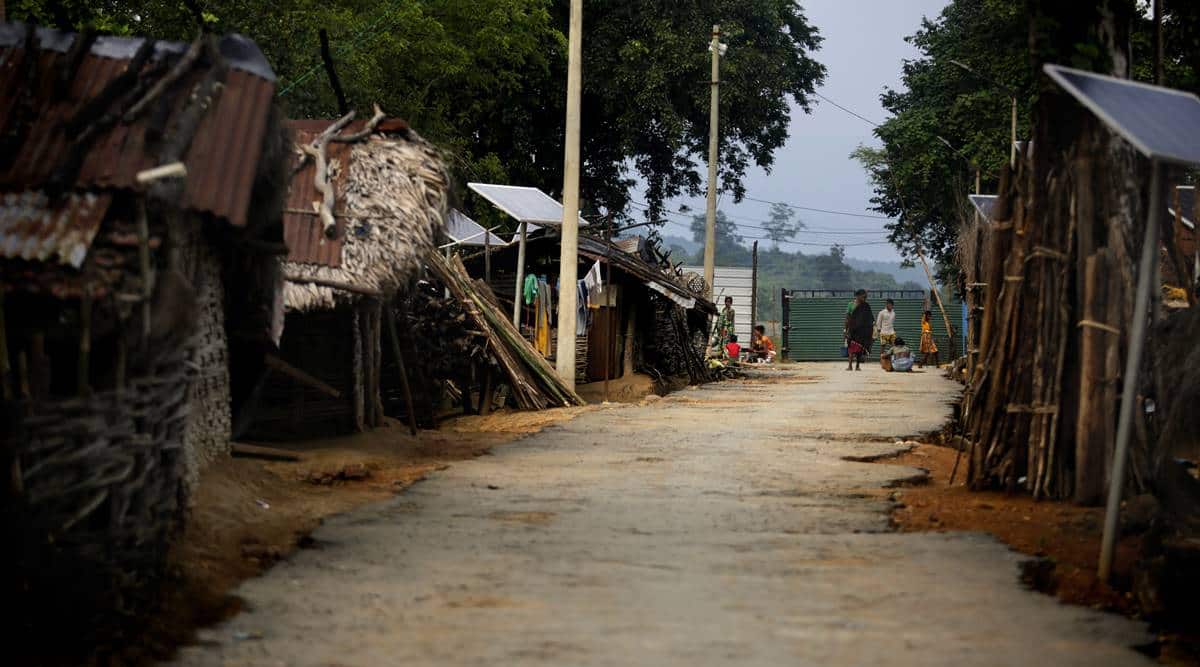 The first case in the village, according to the authorities, was a pregnant woman who tested positive at the district hospital. (Express Photo by Praveen Khanna)

Three armed security personnel accompany nine nurses and two doctors as they head to Karma Gondi, a village in Chhattisgarh’s Naxal-dominated Sukma district, to test for Covid-19. The village, more than 25 km from the nearest highway, is enclosed by a forest. In the past week, nearly one out of three people tested in this village — 91 of 239 — have tested positive for the coronavirus.

All the positive cases have been moved to a Covid care centre at the district headquarters, and the village has been declared a containment zone.

Within Karma Gondi, healthcare workers in PPE kits cross alleys trying to avoid brambles that get stuck in the plastic. The testing area, under a cluster of neem trees, includes two tables and some plastic chairs sourced from the Kukanar Police Station, about 20 km away.

The first case in the village, according to the authorities, was a pregnant woman who tested positive at the district hospital. Villagers however, claimed they alerted a helpline after several fell ill.

The Chhindgarh Covid-19 team reached the village the same day, May 19, that it was told about a possible spread in Karma Gondi. Neharu Markam, who was part of the team, says 41 people tested positive the first day. “All of them had fever. We conducted door-to-door surveillance, and tested those with symptoms first.”

Sukma district has recorded 5,680 Covid-19 cases since March last year and 15 deaths. At 190, it has the lowest active cases in the state. However, the spread to remote areas like Karma Gondi, with minimal health infrastructure, is worrying officials.

Karma Gondi that falls under the Kunna gram panchayat is closest to the Primary Health Centre in Kukanar. However, most villagers take those seriously ill to the district headquarters.

District Collector Vineet Nandanwar says their focus is on early detection, strict monitoring and breaking the chain. “We have made clusters of small villages and appointed nodal heads. We are prepared for over 2,000 cases at a time, even though our active cases have never crossed 500.”

Among those whose sample returned positive at Karma Gondi is Savitri Madkami, 40, who had fever for 10 days before the test was done. “We had been using homemade medicines,” she says, speaking in Gondi. Both her sons, Nanku (22) and Budharu (17), too developed fever.

Madkami has no idea how they contracted the virus. Growing just about enough for their needs on their small land, the family has little contact with the outside world. “Even the mandi is shut now,” she says.

Officials too are puzzled about the source of the virus coming to this isolated stretch. A healthcare professional from Chhindgarh block who does not want to be identified says, “Neighbouring villages had Covid-19 cases months ago. Even those who had travelled from Andhra Pradesh (where many villagers work in chilli farms) returned a month ago. This is a fresh infection, and we don’t know how.”

Says sarpanch Ramkumar Podiyam. “People gathered during the collection of tendu leaves. It is possible the infection spread from there.”

Officials said apart from the health infrastructure, the trust gap when it comes to the government machinery, particularly due to lack of information, is also a challenge. District Collector Nandanwar says recently villagers armed with bows and arrows tried to attack a health team, “accusing them of intentionally testing them positive”.

Among the security personnel accompanying the health team is the Thana incharge of Kukanar police station, Narendra Dubey. “The Naxal threat is there, but even otherwise, if the villagers get aggressive and are armed, we have to control the situation,” he says.