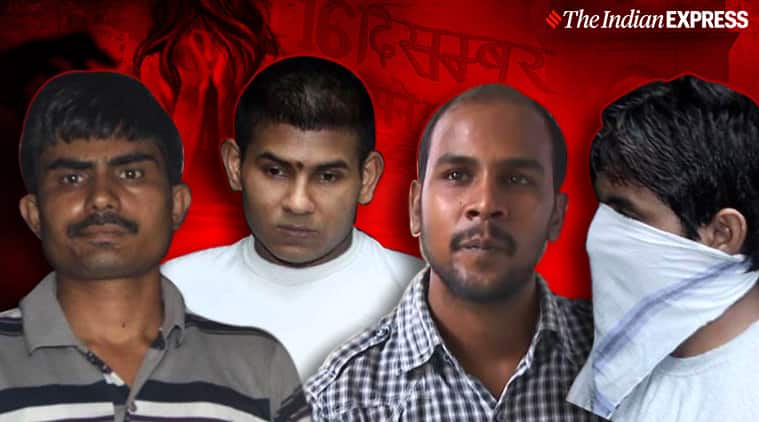 The four convicts of the 2012 Delhi gangrape-murder case were hanged at 5.30 am on Friday, bringing to a close a keenly watched case. The incident, which took place more than six years ago had shocked the country and the world, and brought about changes not only to India’s criminal laws against sexual offences but also women’s safety.

Mukesh Singh (32), Pawan Gupta (25), Vinay Sharma (26) and Akshay Kumar Singh (31) were hanged just before the crack of dawn at Tihar Jail in New Delhi after their petitions filed before a lower court, the Delhi High Court and the Supreme Court were rejected in late-night hearings. They were sentenced to death for the rape and brutal assault of a 23-year-old woman in a moving bus in the national capital on December 16, 2012.

Apart from the four convicts, a juvenile was tried by the Juvenile Justice Board and served the maximum sentence of three years in a remand home. He was released in 2015. One of the accused, Ram Singh, was found dead in prison during the trial.

The horrific crime had sparked massive nation-wide protests, calling for stricter laws for crimes against women and tighter security.

The convicts were executed by hangman Pawan Jallad, who was brought to Tihar from Meerut on March 17. He had earlier carried out a ‘dummy execution’ to test the ropes and other equipment. 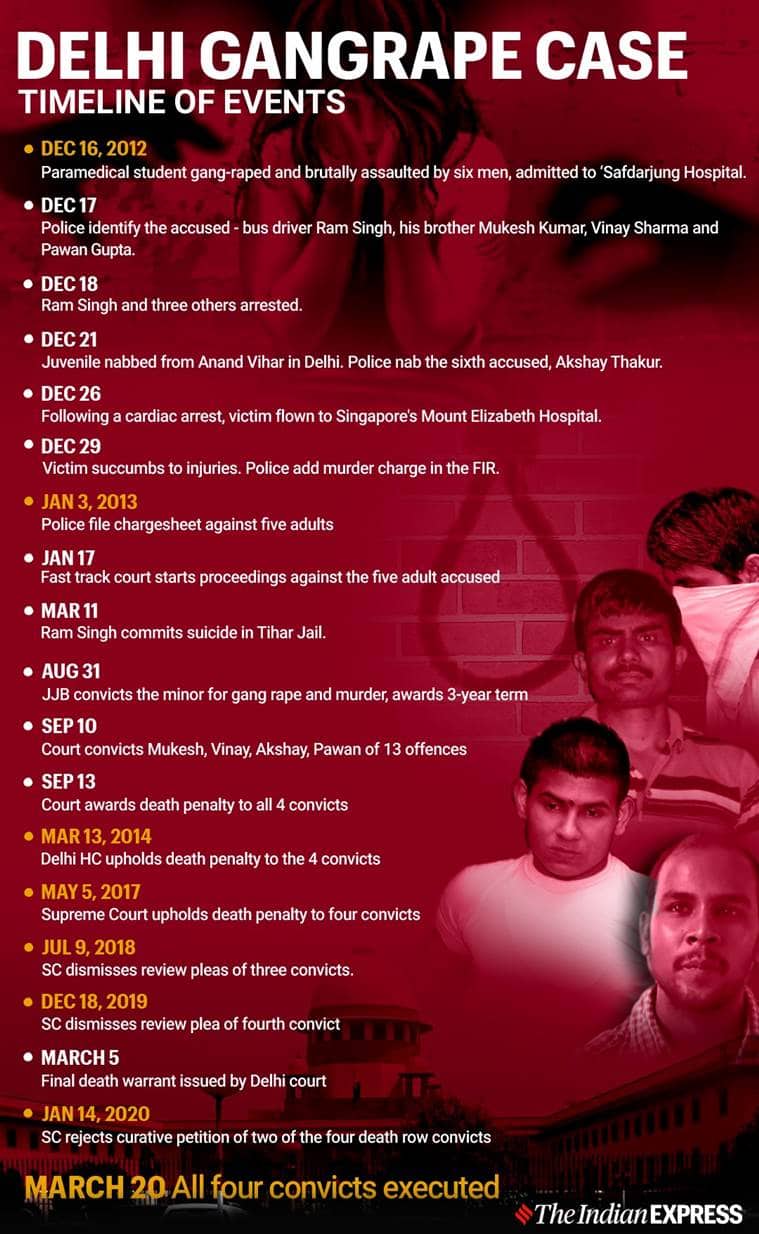 Before the execution, regular health check-ups were done on the convicts. They had also been counselled for the last two weeks. CCTV cameras and jail guards kept a vigil on them to check their diet and prevent any case of misconduct. The convicts were kept in isolated cells and a last family meeting was arranged earlier this week.

What led to the delay in convicts’ hanging

A Delhi court set the date of execution for March 20 after the convicts exhausted all their legal remedies. The Supreme Court Wednesday quashed the last of their curative petitions.

EXPLAINED | How the Supreme Court has historically seen the death penalty

The first death warrant was issued on January 7, two years and eight months after the Supreme Court confirmed the sentences. Thereafter, each convict filed separate petitions, typically moving just before the scheduled date of execution, and thereafter approaching the court to secure a postponement on grounds of pendency of the petition.

Multiple petitions have been filed and rejected during this period — the recent one on Thursday when the Supreme Court rejected the petition of Mukesh Singh who contended that he was not in Delhi on the day of the crime.

The last hanging in the country was that of Yakub Memom, who was convicted in the Bombay blasts case. Memon was executed in 2015. According to Project 39A of National Law University, Delhi, while trial courts handed out 102 death sentences in 2019, in the 27 cases heard in the apex court, 17 saw commutations and three acquittals while two were sent for a fresh trial.

OPINION | 2012 gangrape case convicts are products of a broken society

The Delhi High Court in a late-night hearing held that the grounds raised by the counsel of the convicts, including that one of them is a juvenile, had already been dealt with by courts. A bench of Justice Manmohan and Justice Sanjeev Narula observed that the convicts’ pending pleas in various courts and fora as a ground to stay execution was untenable in law

Standing Counsel (Criminal) Rahul Mehra, appearing for the Delhi government and Tihar jail authorities, opposed their appeal and urged the High Court to dismiss it so that “the execution for tomorrow (Friday) may be upheld”.

Prior to this, a lower court had dismissed the petition too.

Following the HC order, the counsel of three of the four convicts, advocate AP Singh, approached the Supreme Court registrar seeking stay on the execution.

The top court, however, dismissed the plea. “We are not inclined. So far as juvenility is concerned, we already heard it. Other grounds, you raised it in other matters. Allow us to pass order,” Justice Banumathi said

In September 2013, a fast-track court held the four guilty of 13 offences, including gangrape, unnatural sexual assault, and murder of the woman, and attempt to murder her male friend. The decision was upheld by the Delhi High Court in March 2014 and by the Supreme Court in May 2017.

EXPLAINED | The rights of a death row convict

In July 2018, the Supreme Court dismissed the petitions of three of the convicts seeking review of its 2017 judgment, upholding the capital punishment given to them by the Delhi High Court and the trial court.

As the youth erupted into widespread protests and held candlelight marches across all major cities in India demanding the death penalty for the rapists, the government set up a high-level committee under retired Chief Justice of India Justice J S Verma to suggest recommendations for laying the foundations of a new and stricter rape law.

ALSO READ | Her fight: ‘What was my daughter’s role in world?’

The committee released its report within a month, and within two months, the government enacted the Criminal Law Amendment Act, 2013, which brought in significant changes in the then existing rape laws. A broadened definition of rape and stringent punishment were the key features of the new law. It did not recommend the death penalty but stipulated imprisonment for the remainder of the convict’s life. In cases of repeat offenders, the law stipulated the death penalty.