This move assumes significance in the wake of the public standoff between the Government and judiciary over the issue of appointments in the higher judiciary. 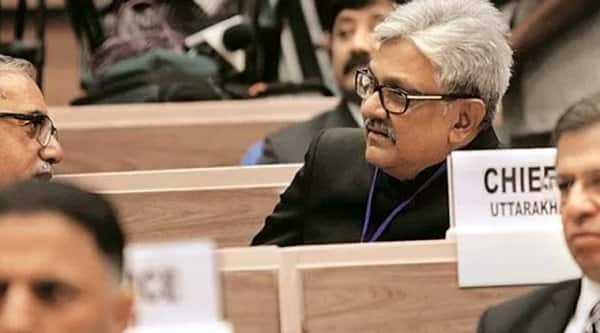 The Collegium had first recommended Justice K M Joseph to the Centre on January 10 along with Advocate Indu Malhotra. (Photo by Neeraj Priyadarshi/File)

The process towards the issuance of presidential warrants for their appointment to the Supreme Court has been set in motion, sources confirmed to The Indian Express.

This move assumes significance in the wake of the public standoff between the Government and judiciary over the issue of appointments in the higher judiciary. Justice K M Joseph’s name was recommended by the Supreme Court Collegium on January 10 this year along with the name of senior counsel Indu Malhotra.

However, the government while agreeing to the elevation of Malhotra to the Supreme Court, returned the Justice Joseph recommendation on April 26. In a letter to Chief Justice of India Dipak Misra in April, Law Minister Ravi Shankar Prasad cited Justice Joseph’s standing in the all-India seniority list of High Court judges, adequate representation for the Kerala High Court — which is his parent High Court – in the apex court, and lack of representation of some other High Courts to request for reconsideration of the recommendation of Justice K M Joseph’s elevation.

It has been learnt that the Government has also decided to go ahead with the Collegium’s recommendation for appointment of Chief Justices of several other High Courts across the country.

The delay in processing the appointment of Justice K M Joseph to the Supreme Court had set off a protracted stand-off between the judiciary and the government. Four most senior judges of the Supreme Court — Justice (now retired) J Chelameswar, Justices Ranjan Gogoi, Madan B Lokur and Kurian Joseph — had addressed a press conference on January 12 warning against the dangers of alleged executive interference in the judiciary and raising questions over the functioning of CJI Misra.

Their press conference also suggested a divided judiciary in the face of a full-majority government at the Centre.

Subsequently, the delay in clearing the names of Malhotra and Justice K M Joseph simmered with Justice J Chelameswar writing on March 21 to all judges of the Supreme Court, asking CJI Dipak Misra to call a full court to discuss the issue of alleged government interference in the appointment of judges.

On April 9, Justice Kurian Joseph, another member of the Collegium, wrote a strongly worded letter to CJI Misra and all judges asking him to set up a bench of seven most senior judges to hear the matter of government’s silence over the recommendations of the collegium for appointment of Justice Joseph and Indu Malhotra.

“Failure to discharge their duty by sitting over on the recommendations of the Collegium doing nothing, in administrative law, is abuse of power. More than anything else, it sends a wrong message which is loud and clear to all Judges down the line not to cause any displeasure to the Executive lest they should suffer. Is this not a threat to the independence of the judiciary?”, Justice Joseph wrote then.

Subsequently, two other members of the Collegium, Justices Ranjan Gogoi and Madan Lokur also wrote to the CJI demanding that he call a “full court” to discuss “institutional issues” and the “future” of the court.

The first meeting of the Collegium after the reconsideration request of Justice Joseph’s name on May 2 had “deferred” the matter. Nine days later, the Collegium decided to reiterate its recommendation but also agreed to consider few more names for elevation to the Supreme Court.

The Collegium which met again on May 16 decided to hold “further deliberation and broad-based consideration of the names of the Chief Justices as well as Judges of the High Courts which are at present not represented in the Supreme Court” before re-sending Justice K M Joseph’s name to the government.

However, the Collegium could not meet until July 16 — by then Justice J Chelameswar had retired — when it decided to reiterate Justice K M Joseph’s name. Moreover, it decided to recommend Justice Banerjee and Justice Saran for elevation to the Supreme Court.

Five questions: Won’t progress until we get our population under 100 crore, says BJP MP