A handful of tourists do come to the ground even now, some to look at the structure, others having visited Kalam’s home at Rameswaram and now stopping over to complete what they count as a “pilgrimage”. 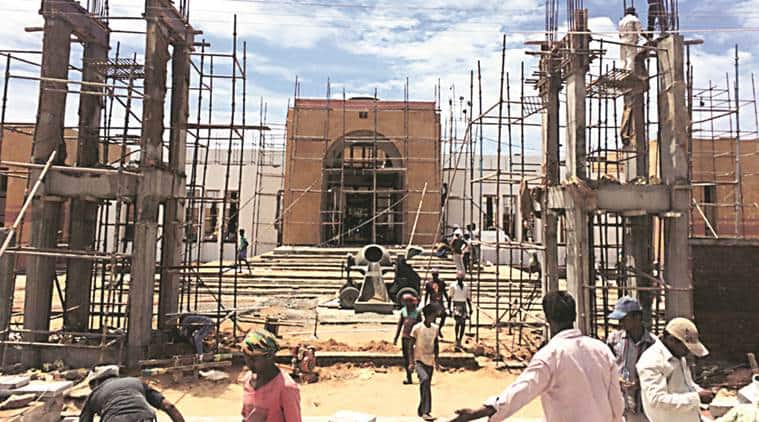 Work in progress at Rameswaram; PM due to visit this month. Sudhakar Jagdish

It’s a Monday afternoon and the road to Rameswaram temple from Pamban is almost deserted, except along a 30-metre stretch that is bustling with activity. Two cranes lift large boulders of concrete, masons lay large slabs on what looks like a stair-like structure, and two men put plaster on the bottom of a dome-like structure. Below them is a board with a large 9 written on it, a countdown on the number of days remaining for completion of work.

This is where former President A P J Abdul Kalam was laid to rest, and where a yellow-and-red memorial is being built.

A truck full of grass carpets arrives. As labourers unload them, the supervisor rebukes them for dumping it on the roadside. “Kisne kaha tha yahan rakhney ke liye… kaun hai driver. Pata bhi hai usko ki Delhi se ye ghaas hai.. ab saare peele pad jaayenge.” He tells the labourers, who understand very little Hindi, to take the grass carpets to the site where red soil fields have been laid out amid sandy surroundings. All the green plants and shrubs, even palm saplings, have been brought from Delhi to give the memorial a green look before July 27, Kalam’s second death anniversary, when the Prime Minister and other ministers are likely to arrive and pay tribute.

Over 300 labourers are at work, with a dozen supervisors — both from the defence ministry and private contractors. “We work from 7 am to 9 pm,” says a supervisor whose company is contracted with DRDO. “It’s a DRDO project and the memorial will be under the defence ministry’s care.” The Centre has allotted Rs 50 crore for the project.

Rameswaram will have a new tourist spot, he says. A handful of tourists do come to the ground even now, some to look at the structure, others having visited Kalam’s home at Rameswaram and now stopping over to complete what they count as a “pilgrimage”.

They are greeted by two ice-cream vendors and a stall selling sea shells and conches. There is a steel-framed bus stop, with a large hoarding of a smiling Jayalalithaa. Buses don’t usually stop here unless asked to, but things will change soon, the supervisor says.

A family from Chennai makes a brief halt. Stepping out of their white SUV, they start taking selfies. “It’s the president’s memorial. so we had to stop,” says Elan. So what’s his view on the upcoming presidential elections? “When is it? I don’t know. For us, there has been only one President. Kalam Sir.”

Uttarakhand floods: Broken barrages rise again in four years, river down to a trickle at places