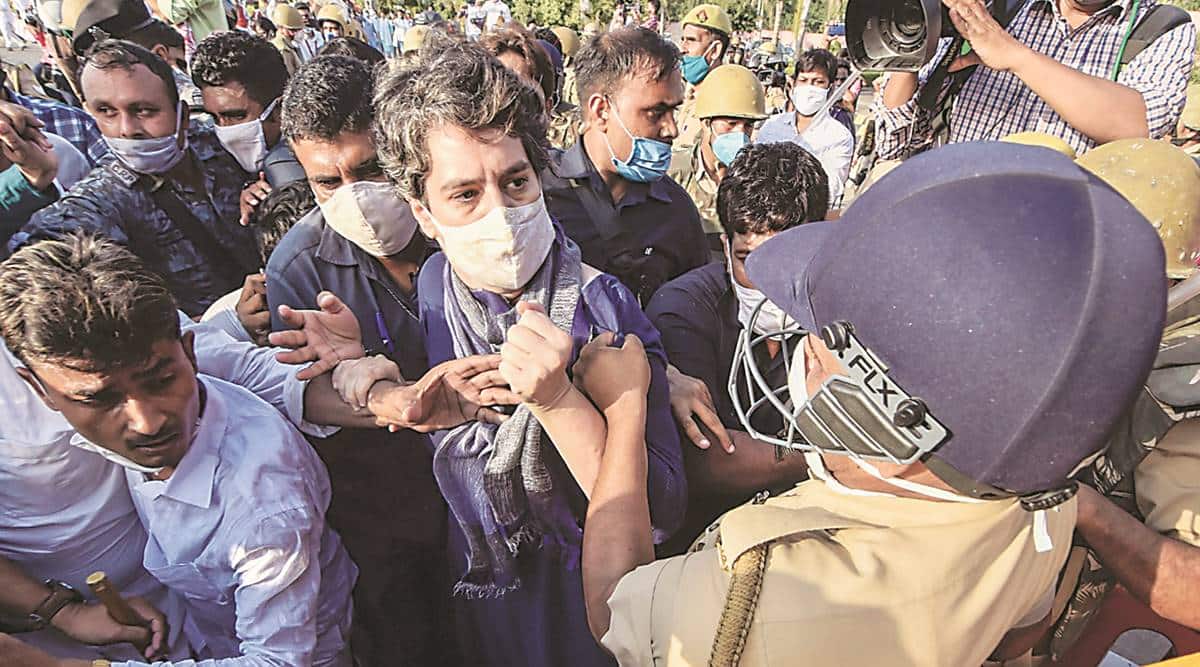 THE Uttar Pradesh government Saturday recommended a CBI investigation into the entire chain of events in the Hathras assault and alleged gangrape case, including her hurried cremation without the family’s presence.

The visit by the two officers followed lifting of the blockade around the village, imposed following the cremation of the 19-year-old around 3 am on Wednesday organised by the police. Asked about the cremation during his visit, DGP Awasthi told the media, “That’s why this action (the setting up of an SIT) has been taken.”

The family told The Sunday Express they will not take the polygraph and narco tests that the state government had said it would conduct on all those involved in the case, including the police officers investigating it.

Also Read | Looking for a 19-year-old

At a press conference that he and the DGP held after they had spent around half-an-hour with the family, Awanish Awasthi said, “The CM has constituted an SIT headed by senior officials and a woman officer. Statements by the family have already been taken by the investigating team. I assure you, every point raised by the family will be investigated by the SIT. Whoever the culprits are, strictest of action will be taken against them.”

The family asked why they had not been provided legal counsel so far. “We came to know that the lawyer of Nirbhaya (the 2012 Delhi gangrape victim) wanted to meet us, but the police didn’t let her come. How are we supposed to fight the four accused without legal counsel?” said her brother.

About the narco test, he said, “We want justice for our sister, but why should we undergo it? Do authorities usually force the victim’s family to take such tests?”

The family of the main accused, Sandeep, said they wanted the test to be conducted as soon as possible, “because we want the facts to come out”. “If they are guilty, punish them as you deem fit. But they should be given a chance, because we know what happened,” said a relative, Hariom.

The woman’s family said the DGP and Additional Chief Secretary had assured them of a fair investigation. “They said they will help us and the accused will be punished. When we complained about the hasty cremation and the police, they asked us to let the SIT submit its final report. They said a lot of senior police officers are looking into the case,” said the victim’s brother. The SIT, that has completed its initial round of questioning, has submitted a report to the UP government.

The family also reiterated that the district authorities had forced them to stay inside their home for two days, with around 50 policemen parked outside, and accused Hathras District Magistrate Praveen Kumar Laxkar of pressuring them to change their statements and threatening to confiscate their phones.

“On Thursday, the SIT team came to our house and questioned us for five to six hours. After they left, the DM sir came and scolded us. He abused my sisters and told us to change our statements. A video of this conversation was recorded by my cousin. When the video got out, the DM came again and threatened to confiscate our phones. He told us that he knows what we say to the media. We are scared that our phones are being tapped. We told him that we won’t give our phones to him,” said the woman’s elder brother (28).

Opinion | Tavleen Singh writes: Hathras is a mirror in which we see the flaws of Indian democracy

The woman’s sister-in-law said, “He (the DM) told us that we should be happy with the compensation the government has given us. He said the case will be disposed of after the media leaves.”

Speaking to the media on Friday, Laxkar had said, “I deny the negative rumours about my interactions with the family. I met with them twice and spoke to them about the case.”

Awanish Awasthi said police deployment would continue in the village. “We will take the support of public representatives in Hathras and everyone else involved to ensure harmony and peace,” he said.

Who am I? An oppressed Dalit, a suppressed woman?