Cyclone Yaas Live Tracking, Weather forecast Today Live News Updates: PM Modi held a review meeting with Odisha Chief Minister Naveen Patnaik in Bhubaneswar to discuss the impact of the cyclone. He also undertook an aerial survey of the parts of Odisha and West Bengal which have been impacted by the Cyclone Yaas. 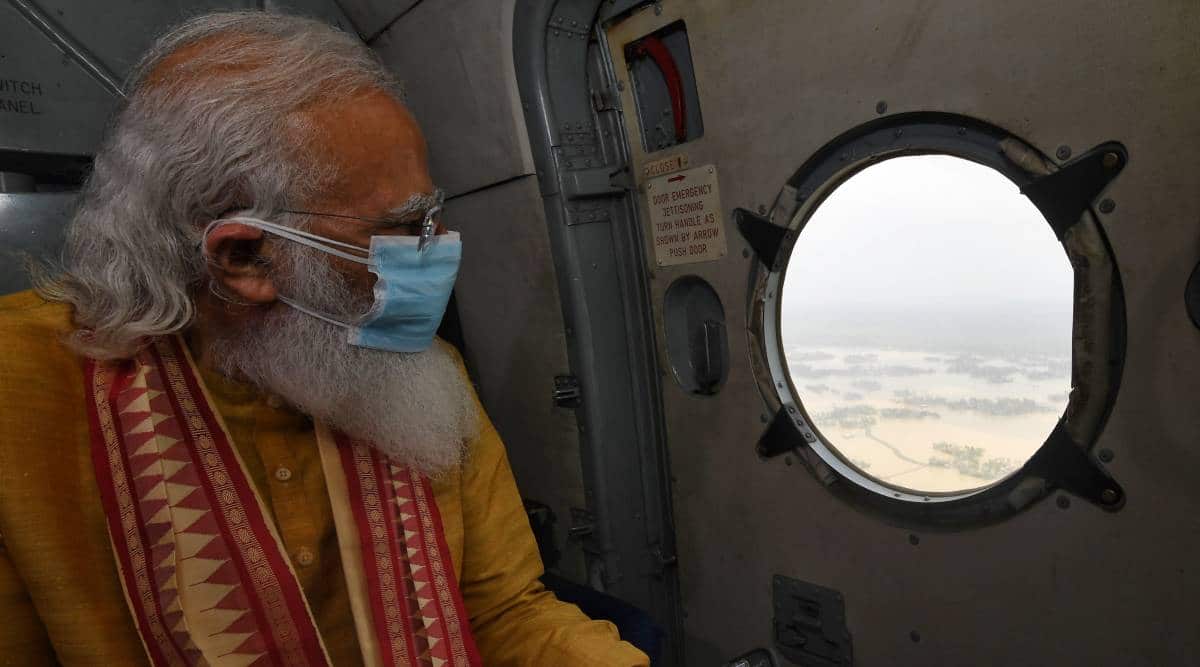 PM Modi announced financial assistance of Rs 1,000 crore for immediate relief activities. Of the total mount, Rs 500 crore would be immediately disbursed to Odisha. Another Rs 500 crore, announced for West Bengal and Jharkhand, will be released on the basis of the damage.

Banerjee conducted an aerial survey of cyclone-hit areas in North 24 Parganas district, officials said. Along with Chief Secretary Alapan Bandyopadhyay, Banerjee took stock of the situation in Hingalganj, Hasnabad, Sandeshkhali, Pinakha and other areas of the district, they said. “I have seen that most of the areas have been inundated. Houses and large tracts of agricultural fields are under water. A field survey will also be conducted,” Banerjee said.

Earlier in the day, PM Modi held a review meeting with Odisha Chief Minister Naveen Patnaik in Bhubaneswar to discuss the impact of the cyclone. He also undertook an aerial survey of the parts of Odisha and West Bengal which have been impacted by the Cyclone Yaas. During the meeting, Odisha government demanded long term solutions to mitigate problems caused by the repeated cyclones and provision of disaster resilient power systems. The state government however sought no immediate funds to tackle the expenditure incurred in disaster management, Odishas Special Relief Commissioner (SRC) P K Jena told reporters after the meeting.

West Bengal CM Mamata Banerjee is set to hold a review meeting with PM Modi today. Follow this space for the latest updates.

Cyclone Yaas left behind a trail of damaged homes and flooded farmland, forcing more than 21 lakh people to be evacuated to safe shelters in the states of West Bengal, Odisha and Jharkhand. 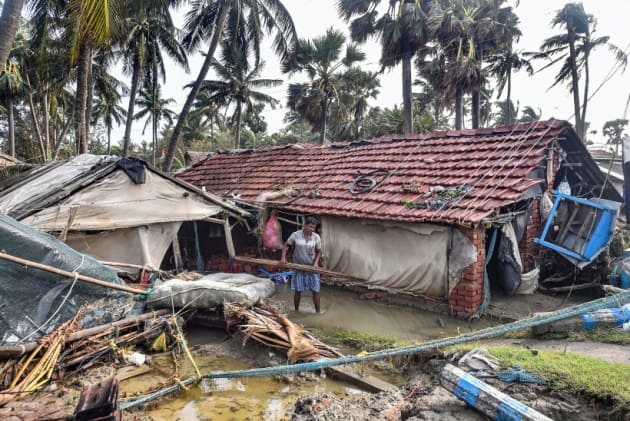 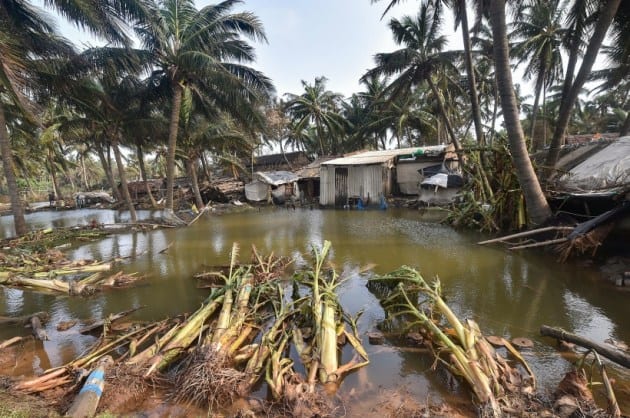 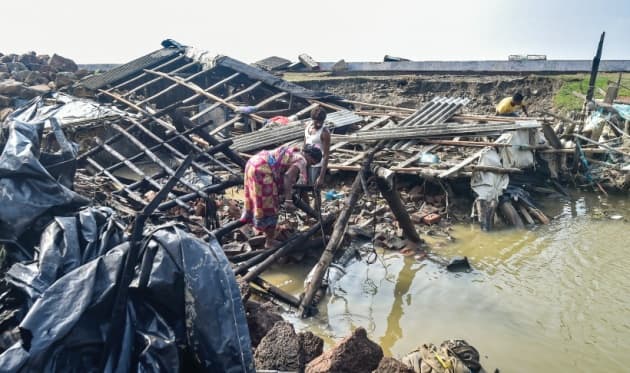 West Bengal Chief Minister Mamata Banerjee takes a stock of damages due to the landfall of Cyclone 'Yaas', in Digha, Friday. 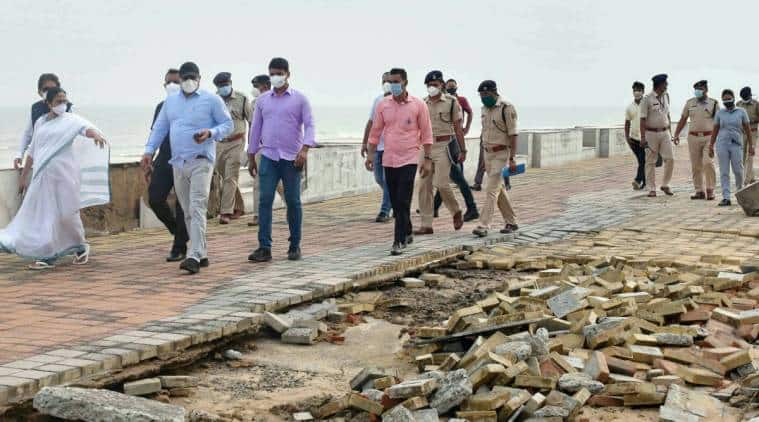 West Bengal Mamata Banerjee sought a Rs 20,000-crore package for redevelopment of the worst-affected areas. Modi flew down to Odisha earlier in the day to review the post-cyclone situation, and then made his way to Bengal, where the storm wreaked havoc in the coastal districts. The state has incurred a loss of Rs 20,000 crore due to the cyclone, Banerjee claimed. "We have sought a package of Rs 10,000 crore each for the redevelopment of Digha and the Sunderbans... It could well be that we might not get anything," she said following an administrative meeting held in the tourist town of Digha. --PTI

Prime Minister Narendra Modi announced financial assistance of Rs 1,000 crore for immediate relief activities. Rs 500 crore would be immediately given to Odisha. Another Rs 500 crore announced for West Bengal and Jharkhand, which will be released on the basis of the damage.

It would have served interests of state and its people for CM and officials @MamataOfficial to attend Review Meet by PM.

Non participation by CM and officials not in sync with constitutionalism or rule of law.

After having review meetings in Hingalganj & Sagar, I met the Hon’ble PM in Kalaikunda & apprised him regarding the post-cyclone situation in WB. The disaster report has been handed over for his perusal. I’ve proceeded now to review the relief & restoration work at Digha.

Prime Minister Narendra Modi undertook an aerial survey to review the situation in the wake of Cyclone Yaas. The aerial survey covered parts of Odisha and West Bengal.

PM @narendramodi undertook an aerial survey to review the situation in the wake of Cyclone Yaas.

Thunderstorms accompanied by lightning and light-moderate rain are expected in parts of West Bengal's South Dinajpur district, according to the Regional Meteorological Centre.

The review meeting which is currently underway in the airport conference hall, is expected to continue till mid-day. Cyclone Yaas, packing winds gusting to 145 kmph whiplashed parts of Indias eastern coast on Wednesday, killing at least four people and leaving behind a trail of damaged homes and flooded farmland, forcing more than 21 lakh people to be evacuated to safe shelters in the states of West Bengal, Odisha and Jharkhand. (PTI)

#WATCH | Trees uprooted and several houses damaged under the impact of Cyclone Yaas at a village in Purba Medinipur, West Bengal pic.twitter.com/ykDLU2JFEq

The depression over Bihar and Jharkhand, a remnant of the very severe Cyclone Yaas, has weakened into a well-marked low pressure area over Bihar and adjoining eastern Uttar Pradesh, according to the Indian Meteorological Department's latest bulletin.

Depression (Remnant of Very Severe Cyclonic Storm “YAAS”) over Bihar & adjoining Jharkhand has weakened into a well-marked low pressure area lay over Bihar adjoining East UP at 0530 hrs IST of today the 28th May 2021. pic.twitter.com/wD9pawJxEn

West Bengal Chief Minister Mamata Banerjee will meet Prime Minister Modi at Kalaikunda Air Force station on Friday to review the situation in the state after it was ravaged by Cyclone Yaas. Both PM Modi and Banerjee are set to conduct separate aerial surveys of affected regions later in the day.

Indian Navy teams continued to carry out relief operations in affected regions across Odisha. Here are some pictures:

As Cyclone Yaas made landfall in north Odisha around 10.30 am on Wednesday, strong winds and heavy tides lashed several coastal towns and villages on either sides of the Odisha-West Bengal border, inundating low-lying areas and uprooting trees, and claiming at least three lives — two in Odisha and one in West Bengal.

Odisha Chief Minister Naveen Patnaik conducted an aerial survey to assess the extent of damage in the state on Thursday. The cyclonic storm weakened into a deep depression over southern Jharkhand and adjoining Odisha, according to the Indian Meteorological Department (IMD). It is likely to move northwestward and gradually weaken into a depression later today, the IMD said.

Meanwhile, a spokesperson for UN Secretary General Antonio Guterres said the world body was ready to assist the country in its relief efforts if it needed help. "From South Asia, which is being impacted currently by Tropical Cyclone Yaas, our humanitarian colleagues tell us that we have activated cyclone preparedness measures and prepositioned stocks of food and other items," spokesperson Stephane Dujarric said. "The cyclone reached the Indian state of Odisha yesterday, with millions of people being evacuated by the Government ahead of the storm. UN agencies and our partners in India stand ready to support the response efforts if State authorities request it."