Cyclone Phethai Highlights: East Godavari district bore the brunt of the storm as it made landfall near Katrenikona, forcing the evacuation of 20,000 people, who have been sheltered in relief camps. 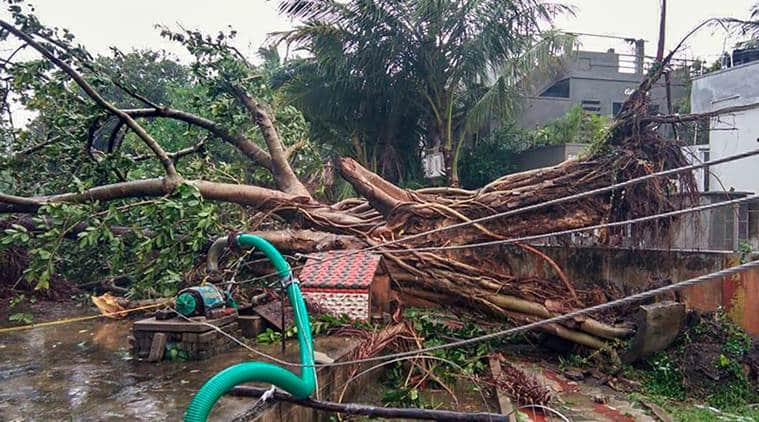 Cyclone Phethai Highlights: Coastal areas in Andhra Pradesh were battered with heavy rains Monday, leaving several trees and electric poles uprooted and claiming the life of one person. A boat carrying seven fishermen went missing in the Bay of Bengal off Visakhapatnam, even as Phethai crossed the coast in East Godavari district and moved towards Odisha, PTI reported.

Chief Minister N Chandrababu Naidu, who has been actively keeping a track of developments, was apprised of the situation during a review meeting late last night. The Indian Meteorological Department in a statement said that the Deep Depression over Coastal Andhra Pradesh moved nearly northwards with a speed of 11 kmph and gradually weakened into a depression.

Sixteen teams of Andhra Pradesh Disaster Response and Fire Services were deployed in and around Rajamahendravaram, while another nine (of five members each) have been in West Godavari district for road clearance. East Godavari district bore the brunt of the storm as it made landfall near Katrenikona, forcing the evacuation of 20,000 people, who have been sheltered in relief camps.

Andhra Pradesh CM on #CyclonePhethai: Electricity supply has been restored in 14 mandals. 187 camps have been set up, 32,000 people have been provided food. Mobile connectivity has been restored. East Godavari & Krishna administration brought situation under control within hrs. pic.twitter.com/wTn1hVQ0tN

Cotton crops affected, Damages yet to assessed in Odisha

Pravat Mohapatra, Joint Commissioner Relief on #CyclonePhethai: Cotton crops have been damaged, the damage will be assessed by the govt. Assistance will be provided to affected people. It may rain at a few places, otherwise, everything will be clear in a day or a two.#Odisha pic.twitter.com/P1qsNlPE9s

Crops in 14000 hectare of land damaged due to cyclone Phethai.

Andhra Pradesh: Visuals of the aftermath of the #Phethai cyclone from Dariyatipa Village, East Godavari district. Crops in 14000 hectares were damaged in the cyclone. pic.twitter.com/ZI52zhYSPl

"We shifted the people because it is dangerous staying in half-constructed houses during the calamity," the official said. Rainfall, accompanied by strong surface wind, lashed several parts of Malkangiri, Koraput, Gajapati, Ganjam, Rayagada and Kalahandi districts, the Met office said.

No casualty reported in Odisha so far

While inclement weather affected normal life in many parts of south and western Odisha, no casualty was reported, a senior official said, adding power supply was disrupted in some areas. As many as 11,600 people were evacuated in Gajapati district even as houses ravaged by Cyclone Titli in October are yet to be fully repaired, a senior official at the Special Relief Commissioner's (SRC) office said.

The India Meteorological Department (IMD) has forecast isolated heavy to very heavy rainfall in south Odisha and heavy rainfall in the western region till Wednesday as the cyclonic storm weakened gradually. "The depression over north coastal Andhra Pradesh moved in the north-north-east direction and weakened into a well marked low-pressure area and lay over north-west and adjoining west-central Bay of Bengal and Odisha Tuesday morning," Director of the Meteorological Centre here, H R Biswas said.

The Met department has forecast generally cloudy sky with a few spells of rain or thundershowers in the city till Wednesday morning.

Weather likely to improve from Wednesday morning in West bengal

The weather is likely to improve from Wednesday morning in West Bengal as the well-marked low-pressure will further weaken into a low-pressure system and move to the north-eastern states, where it will cause heavy rain at isolated places, the Met department said. The weatherman forecast light to moderate rain in most places of Gangetic West Bengal and in some places ofSub-Himalayan West Bengal.

Satellite imagery shows the cyclone weakening in its path is now over Odisha. The wind speeds have also come down and the cyclone has lost its intensity.

Strong winds in Odisha for next 12 hours

Strong wind speed reaching 30-40 kmph gusting to 50 kmph likely along and off Odisha coast and over northwest & adjoining west-central Bay of Bengal during next 12 hours.

Though the cyclone system has weakened, many districts in the southern region of the state have been experiencing heavy rainfall under its impact. As per the latest information from IMD, heavy to very heavy rainfall is likely in Malkangiri, Koraput, Gajapati and Rayagada districts. Besides, isolated places in Gajapati, Ganjam, Rayagada and Kalahandi districts may also experience heavy rainfall, the IMD said.

Odisha government has evacuated more than 11,000 people to safety zones. "We have evacuated about 11,600 people in Gajapati district as their houses are yet to be repaired after Cyclone Titli in October this year," a senior official at the Special Relief Commissioner's (SRC) office said. People from seven vulnerable blocks in Gajapati district have been taken to safe places.

The Depression over North Coastal Andhra Pradesh moved nearly north-northeastwards during past 06 hours, weakened into a well-marked low-pressure area and lay over Northwest & adjoining West-central Bay of Bengal and Odisha: IMD 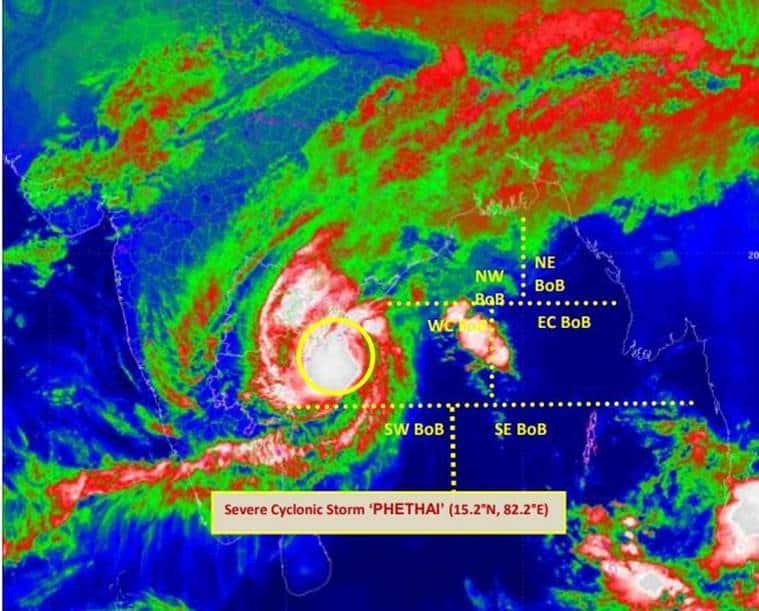 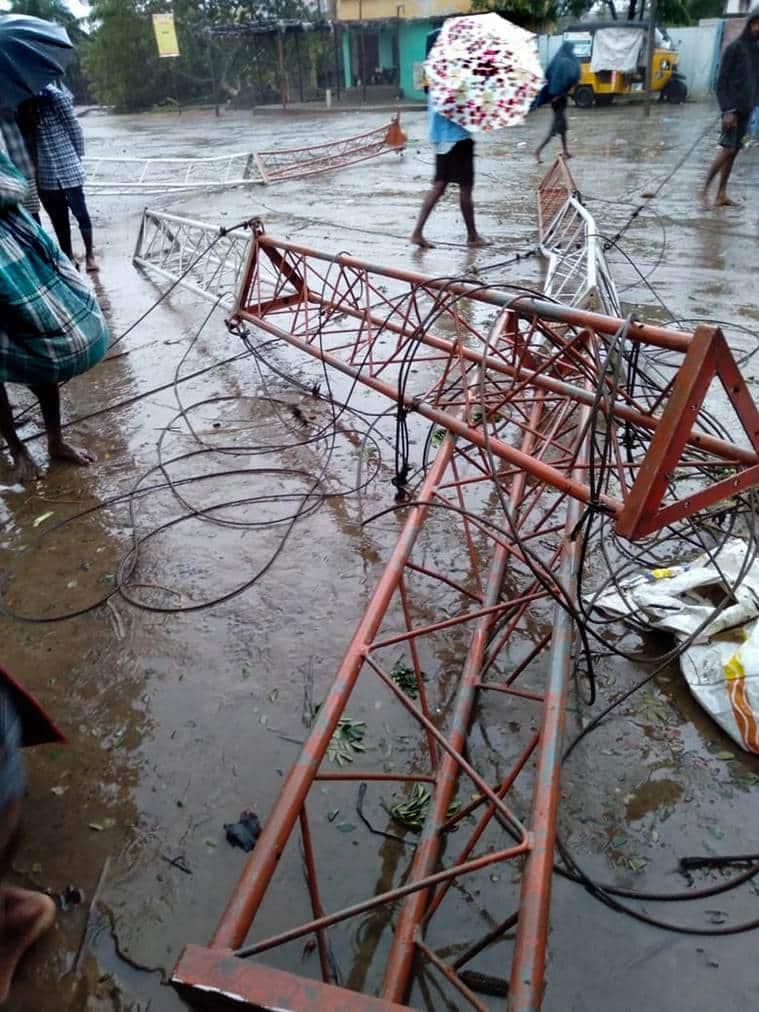 One dead in landslide due to cyclone

A man named R Durga Rao aged 28 was killed when a loosened soil hurtled down a hillock following heavy rains in Vijayawada city, according to sources in the state's disaster management Authority. Krishna district Collector B Lakshmi Kanthamannouncednan immediate relief of Rs 50,000 to the deceased family.

Naval Aircraft are standby at INS Dega to undertake Aerial survey with first opportunity of clear weather to assess the extent of destruction.

#IndianNavy dispatches ENC ships Jyoti & Shakti to Kakinada for #CyclonePhethai Rescue Ops with diving, medical teams & Humanitarian Assistance & Distress Relief (HADR) stores along with one UH3H helicopter is being sailed out from Visakhapatnam to Kakinada to join Rescue Op. pic.twitter.com/WY1xR7P68e

99.28% people were alerted about the cyclone: CM

As Cyclone Phethai made landfall, RTGS ensured that basic facilities were made available to citizens & immediate measures were taken towards any reported issues. According to feedback through IVRS calls, 99.28% people were alerted about the cyclone, 99.36% received food & water: CM Naidu

As #CyclonePhethai made landfall, RTGS ensured that basic facilities were made available to citizens & immediate measures were taken towards any reported issues. According to feedback through IVRS calls, 99.28% people were alerted about the cyclone, 99.36% received food & water. pic.twitter.com/PWB2SZDDO8

Held a review meeting to monitor the disaster management efforts by departments & last mile functionaries, at the RTG yesterday. All necessary measures have been taken to face #CyclonePhethai. The situation is fully under control, 100% restoration will be complete by today. pic.twitter.com/34h4VAfHAf

The deep depression over coastal Andhra Pradesh moved nearly northwards with a speed of 11 kmph during and weakened into a depression. It is very likely to move north-north-eastwards and further weaken into a well marked low pressure area, IMD said in a statement. 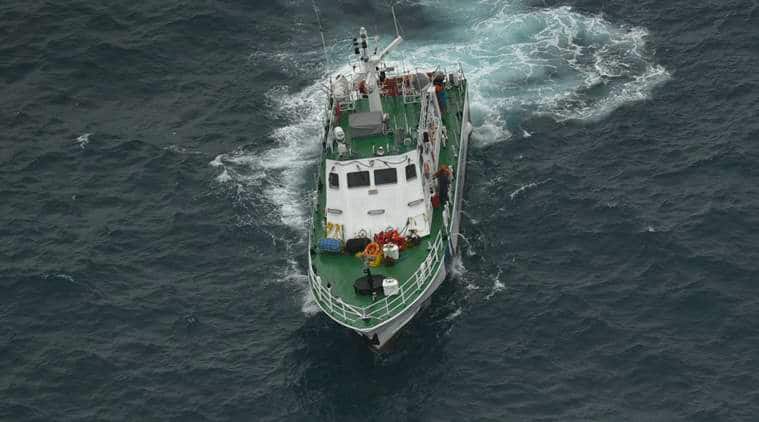 Indian Coast Guard has been put on alert. (AP Photo)

The sea would be rough to very rough in south Andhra Pradesh and north Tamil Nadu from Saturday till December 17, it said, adding that fishermen have been advised not to venture into the Bay of Bengal.