Cyclone Daye in Odisha HIGHLIGHTS: The cyclonic system moved west-northwestward and weakened into a deep depression laying about 65 km east-southeast of Titlagarh

As cyclonic storm ‘Daye’ made landfall in Odisha Friday morning, causing heavy rainfall in several parts of the state. Malkangiri district bore most of the brunt of the downpour. However, the cyclone turned into a deep depression, concentrated in the interiors of Odisha and Chhattisgarh, during the course of the day and is most likely to continue as a depression. The Meteorological Department has predicted it to weaken in the next 12 hours.

Director of Meteorological Centre in Bhubaneswar H R Biswas was quoted by PTI as saying that at least 150 people were rescued from several places in Malkangiri district and no loss of life has been reported yet.

The storm crossed south Odisha and adjoining Andhra Pradesh coast close to Gopalpur in the early hours of Friday, Director of Meteorological Centre in Bhubaneswar, H R Biswas said, according to PTI. The cyclonic system moved west-northwestward and weakened into a deep depression laying about 65 km east-southeast of Titlagarh.

Chief Minister Naveen Patnaik had held a review meeting on Thursday and asked the officials to closely monitor the situation and take appropriate steps to ensure no loss of life. An advisory has been issued by the cyclone warning division’s (CWD) saying that the sea will be very rough over central and north Bay of Bengal and off the coasts of Odisha, West Bengal and north Andhra Pradesh. A warning was also sent out to fishermen to not venture out into northwest Bay of Bengal and off Odisha, West Bengal and north Andhra Pradesh coasts in the next 24 hours.

Cyclone Daye in Odisha HIGHLIGHTS: Heavy rainfall in several parts of the state

Heavy rain expected in Vidarbha, Marathwada over the weekend: IMD

Vidarbha, Marathwada and central Maharashtra may receive heavy rainfall over the weekend, IMD scientists attributed cyclonic storm Daye as the reason for this forecast.

Latest visuals of flooding in Malkangiri

#Odisha: Heavy rainfall has led to a flood-like situation in Malkangiri district. (21.09.18) pic.twitter.com/b5KRwXGxqM

Deep Depression over Interior Odisha & adjoining Chhattisgarh, weakened into a Depression and lay centred at 1730 hrs IST of today, the 21st September, 2018 over northeast Vidarbha & neighbourhood near latitude 21.40N and longitude 80.20E, close to south of Gondia (Vidarbha). pic.twitter.com/pUrsNWvSqd 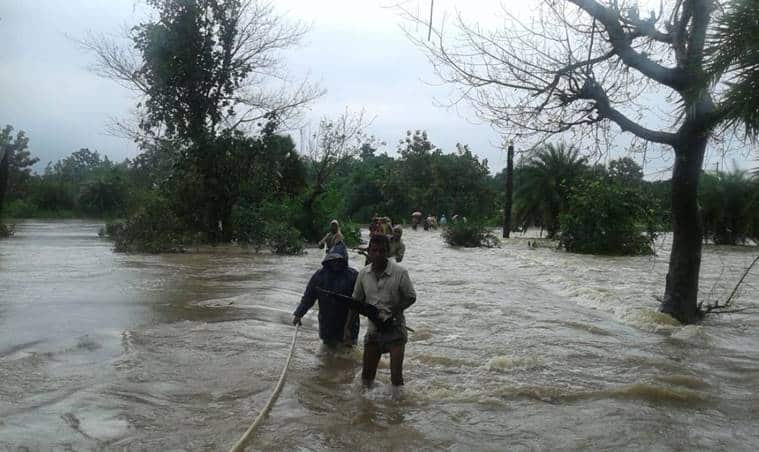 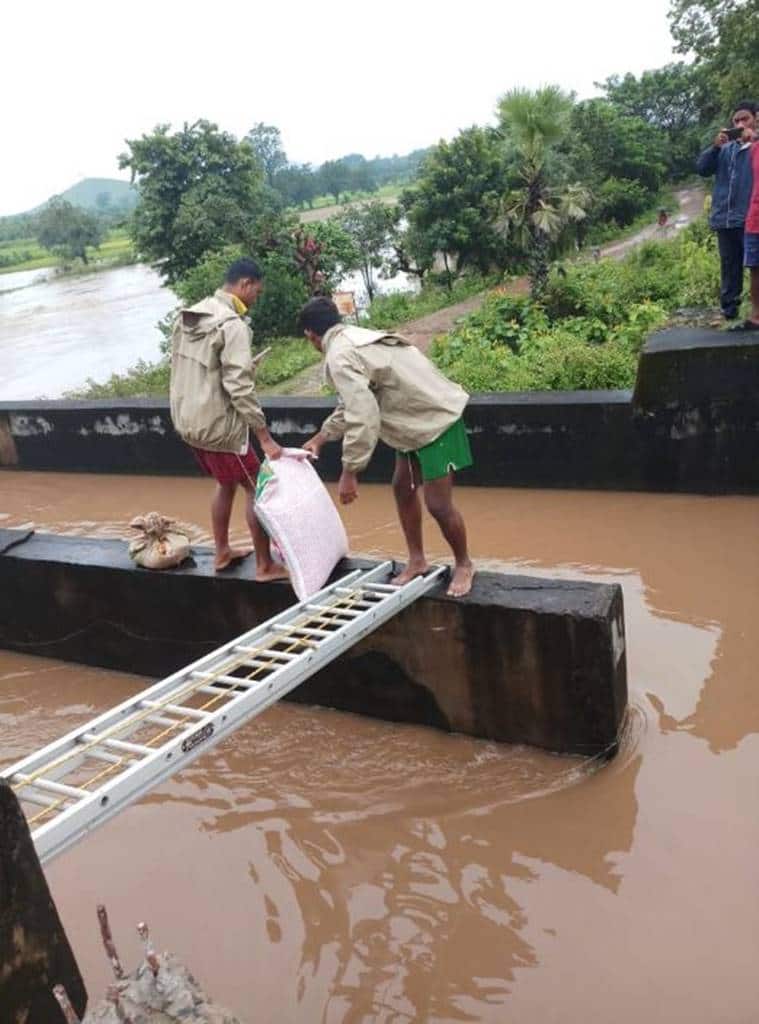 The cyclone will weaken in next 12 hours: Meteorological Dept

At present, the cyclone is continuing as a deep depression and in the next 12 hours, the cyclone will further weaken, says Raja Rao from the Meteorological Department, Hyderabad.

What has happened so far

In case you are joining us now, Cyclone Daye hit Odisha near Gopalpur early today causing heavy rainfall, especially in Malkangiri district. So far no loss of life has been reported and around 150 people have been rescued, said the Special Relief Commissioner (SRC).

Relief measures have been taken and Chief Minister Naveen Patnaik has directed the Malkangiri district administration to reach out to the affected people and extend all assistance to them, PTI reported.

At around noon, the cyclone weakened into a deep depression and has been gradually moving west-northwestwards and is centred over Chhattisgarh at present.

The cyclone is likely to continue to move west-northwestwards and weaken gradually into a depression during the next six hours, states a press release issued by the government. However, it also issues a warning of heavy to very heavy rainfall over Chhattisgarh and east Madhya Pradesh during the next 24 hours.

List of safe shelters and number of people evacuated released

The government of Odisha released a list of safe shelters located in 15 villages across the state along with number of people evacuated and kept in these shelters as on Thursday. 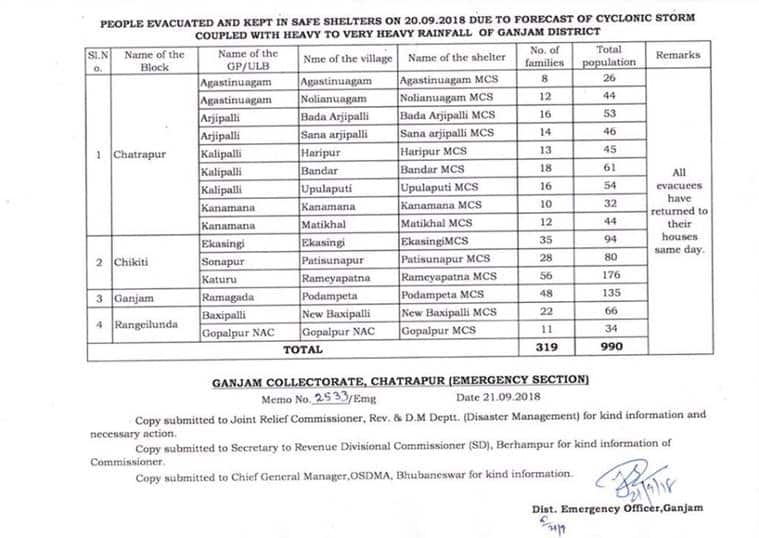 Malkangiri has recorded an average rainfall of 166.25 mm since Thursday

Malkangiri, which recorded an average rainfall of 166.25 mm since Thursday, witnessed severe waterlogging and disruption in road connectivity in many areas. Connectivity with Jeypore, Chhattisgarh and Andhra Pradesh remained snapped as all major roads have been submerged under water, said an official. Water level in the Balimela reservoir had also risen alarmingly, he said.

No loss of life has been reported so far: Special Relief Commissioner

No loss of life has been reported so far, Malkangiri district was severely affected by the cyclonic storm. Immediate steps have been taken for distribution of relief materials in the affected areas and damage caused by the natural calamity was being ascertained, said Special Relief Commissioner B P Sethi.

Cyclone Daye has weakened. There's deep depression positioned near Titlagarh. It's moving towards west, north-west. It'll have an impact in Odisha for the next 24 hours but there's less possibility of very heavy and extremely heavy rain.

Water level in all major rivers is below the danger level: Special Relief Commissioner of Odisha

Except for Malkangiri, the situation is normal in all other districts. The water level in all major rivers is below the danger level. People residing in low lying areas were evacuated last night and kept at shelters. No persons have been injured or dead. Malkangiri has received very heavy rainfall in last 24 hours, two villages and colonies have been affected, landslide in Chitrakonda area: Special Relief Commissioner of Odisha Bishnu Pada Sethi.

CM Naveen Patnaik reviewed the rain situation in Odisha's Malkangiri and sanctioned gratuitous relief of Rs 60 a day per person and Rs 45/per day for children below 12 for seven days. Officials in Malkangiri have been directed to reach out to the affected and provide all possible assistance.

Rain, thundershowers very likely at most places during next 24 hrs: IMD

Cyclonic storm 'Daye' will continue to move west-northwestwards and weaken gradually into depression during next 12 hours. Rain, thundershowers very likely to occur at most places during the next 24 hours. State of the sea will be rough over Odisha coasts during next 12 hours: IMD

Odisha: Two shutters of Upper Kolab dam in Koraput have been opened today following a rise in the water level. Cyclonic storm 'Daye' has caused rainfall in parts of the state. pic.twitter.com/AKOoahZRSl IMD's rain forecast for the next three days 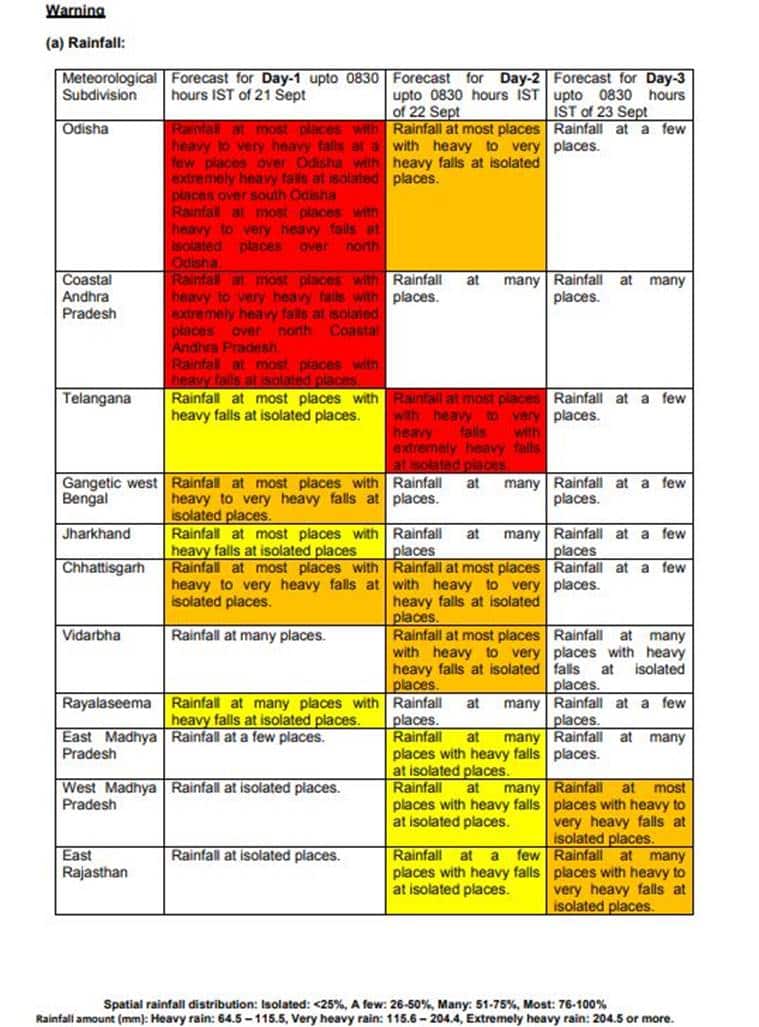 CM @Naveen_Odisha reviewed the cyclone preparedness as it is likely to make a landfall near Gopalpur. He directed concerned departments to remain prepared with adequate relief. Leaves have been cancelled in Ganjam, Gajapati, Khordha, Nayagarh & Puri pic.twitter.com/i1yNg26BXf

Cyclone Daye in Odisha HIGHLIGHTS: The Met Dept had issued the warning of a cyclone that is likely to hit the east coast of India. The weather department said a low pressure formed over the west-central Bay of Bengal on September 19 had intensified into a deep depression and was likely to transform into a cyclonic storm during the next 12 hours.