Cyclone Amphan HIGHLIGHTS: Odisha and West Bengal are on high alert, with a "massive evacuation" underway.

Cyclone Amphan: It is reportedly moving at a speed of 14 kmph. (Source: IMD)

Cyclon Amphan HIGHLIGHTS: Super Cyclone Amphan (pronounced UM-PUN) will weaken into an ‘Extremely Severe Cyclonic Storm’ within the next six hours, the India Meteorological Department (IMD) said. It is moving at a speed of 15 kmph towards the coasts of Odisha and West Bengal. At 8.30 am, it lay 480 km south of Odisha’s Paradip, 630 km south-southwest of Digha in West Bengal and 750 km south-southwest of Khepupara in Bangladesh. The storm is expected to make landfall along Digha in West Bengal by the evening of May 20.

Union Home Minister Amit Shah spoke to the chief ministers of West Bengal and Odisha, Mamata Banerjee and Naveen Patnaik respectively, and assured them of help, if needed.

The Indian government Monday said the cyclone had the potential to cause extensive damage like Cyclone Fani, which hit India at this time last year. Prime Minister Narendra Modi chaired a meeting on Monday to review the response preparedness and evacuation plan presented by the National Disaster Response Force (NDRF).

At least 25 NDRF teams have been deployed on the ground while 12 others are ready in reserve. An additional 24 teams are also on standby in different parts of the country. Apart from the NDRF, the Odisha Disaster Rapid Action Force (ODRAF) and Fire Services are in action too.

There at 37 teams of the NDRF currently in Odisha and West Bengal. Rescue teams of the Army, Navy, Air Force and Coast Guard are also only standby. Officials from the Department of Telecommunications and Ministry of Power have been deployed in the states to ensure essential services are maintained.

Cabinet Secretary Rajiv Gauba chaired a third meeting of the National Crisis Management Committee (NCMC) this afternoon to review the preparedness of agencies to deal with Super Cyclone Amphan. Gauba directed state authorities to ensure people in low lying areas were evacuated, and essential supplies were stocked up.

Cyclone Amphan is expected to make landfall on Wednesday, May 20. NDRF teams have been deployed to coastal areas of West Bengal to evacuate residents and help relief efforts. Watch our video from Kolkata:

Union Home Minister Amit Shah has spoken to both Bengal CM Mamata Banerjee and Odisha CM Naveen Patnaik, assuring them of help if needed. Shah reportedly took stock of the situation in both states, a day before Cyclone Amphan is expected to make landfall.

Last night, Cyclone Amphan was captured by Japan’s Himawari-8 satellite as it headed for India and Bangladesh. Here's a look at it:

Very severe #TropicalCyclone #Amphan was caught this morning by @JMA_kishou's #Himawari8 satellite as it headed toward India and Bangladesh. At last report, it was the equivalent of a Category 5 Atlantic hurricane.

The Tripura government has directed District Magistrates to be prepared to handle any high impact of Cyclone Amphan. Despite the fact that IMD has not issued a warning for Tripura, the state government said "there is no certainty of movement of exact path of the cyclone", reported news agency ANI.

Explained: Why it is important to name tropical cyclones

Adopting names for cyclones makes it easier for people to remember, as opposed to numbers and technical terms. Apart from the general public, it also helps the scientific community, the media, disaster managers etc. With a name, it is easy to identify individual cyclones, create awareness of its development, rapidly disseminate warnings to increased community preparedness and remove confusion where there are multiple cyclonic systems over a region. While picking names for tropical cyclones, there are rules that need to be followed.

Residents in coastal districts of Ganjam, Gajapati, Puri, Jagatsinghpur, Kendrapara, Bhadrak, Balasore, Mayurbhanj, Jaipur, Cuttack, Khurda and Nayagarh in Odisha have been asked to prepare for evacuation if necessary. The Center had Monday asked states to evacuate people from low lying areas in the cyclone path. Here are some pictures by news agency ANI from an evacuation centre in Odisha: The West Bengal government is evacuating residents along coastal areas to cyclone centres. On May 20, the storm is likely to impact East Medinipur, South & North Parganas, Hoqrah, Hooghly and Kolkata. Teams of NDRF have been deployed in these regions to carry out relief work. They are equipped with boats, tree cutters, telecom equipment etc. Rescue teams of the Army, Navy, Indian Air Force and Coast Guard are also on standby.

On Tuesday, coastal districts Medinipur, South and North 24 Parganas are likely to receive light to moderate rainfall at many places, and heavy falls at isolated places. In Odisha, very to very heavy rainfall is expected in Jagatsinghpur, Kendrapara, Jajpur, Balasore, Bhadrak and Mayurbhanj, while isolated heavy falls are expected in Khordha and Puri districts.

Super cyclone Amphan to make landfall on May 20

Super cyclone Amphan is expected to make a landfall along Digha and Hatiya islands in Bangladesh cutting through the Sundarbans in the afternoon or evening of Wednesday, May 20. At the time of landfall, it will remain an 'Extremely Severe Cyclonic Storm', with wind speeds ranging between 165-175 kmph to to 195 kmph.

Cyclone Amphan is only the second super cyclone to form in the North Indian Ocean after the Odisha super cyclone of 1999. There have been two or three super cyclones in the past. The government, which is evacuating coastal residents, has said Cyclone Amphan has the potential to cause extensive damage like Cyclone Fani, which hit India at this time last year. 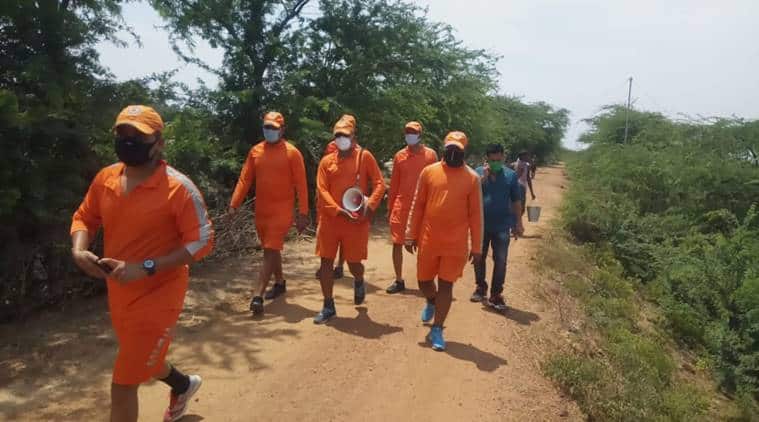 2nd super cyclone since 1999, could be like ‘Fani’ upon landfall, says NDRF

Cyclone Amphan, which turned into a "super cyclonic storm" on Monday and is expected to make landfall on May 20, is being taken seriously as this is only the second such severe cyclone that would hit India after 1999, NDRF chief S N Pradhan said. It has the potential to cause extensive damage like 'Fani' in the coastal districts of West Bengal when it finally makes the landfall on Wednesday, the government said.

To take a stock of the measures being taken to prevent major damage by the cyclone, Prime Minister Narendra Modi held a high-level meeting and reviewed the response preparedness and evacuation plan presented by NDRF, said PMO. During presentation by National Disaster Response Force, DG NDRF apprised the prime minister of the precautionary initiatives they took so far: 25 NDRF teams have been deployed on the ground while 12 others were ready in reserve. Additional 24 NDRF teams were also on standby in different parts of the country.

Cyclone 'Amphan' may cause extensive damage on Bengal coast during landfall: Govt

The coastal areas of the state are likely to experience light to moderate rainfall at many places with heavy falls at isolated places from Monday evening. The MeT department has issued an orange alert for West Bengal. As many as 17 teams of National Disaster Response Force have been deployed in the two states.

The storm turned 'extremely severe' over the Bay of Bengal at 2.30 am today, the Indian Meterological Department (IMD) had earlier said. Prime Minister Narendra Modi has held a high-level meeting and reviewed the response preparedness and evacuation plan presented by NDRF, said PMO.

"It is very likely to move north-northeastwards and move fast across northwest Bay of Bengal and cross West Bengal and Bangladesh coasts between Digha and Hatiya Islands during 09:00-12:00 pm of 20th May, 2020, as a very severe cyclonic storm," the latest bulletin released by the weather body read.

On Saturday, the National Crisis Management Committee (NCMC) reviewed the preparedness for the cyclone, which is likely to hit Odisha and West Bengal coast, and directed immediate assistance to the two states. A meeting of NCMC was held here to take stock of the preparation for the impending cyclone over the Bay of Bengal, an official statement said. Cabinet Secretary Rajiv Gauba took stock of the current situation and preparedness for rescue and relief operations and directed that immediate assistance, as required, be provided, it said.

Though the IMD is yet to make an exact forecast about the landfall of the cyclone, the administration has braced for the impending situation and accordingly, focused on the northern coastal districts of Jagatsinghpur, Kendrapara, Bhadrak and Balasore, Special Relief Commissioner (SRC), P K Jena said. "If required, evacuation of people will be undertaken in view of the situation," he was quoted as saying by PTI.