Caste equations, not crop prices, seem to hold sway when it comes to influencing electoral behaviour. 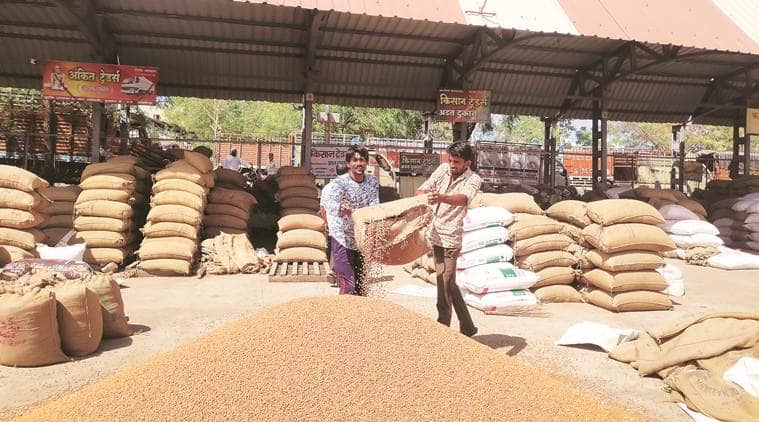 Chana is selling below MSP at Akola. (Express photo by Partha Sarathi Biswas)

Amidst all the hustle and bustle of elections, the only topic of conversation amongst Dahigaon’s residents is the price of chana (chickpea) and tur (pigeon-pea) at the wholesale APMC (agricultural produce market committee) mandi in Akola, just 16 km from their village.

“I sold my 18 quintals of chana early this month at Rs 3,800 per quintal. When I mentioned the government’s minimum support price (MSP) of Rs 4,620, the traders simply laughed and told me to forget getting that rate. Besides, I needed money to pay off my lenders,” sighs Suresh Mahadev Gawande, who had planted the legume crop on three out of his 13-acre holding.

The 31-year-old had earlier, in the second week of February, sold 45 quintals of tur from his remaining 10 acres at an average of Rs 4,500 per quintal, which was also below its MSP of Rs 5,675. “My total loss over the MSP comes to almost Rs 68,000. Nor do I qualify for PM-Kisan (the Narendra Modi government’s Pradhan Mantri Kisan Samman Nidhi scheme, which provides an annual payment of Rs 6,000 to farmers owning less than five acres). Why can’t the government give us MSP, instead of peanuts?,” asks this farmer, who “has no time for politics”.

Akola — along with Amravati, Yavatmal-Washim and Buldhana in the Vidarbha region, and Latur, Osmanabad, Beed, Jalna, Parbhani, Nanded and Hingoli in Marathwada — is part of Maharashtra’s main pulses belt. All these Lok Sabha constituencies, barring one, go to the polls on April 18, with only Yavatmal-Washim voting on April 11. Although the last date of filing nominations for both phases is over, a general lack of enthusiasm about the elections is clearly palpable.

For farmers here, the last two seasons has been bad in terms of prices. Last year, Gawande’s average realisation from his 10 quintals of chana was Rs 3,700-3,800 per quintal. It was worse in tur, where his 50 quintals, sold between December 2017 and January 2018, fetched between Rs 3,700 and Rs 3,900. Vidarbha, unlike Marathwada and North Maharashtra, had decent monsoon rains in 2017 and 2018, resulting in good yields for tur, chana and even soyabean. But prices, except in soyabean’s case, haven’t been anywhere close to MSPs. 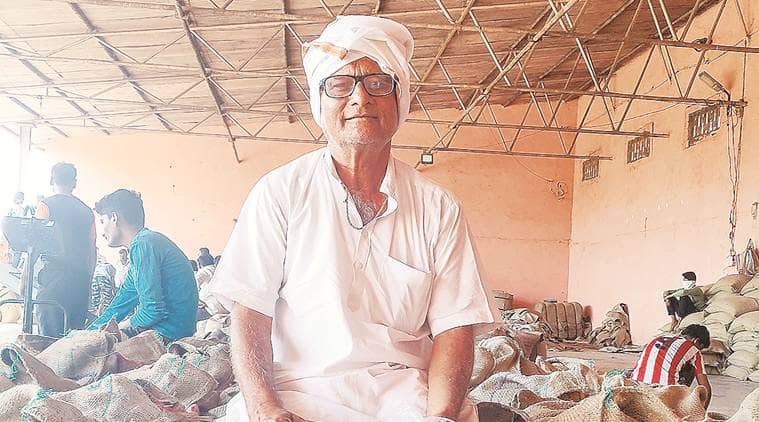 Madhu Patil has sold his tur at the government procurement center, but is yet to receive his payment. (Express photo by Partha Sarathi Biswas)

Madhu Patil harvested 140 quintals of soyabean in November, which he had to sell at Rs 3,300/quintal. “Prices rose beyond the MSP of Rs 3,399 by December and even hit Rs 3,700 levels at the Akola market in February. But I had some immediate payment commitments and was forced to sell my crop at Rs 3,300,” says this 65-year-old farmer from Morgaon Kakad village in Akola district’s Barshitakli taluka. He, like many in this region, grows tur mostly as an inter-crop between rows of soyabean. Soyabean is harvested first towards end-October, with tur following after mid-January.

Patil has this time sold 50 quintals out of his 120-quintals tur produce to the Vidarbha Cooperative Marketing Federation’s procurement centre at Akola, but is yet to receive the MSP payment for it even after 50 days. The remaining 70 quintals he is yet to sell, while waiting — rather, hoping — for open market prices to improve to near-MSP levels. On Wednesday, tur prices averaged Rs 5,050 per quintal at the Akola APMC mandi. Gawande, on his part, did not even try to sell his tur to a government procurement centre. “What is the point if the payment, even if it is at MSP, comes late? I know farmers who have not been paid even for last year’s tur,” he claims.

Practically all farmers in this region blame the government — both at the Centre and the state — for their plight. “Why did they continue to allow imports, when we had a bumper crop on our fields?”, fumes Patil, who sold his tur at an average price of Rs 4,300 per quintal in February 2018. He also dismisses the Modi government’s hike in the MSP for tur from Rs 5,050 to Rs 5,625/quintal since 2016-17, and that of chana from Rs 4,000 to Rs 4,620/quintal, as “measures on paper”. It is one thing to announce and another to ensure procurement and payment on time, he adds.

Both Patil and Gawande are critical of the PM-Kisan scheme announced in the Modi government’s Interim Budget for 2019-20. “First of all, you pay just Rs 6,000 in three installments and, then, limit it to just those owning up to five acres. Most farmers in Vidarbha and Marathwada have more land, but it is largely un-irrigated. And do we look like rich farmers?,” states Gawande. In Dahigaon village itself, only 156 out of the 879 landowning farmers are eligible for the payout. “The sum is a pittance. Even if somebody were to qualify, the cost of submitting the application along with photocopies of documents and travelling to Akola will be more than Rs 200,” observes Gopal Diwakar Gawande, who cultivates 8 acres.

What is interesting, though, is that none of these issues seem to matter when it comes to influencing electoral behaviour.

Most of Dahigaon’s farmers appear inclined to vote Sanjay Shamrao Dhotre, the sitting Bharatiya Janata Party (BJP) Member of Parliament from Akola, who is seeking a fourth term. Part of it has to do with Akola being a district, where the BJP exercises strong control over the local cooperative institutions. That includes the Akola District Cooperative Bank and also the APMC. Dhotre being a Maratha — the community to which most farmers here belong — also helps.

Dhotre’s main opponent is the Congress’ Hidayatulla Patel, whom the former had defeated by 2.03 lakh votes in the 2014 Lok Sabha elections. At that time, Prakash Ambedkar, leader of the Bharipa Bahujan Mahasangh that claims to represents the interests of the Dalit community, had garnered 2.39 lakh votes. Ambedkar is set to play spoiler again, having already filed his nomination in addition to contesting from the Solapur constituency.

Santosh Dhakare, a BJP member of the Akola Block Panchayat Samitee, admits that the condition of farmers has deteriorated in the last four years. A three-acre farmer, he is still “waiting” for wavier of his Rs 24,000 crop loan under the Devendra Fadnavis-led state government’s scheme announced in early 2017. Dhakare also had to sell his soyabean in November at Rs 3,350 per quintal. He is currently holding on to his tur crop in the expectation of better realisations.

At the end of the day, it is caste equations, not prices of soyabean and pulses, which might be the decider. The Opposition’s strategy, too, for now looks focused more on consolidation of the Muslim and Dalit vote, than harvesting farmer anger.