CLOSE TO 50,000 Covid patients in India are currently in intensive care units, while more than 14,500 are on ventilator support, according to Government data released on Saturday. 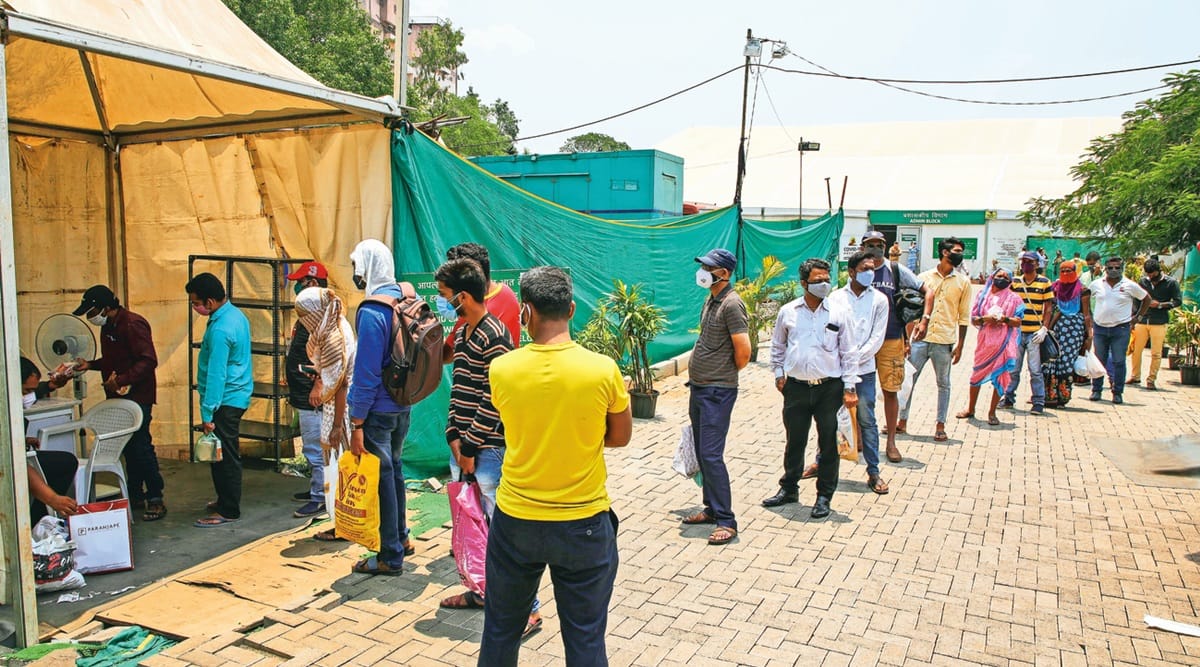 Relatives of patients admitted in a ‘jumbo’ Covid facility in Pune line up to deliver essentials on Saturday. (Photo: Ashish Kale)

CLOSE TO 50,000 Covid patients in India are currently in intensive care units, while more than 14,500 are on ventilator support, according to Government data released on Saturday.

Also, more than 1.37 lakh patients are currently on oxygen support, a Government statement said. This is the first time that the Government has released nation-wide data on Covid patients requiring critical care, and it shows how serious the second wave of infections has been, compared to the first wave last year.

At the peak of the first wave in September, about 23,000 patients were in ICUs, less than 4,000 of them were on ventilators, and around 40,000 required oxygen support, documents accessed by The Indian Express show.

Special Story |One day in a Covid ICU

The latest numbers were shared by Union Health Minister Harsh Vardhan at the 25th meeting of the ‘high-level’ Group of Ministers on Covid that was conducted through video-conferencing on Saturday.

The active caseload in the country has grown by 3.65 times between the peak of the first wave, 10.17 lakh, and now. The number of people in ICUs are only slightly more than two times the number on September 18 last year, documents with The Indian Express show.

The data shows that while the absolute number of people requiring critical care support during the second has increased significantly, the increase is commensurate to the rise in the active caseload during this period.

The shortage of oxygen cylinders, hospital beds and ICUs, thus, seem to be precipitated by the overwhelming numbers, and not because the virus has been causing more severe disease during the second wave as compared to the first.

The Government statement also gave figures for the total number of people who had been admitted to ICUs, and required ventilator support, since the beginning of the epidemic in the country.

More than 2.18 crore people have been found infected with the virus in India till now. The Government figures, therefore, suggest that 2.23 per cent of all people infected so far have been admitted to an ICU, about 0.78 per cent have been put on ventilators, and 4.12 per cent have required oxygen support.

It also means that close to 93 per cent of infected people have recovered from the disease without needing any critical care support.

The Health Minister also told the GoM that a total of 53.25 lakh doses of Covid vaccines are “in the pipeline and will be supplied to the states soon”, the statement said.

Dr Sujeet Kumar Singh, Director, National Centre for Disease Control (NCDC), who also participated in the meeting, underscored the need and importance of significantly ramping up testing and hospital infrastructure in Tier-II/III cities in view of the surge in cases.