Omicron Covid-19 India Latest Update: The cumulative doses administered in the country so far under the nationwide COVID-19 vaccination drive has exceeded 133.17 crore.

Earlier in the day, four new Omicron cases were also detected in Delhi, taking the tally in the national capital to six. Delhi Health Minister Satyendra Jain said that of the six cases, one has been discharged from hospital. Officials said that all six are stable and have mild to moderate symptoms.

Omicron spreading at unprecedented rate: WHO

The World Health Organisation Tuesday said that the Omicron variant of coronavirus is spreading at an "unprecedented rate" and is "probably in most countries".

WHO Director-General Tedros Adhanom also said that evolving evidence suggests a small decline in efficacy of Covid-19 vaccines in protecting against severe disease and deaths and that boosters can play an important role in the coming days.

"We’re concerned that people are dismissing Omicron as mild. Surely, we have learned by now that we underestimate this virus at our peril. Even if Omicron does cause less severe disease, the sheer number of cases could once again overwhelm unprepared health systems"-@DrTedros

The company also said full results of its 2,250-person study confirmed the pill’s promising early results against the virus: The drug reduced combined hospitalizations and deaths by about 89 per cent among high-risk adults when taken shortly after initial COVID-19 symptoms.

Separate laboratory testing shows the drug retains its potency against the omicron variant, the company announced, as many experts had predicted. Pfizer tested the antiviral drug against a man-made version of a key protein that omicron uses to reproduce itself. More details here. 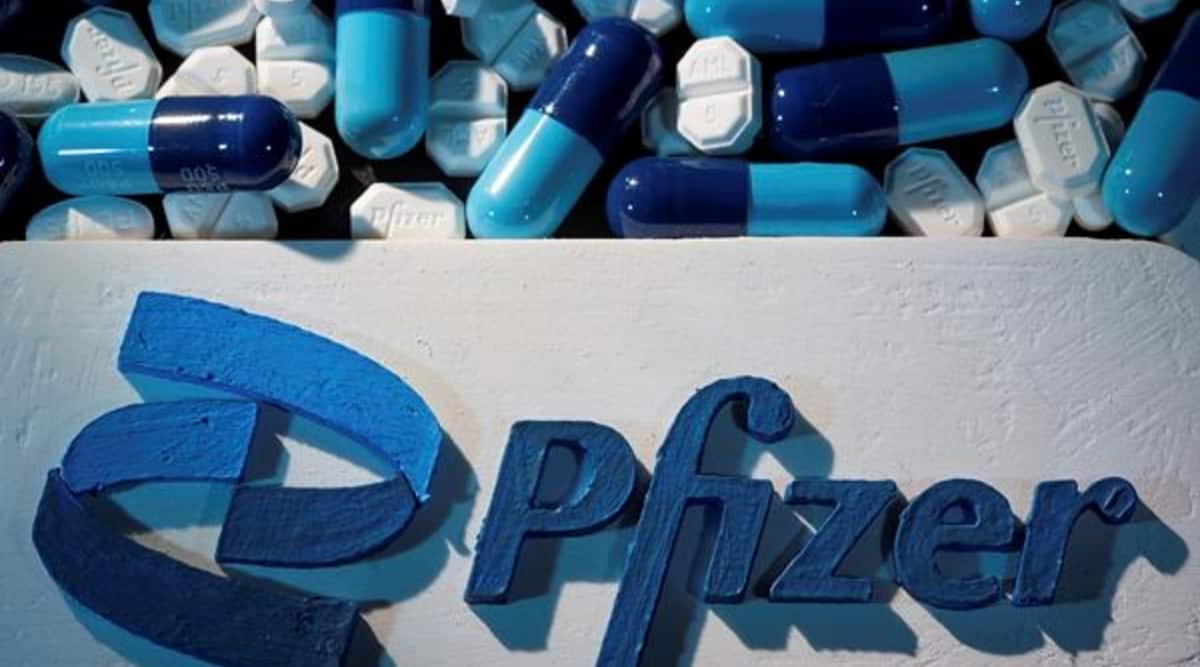 Eight new cases of the Omicron variant of coronavirus were detected in Maharashtra, including 7 in Mumbai on Tuesday. According to the health department, none of the patients had a history of international travel as per preliminary info.

Schools for classes 1 to 7 will reopen in Mumbai on Wednesday, over 20 months after they were shut for physical classes due to the outbreak of the pandemic and imposition of restrictions. The order to reopen the schools was issued by Brihanmumbai Municipal Corporation (BMC) commissioner Iqbal Singh Chahal on Tuesday. More details here. 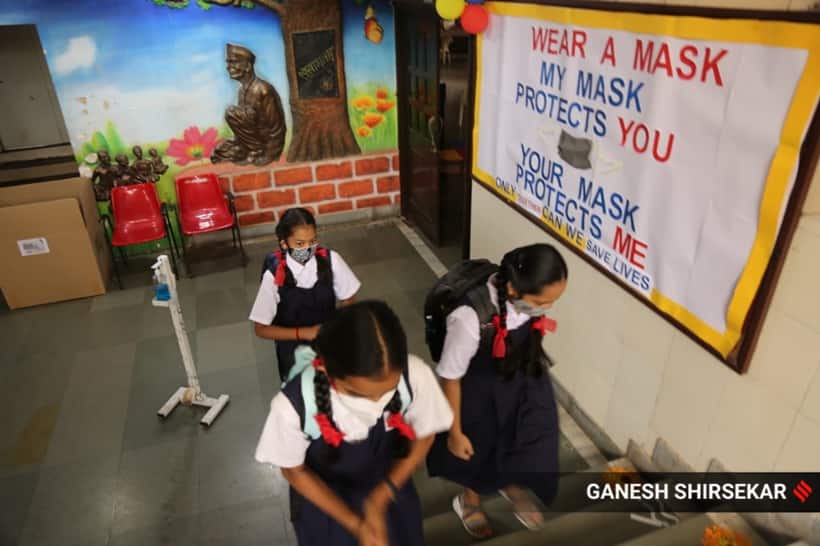 Lok Sabha members on Tuesday cautioned the Modi government on the challenges posed by the rising cases of Omicron variant of Covid-19 and asked it to spell out plans for administering a booster dose of vaccination.

Raising the issue in the Lok Sabha, Congress leader Adhir Ranjan Chowdhury said India has already reported 41 cases of Omicron variant and the government should begin preparations of every kind to deal with the challenge.

Chowdhury also wanted the government to spell out its plans for vaccination of children and adolescents, noting that European Union nations have already started giving jabs to children. (PTI)

Over 55 per cent of India's adult population fully vaccinated

Union Health Minister on Tuesday tweeted that over 55 per cent of India's eligible adult population has been fully vaccinated against Covid-19.

According to Health Ministry officials, 55.52 per cent of the eligible population has been fully vaccinated with 87 per cent people receiving the first dose of the vaccine, PTI reported.

With over 55% of the eligible population fully vaccinated now, 🇮🇳 has achieved another milestone in its fight against #COVID19 💉

Raising the issue in the Lok Sabha, Congress leader Adhir Ranjan Chowdhury said India has already reported 41 cases of Omicron variant and the government should begin preparations of every kind to deal with the challenge.

Chowdhury also wanted the government to spell out its plans for vaccination of children and adolescents, noting that European Union nations have already started giving jabs to children.

Trinamool Congress member Saugata Roy wanted the government to start administering booster doses immediately. "Booster doses for Covid-19 should be started. Because of some differences within the expert committee, booster dose is not being given," Roy said. He added that British Prime Minister Boris Johnson has already declared Omicron as an emergency and cases were on the rise in London. (PTI)

Serum Institute of India (SII) plans to launch a Covid vaccine for children in the next six months, the company's CEO Adar Poonawalla said on Tuesday. Participating in an industry conference, Poonawalla said the vaccine 'Covovax' is under trial and would offer protection to children all the way down till three years. (PTI)

G20 events to be held across India, says S Jaishankar
Legislature, executive, judiciary need to have ‘one thinking’: Pres...
UP: Man killed in ‘celebratory firing’, BJP leader held
Conversion of Supreme Court into small causal court must stop: R Venkatar...
‘Spirit of the Constitution is the spirit of India’, says PM Modi on Cons...
More from India >>
Chennai: 7 of family, including traveller from Nigeria, admitted to King Institute

Tamil Nadu Health Minister Ma Subramanian told reporters that during the test it was found that the 47-year-old man, who tested positive for Covid-19 after travelling from Nigeria to Chennai via Doha, had S-gene drop indicating Omicron variant. However, the presence of the variant is yet to be confirmed by genome sequencing.

"Though he was asymptomatic he and his six close contacts - mostly relatives - were admitted to the government facility at the King Institute, Guindy, for treatment," he said. Their samples have been sent to Bengaluru lab for whole genome sequencing.

Health Minister Subramanian says a total of seven members of the family have tested +ve. They are asymptomatic, admitted to the King Institute in Chennai.

A 47-year-old man, who reached Chennai from Nigeria via Doha, has tested positive for Covid-19. His five family members have also tested positive. Their samples have been sent for genome sequencing to ascertain the presence of Omicron variant.

A 47-year-old man who reached Chennai from Nigeria via Doha has tested +ve for #Covid19. His five family members have also tested positive. S-gene drop noticed in their RT-PCR test. Samples have been sent to Instem lab to check for the presence of #OmicronVirus. @IndianExpress

A yet to be peer-reviewed study by the researchers from the University of Oxford showed that two doses of Pfizer and AstraZeneca Covid-19 vaccines generate lower levels of antibodies against the Omicron variant of coronavirus, suggesting that those previously infected or vaccinated may be at an increased risk of infection. The researchers, however, noted that there is currently no evidence of increased potential to cause severe disease, hospitalisations or deaths in vaccinated populations.

"Importantly, we have not yet assessed the impact of a 'third dose' booster, which we know significantly increases antibody concentrations, and it is likely that this will lead to improved potency against the Omicron variant," said Matthew Snape, a professor at the University of Oxford and co-author of the study.

"Real-world effectiveness data has shown us that vaccines continue to protect against severe disease with previous variants of concern. The best way to protect us going forward in this pandemic is by getting vaccines in arms," said Teresa Lambe, a professor at the University of Oxford, and an author on the paper. (PTI)

All Omicron patients in Delhi stable with mild symptoms: Officials

Delhi health minister Satyendar Jain said that all six patients -- four of whom were reported on Tuesday -- tested positive at the Delhi airport and were sent to Lok Nayak Hospital, where their samples were sent for genome testing.

Officials said that all six are stable and have mild to moderate symptoms. read more

Appropriateness or necessity of Covid-19 booster dose yet to be decided: Centre to Delhi HC

The Centre on Monday told the Delhi High Court that the National Technical Advisory Group on Immunization (NTAGI) and National Expert Group on Vaccine Administration for Covid-19 (NEGVAC) are deliberating and considering scientific evidences related to dose schedule of Covid-19 vaccines as well as the need and justification of booster doses.

The current priority of National Covid-19 Vaccination Program is to cover the entire eligible population with full vaccination and at present there are no guidelines regarding administration of booster doses from the two expert bodies, it added. Read more

Director of Health in the Andhra Pradesh government stated that an international traveller from Ireland, who had tested positive for the Omicron variant on December 11, has tested negative for Covid-19 after 14 days. "He is under home quarantine. All his contacts have tested negative," the director was quoted as saying by ANI.

The patient had arrived in India on November 27.

Delhi's first patient of the Omicron variant of the coronavirus, a 37-year-old man, has been discharged from the Lok Nayak Jai Prakash Narayan (LNJP) hospital, officials said on Tuesday.

The man, a resident of Ranchi, had travelled from Tanzania to Doha and from there, to Delhi on a Qatar Airways flight on December 2. He stayed in Johannesburg in South Africa for a week and had mild symptoms. (PTI)

Amidst news of the death of one person infected with the Omicron variant of coronavirus, there has been a rush to get vaccine booster doses in the United Kingdom, with more than half a million people booking their slots on Monday. The United Kingdom had, on Sunday, announced that booster doses would be made available to everyone above the age of 18 years.

UK Prime Minister Boris Johnson confirmed the death of one person infected with Omicron variant. It was not immediately clear whether the infection happened to be the cause of death or was incidental.

Meanwhile, Norway tightened restrictions on movement of people amidst record high number of coronavirus infections in the last few days, powered by the spread of the Omicron variant. Read more

Bengaluru: 4 held for helping SA traveller fly back from India

The 66-year-old, who works for a pharmaceutical firm, tested positive on arrival on November 20. He was supposed to be quarantined at the Shangri La Hotel for 14 days, but left for South Africa on November 27 after showing a Covid-negative report.

His samples were later found to be infected with the Omicron variant on December 2.

India's daily Covid positivity rate was recorded at 0.58 per cent. It has been less than two per cent for the last 71 days, PTI reported.

The weekly positivity rate was recorded at 0.68 per cent. It has been below one per cent for the last 30 days, according to the health ministry.

Actor Arjun Sarja has tested positive for Covid-19. Sharing the news on Instagram, the actor stated that he is doing well and has isolated himself. Sarja has worked predominantly in Tamil films and was also seen in Harbhajan Singh-starrer Friendship (2021).

Gujarat has reported 58 new Covid-19 cases and a death in Valsad on a day when it registered its fourth case of the Omicron variant on Monday. A health official at the Surat Municipal Corporation (SMC) has confirmed the sample of a 42-year old man, who returned from South Africa earlier this month, returned positive for the variant Monday.

Earlier, Jamnagar had reported the first three cases of the newly discovered variant in the state as a Zimbabwe-based NRI and his wife who were visiting the city and his brother-in-law who received them tested positive.

More than a month after Panchkula last reported a death due to Covid-19, a 67-year-old man, resident of village Dhamala, who had been suffering from diabetes, hypertension, heart disease and kidney disease, succumbed to the virus on Monday.

This addition to the death tally raises concerns as the Covid-19 cases continue to rise, with positivity percentage crossing 0.1 percent after a gap of several months. The positivity rate on Monday stood at 0.6 percent.