Adhering to the social distancing guidelines, Dahi Handi mandals were not forming human pyramids this year to mark the birth of Lord Krishna. 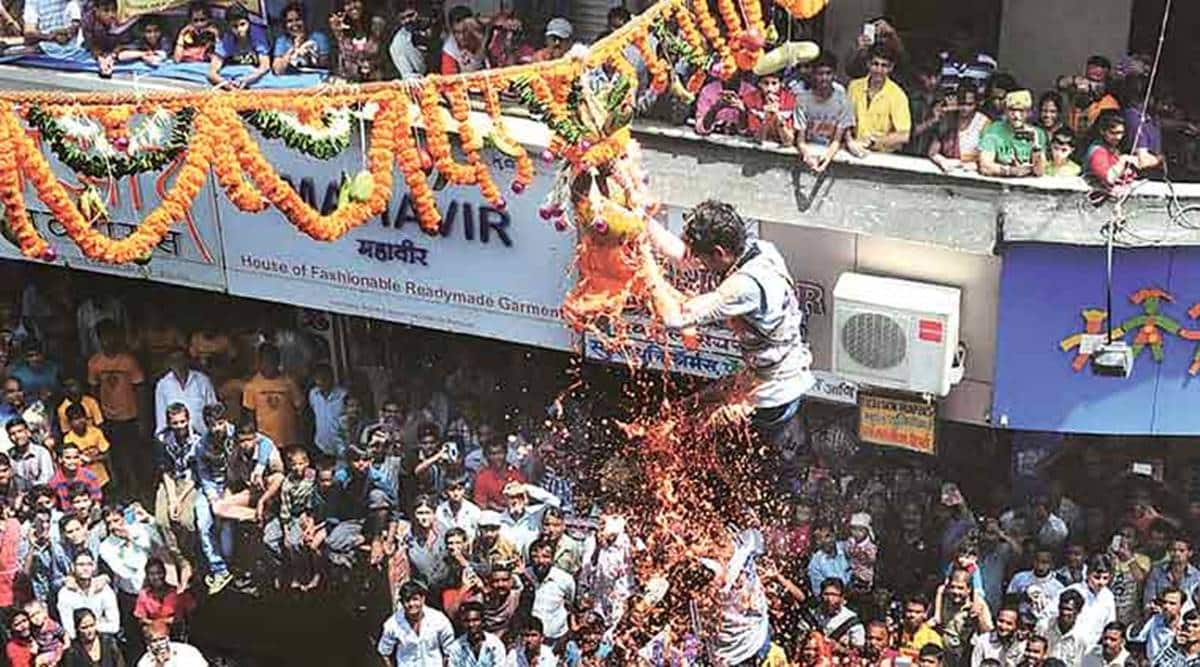 The BJP has decided to organise a ‘dahi handi’ event at the iconic Jamboree Maidan in Worli. (File Representational Photo)

The grim shadow of COVID-19 crisis was visible on Dahi Handi festivities in Mumbai and other parts of Maharashtra on Wednesday as mandals opted for low-key celebration unlike past years which provided for public spectacles by ebullient Govinda squads.

Adhering to the social distancing guidelines, Dahi Handi mandals were not forming human pyramids this year to mark the birth of Lord Krishna. Instead, they were carrying out health and social welfare drives, like blood donation camps and removal of plastic.

In previous years, Dahi Handi used to be celebrated with great fervour in parts of Maharashtra, particularly in Mumbai and neighbouring Thane, where religious institutions, political leaders, and Govinda mandals, comprising youngsters dressed in colourful attire, took part in the festivities.

Various social groups also used to organise programmes and cash rewards were given to the groups which succeeded in making the multi-tier human pyramids and breaking the dahi handis, earthen pitchers containing curd or buttermilk, tied at a height with rope.

But this year, dahi handis were being broken in a symbolic manner with those involved maintaining social distance and wearing masks.

“Ours was the biggest Dahi Handi celebration in India in normal times. But this year, we celebrated in a very simple manner, observing social distancing given the COVID-19 crisis. No human pyramid was formed. A child climbed atop a table and broke Dahi Handi to mark the festival in a symbolic manner,” Kadam said.

“This year, we gave a message of boycotting Chinese products and working for an aatmanirbhar (self-reliant) India,” he said.

Bala Padalkar, chief of Dahi Handi Utsav Samanvay Samiti, an umbrella body of over 950 mandals (groups) in the state, told PTI that the enthusiasm was not the same this year and members of various mandals agreed not to travel in the city to break dahi handis.

Instead, they performed puja in their own areas without forming human pyramids, he said.

Considering the crisis situation and the brave fight put up by COVID-19 warriors, various mandals undertook health and social welfare initiatives, including blood donation camps, to mark the festival, he added.

Sandeep Dhawale, coach of the city-based Jai Jawan Govinda Pathak (squad), known for forming high human pyramids, said maintaining social distance was the need of the hour and celebrating the festival in a simple manner was in the interest of everyone’s health.

His mandal has undertaken the plastic-free Mumbai and clean environment initiative on Wednesday to mark the festival while following the social distancing rules.

We are collecting plastic and recycling it. The fund raised through the activity will be used for the education of the needy, Dhawale said.