Jaitley's remarks come a day after the Supreme Court stepped in to mediate in the unprecedented standoff within the Central Bureau of Investigation. 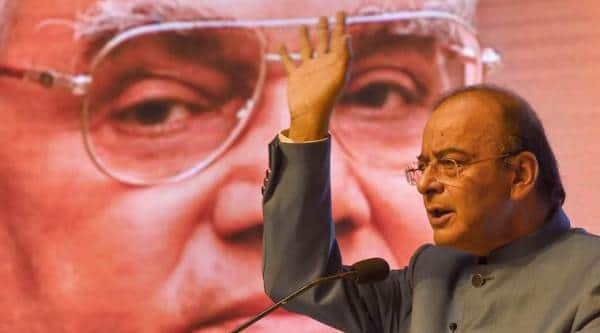 At a time when there is a debate over the role of the government vis-a-vis regulatory institutions, Union Finance Minister Arun Jaitley Saturday underlined the primacy of the elected government and said that “the nation that is India, is higher than any institution or government”.

His remarks come a day after the Supreme Court stepped in to mediate in the unprecedented standoff within the Central Bureau of Investigation, reining in the government’s appointee, and RBI Deputy Governor Viral Acharya warned that undermining the central bank’s autonomy could invite market wrath and ignite economic fires.

He said he was not giving any answer on the “vexed issue”. But, he added, “One answer is clear to me. The country is taller than any institution. And therefore, when we deal with non-accountable institutions, which is a challenge of the day, we will have to keep these challenges in mind. And those who think right will perhaps reflect on this.”

In his almost hour-long lecture, titled ‘Indian Democracy — Maturity and Challenges’, Jaitley also spoke on the recent Supreme Court judgment lifting the ban on entry of women between the ages of 10 and 50 into the Sabarimala shrine, which has led to protests in Kerala, backed by the BJP and RSS.

Pointing out that the Constitution has provisions for various rights such as right to life, right to practise and profess the religion of one’s choice, and the right of minorities to run own institutions, as well as clauses for cow protection in its directive principles, Jaitley said one cannot subsume the other and that everything has to co-exist.

“Rights emanating out of marriage, divorce, adoption, inheritance etc… all should be governed by the constitutional rights of equality and dignity. When it comes to religious rituals and management of religion, unless the practice is obnoxious and hostile to human values, the same can go into the fundamental right to religion and the right to manage your institution.”

Responding to a question after the lecture, the Union minister said that Indian society has been carrying out social reforms and it is easier for societies to work out reforms through own processes rather than through mandates of governments. He cited the banning of child marriage, Sati, and laws against bigamy and polygamy, as well as laws allowing widow remarriage and equality in property for women, as social reforms that had been successfully brought about. “My own view is, there is greater statesmanship by allowing the two sets of fundamental rights to coexist harmoniously,” Jaitley said.

To a question on Kashmir, the senior BJP leader said any government has to get the people of the Valley along to resolve the issue. Every policy and position that the government takes has to be guided by the yardstick that “the people of Kashmir have to be gradually brought to this side”, he said. “In this battle, we need the Kashmiri people on our side. It’s a battle for sovereignty, it’s a battle against separatists and terrorists and the key is also held by the people. And therefore our approach has to be guided by the fact that those people are on our side, and not with the separatists.”

He added that while Central governments try to involve mainstream regional parties in the process, the latter speak one language in Srinagar and another in Delhi. “They must also have the broad shoulders to face the situation… create an alternative set of discourse in the Valley. Unfortunately they duck that responsibility. And therefore this is a battle which India has to win and I have no doubt we will succeed because politics of India has to send a clear message that separatism will never be accepted by India and its mainstream.”

Jaitley also credited Atal Bihari Vajpayee with creating an “alternative voice” in Indian politics at a time when the dominant Congress party had developed dynastic tendencies, “Communists had shrunk to particular regions, Lohia socialists were belligerent but very poor at organisation”.

He advised Opposition leaders to learn from Vajpayee and “respect political rivals”. Citing Vajpayee’s speech after Pandit Jawaharlal Nehru’s death, he said: “Compare it with the current level of political discourse… I hope those who claim the political legacy of Panditji, if they have an aptitude for reading, read (Vajpayee’s speech).”

He also lamented “the degeneration of ideology”, and said an alternative discourse had “redefined many words”. Sanskar had become a ridiculed word, he said, and nationalism had been defined as right-wing, while insurgency using violence as an instrument to overthrow the State was “the new activism”.

Terming Maoism a challenge to democracy, he said Maoists fall into four categories — there were the ideological, weaponised, misled tribals and then the half-Maoists, those in urban areas backing them. “I must correct myself, they are not half-Maoists,” he added. “They are the overground face of Maoists.”