Count of dead at Balakot: Within BJP, some de-escalation

From Defence Minister Nirmala Sitharaman to Law Minister Ravi Shankar Prasad and Home Minister Rajnath Singh, BJP leaders did not give out any figures and appealed to the Congress and other Opposition parties to trust the Armed Forces and stop seeking evidence of the strike. 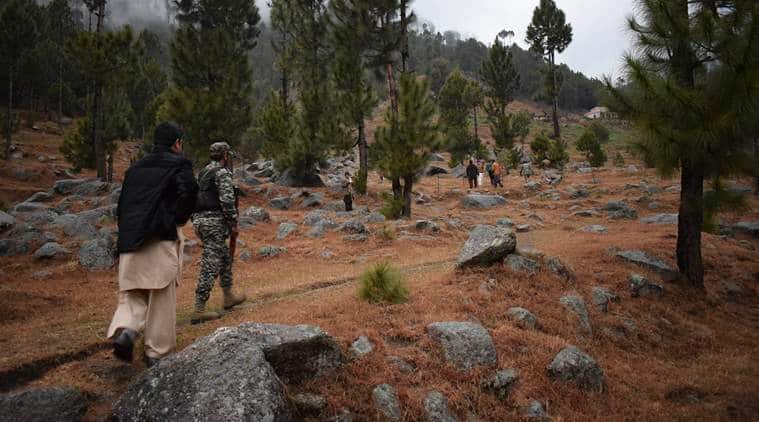 Pakistani reporters and troops visit the site of an Indian airstrike in Jaba, near Balakot, Pakistan, Tuesday, Feb. 26, 2019. (AP/PTI Photo)

Two days after BJP president Amit Shah said “more than 250 terrorists” were killed in the Balakot air strike and amid the Opposition seeking information on the impact of the IAF operation, ruling party leaders Tuesday chose to sidestep questions on casualty figures and underscored instead the importance of the “effective strike”.

From Defence Minister Nirmala Sitharaman to Law Minister Ravi Shankar Prasad and Home Minister Rajnath Singh, BJP leaders did not give out any figures and appealed to the Congress and other Opposition parties to trust the Armed Forces and stop seeking evidence of the strike.

“Look, I am not giving you any number as the death toll on behalf of the government,” said Prasad, who addressed a press conference to counter the Congress’s statements on the Balakot air strike. “How powerful the strike was — you have seen the reports on the number of mobiles that were intercepted, I have already told you four buildings were damaged. The Indian armed forces have crossed PoK and went into Pakistan and returned in 20-25 minutes after massive strikes without even getting a scratch, that itself is a huge success,” he said.

Asked about Shah’s remark Sunday that “more than 250 terrorists were killed”, Prasad said: “The Air Force has said the government would say. What the party president said must have been an estimation. The number could go higher also… We are not speculating on it. The important thing is that it was an effective strike, the damage that should have happened has happened.”

Incidentally, Air Chief Marshal B S Dhanoa on Monday said the Air Force does not count human casualties and it is for the government to provide details on the death toll. On March 2, The Indian Express, quoting top government sources reported that the IAF hit the four buildings it targeted, but limitations of technical intelligence and lack of ground intelligence at this point make any assessment of terrorists killed in the attack “purely speculative”.

In Chennai, Defence Minister Sitharaman did not mention the number of causalities either. She stressed that the February 26 airstrike was “not a military action” as there were no civilian casualties.

According to PTI, she said that Foreign Secretary Vijay Gokhale had not given any casualty figure in his media briefing after the air strike and only issued a statement which is the government’s “position”. Then, Gokhale had said the non-military, pre-emptive strike on the Jaish-e-Mohammad training camp killed a “very large number” of terrorists, trainers and senior commanders.

“The NTRO (National Technical Research Organisation), well-known surveillance system, had said that before IAF pilots dropped bombs, 300 mobile phones were active in that area. You can imagine from that number how many terrorists were killed, we don’t need to say that,” he said, adding that the mobiles phones would not have been used by “plants and trees”.

Party sources said its spokespersons and leaders have been advised not to specify the number of terrorists killed in the Balakot airstrike to the media and in public speeches.

Union Minister V K Singh said that Shah’s remarks on “250 casualties” was an estimate. “Mr Shah is not talking about the exact numbers and it was just an estimate,” Singh said in Ranchi. Asked for details on the casualties, Singh said the exact figures would be known if someone was there. “This is not a game of marbles… This is a serious matter,” he said.

However, Agriculture Minister Radha Mohan Singh said 400 were killed in the airstrikes. “This time they killed 40 people (Pulwama attack) and the Prime Minister said the armed forces were given a free hand. Our armed forces went into Pakistan and killed 400,” he said.

(With Abhishek Angad in Ranchi and Abhishek Saha in Golaghat)