Coronavirus outbreak: The Ministry of External Affairs Tuesday said the Centre has started preparations to evacuate Indians stranded in China’s Wuhan and other parts of China’s Hubei province.

A medical official takes the body temperature of a child at the departure hall of the airport in Changsha, Hunan Province, as the country is hit by an outbreak of a new coronavirus, China. (REUTERS)

Coronavirus outbreak: In the wake of the coronavirus outbreak in China, IndiGo airline stated Wednesday that it has decided to suspend its flights on the Bengaluru-Hong Kong route from February 1 onward and on the Delhi-Chengdu route from February 1 to February 20.  The airline added that it will continue to operate the Kolkata-Guangzhou flight which it is ‘monitoring on a daily basis’.

While India is yet to report a case of the deadly virus, there have been a number of suspected cases across the country. The Ministry of External Affairs Tuesday said the Centre has started preparations to evacuate Indians stranded in China’s Wuhan and other parts of China’s Hubei province. Official sources told The Indian Express that an Air India jumbo jet has been placed on standby in Mumbai as they await the green signal from China for the flight, which will return from Wuhan to Delhi.

The latest cases in India include a Serbian national who returned from China and reached Goa via New Delhi and a medicine student, who was pursuing studies in Wuhan, and his mother who are now quarantined in an isolated ward of a government hospital in Madhya Pradesh’s Ujjain.

Coronavirus spreads to at least 14 countries as death toll in China rises to 132, with over 5,000 confirmed cases. Follow LIVE updates below.

German auto parts maker Webasto said Wednesday it has temporarily shut its headquarters near Munich after four members of its staff were confirmed to have been infected with a new virus earlier this week. The infections are believed to have occurred following contact with a Chinese employee from Wuhan who had traveled to Germany to lead a training session.

The company said most of the 1,000 staff at the site in Stockdorf are working from home for the time being. Webasto has an annual turnover of about 3.4 billion euros from the sale of panoramic car roofs and other auto parts, about half of which goes to China. (AP)

Foreign Ministry spokesperson Raveesh Kumar tweeted Wednesday that the Chinese government has been requested to permit two flights to bring back Indian nationals from Hubei province. 'Chinese Government requested for permission to operate two flights to bring back our nationals from Hubei Province of China. @EOIBeijing in touch with Chinese authorities on the ground to work out necessary logistics. We will share regular updates,' Kumar tweeted.

Chinese Government requested for permission to operate two flights to bring back our nationals from Hubei Province of China. @EOIBeijing in touch with Chinese authorities on the ground to work out necessary logistics. We will share regular updates.

Explained: How to read the AYUSH ministry advisory on coronavirus infection

On Wednesday (January 29), the Ministry of AYUSH issued an “Advisory for Corona virus”, “based on the Indian traditional medicine practices Ayurveda, Homeopathy and Unani”. The advisory listed several “Preventive Management Steps” as per ayurvedic practices, and several “Unani Medicines useful in symptomatic management of Corona Virus infection”. READ MORE

Centre urged to provide kits to conduct tests in Hyderabad

The Telangana government has urged the Centre to provide requisite medical kits for conducting tests for coronavirus in Hyderabad itself in case its severity increases and there is a possibility of it spreading to the state also. The samples are presently being sent to the National Institute of Virology at Pune.

The state government is taking all precautionary measures, state Health Minister E Rajender said on Wednesday. "We urge the Centre, in case the severity (of the virus) increases and if there is a possibility of it spreading in our region also, that we can conduct the tests (for determination of virus) here itself..instead of sending it to Pune if you can provide the concerned kits to us," he told reporters here. (PTI)

No hot meals, blankets, magazines as airlines step up fight on virus

Passengers on some flights to China will have to make do without hot meals, blankets, and newspapers, as airlines step up measures to protect crew and travellers from a new virus that has killed more than 130 in the country.  Seeking to contain the spread of the coronavirus by reducing personal contact, Taiwan's China Airlines said it was encouraging passengers to bring their own drinks bottles and would limit re-usable items by replacing them with disposables. (Reuters)

Indonesian airline Lion Air Group said it will suspend all flights to China from February due to concern over the outbreak of coronavirus in China, the company said on Wednesday.  The airline has suspended six flight routes from several Indonesian cities to China so far and will suspend the rest next month, it said in a statement.

The coronavirus has killed over 130 people in China and nearly 1,500 new cases were reported on Tuesday. (REUTERS)

Air India spokesperson: Air India has advised all its cockpit and cabin crew, who travel to South East Asian cities, to wear N95 masks in the light of #Coronovirus outbreak. pic.twitter.com/brkWDw6xwb

IndiGo airlines said on Wednesday that due to the novel coronavirus outbreak in China, it has decided to suspend its flights on the Bengaluru-Hong Kong route from February 1 onward and on the Delhi-Chengdu route from February 1 to February 20. The low-cost carrier said that for now, it will continue to operate the Kolkata-Guangzhou flight which it is "monitoring on a daily basis".

"Due to China travel restrictions, we have seen a high number of cancellations from China on our Delhi-Chengdu route and vice versa. Therefore, we are suspending our flights between Delhi and Chengdu from February 01, 2020 until February 20, 2020. We are also suspending our Bengaluru- Hong Kong flight effective February 01, 2020," the airline said in a statement.

IndiGo has suspended its flights between Delhi and Chengdu from Feb 1 to Feb 20. It is also suspending our Bengaluru- Hong Kong flight effective Feb 1 due to the Corona Virus situation in China. However, it will continue to operate Kolkata-Guangzhou flight @IndianExpress

Several deadly new viruses in recent years have emerged in China — Severe Acute Respiratory Syndrome (SARS), bird flu, and now the novel coronavirus (nCOV). The reason could lie in the busy food markets dotting cities across the country — where fruits, vegetables, hairy crabs and butchered meat are often sold next to bamboo rats, snakes, turtles, and palm civets. Closely packed stalls in busy marketplaces, the Chinese taste for exotic meats, and the high population density of cities create the conditions for the spread of zoonotic infections, experts say. READ MORE 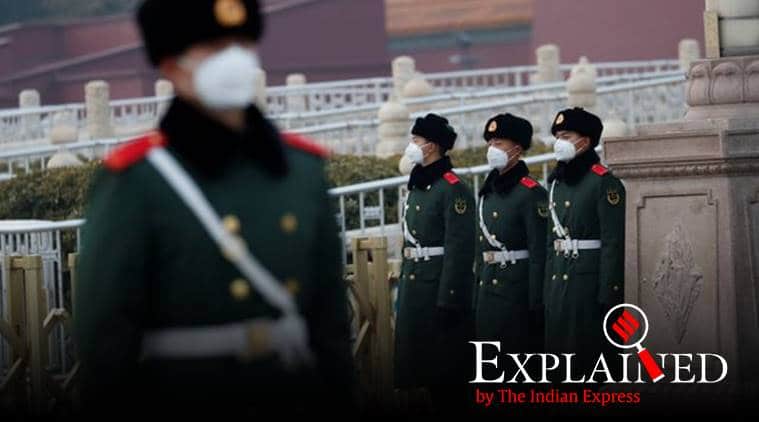 In one of the first known cases of person-to-person transmission outside China, a 33-year-old man apparently contracted the virus on Jan. 21 during a training session with a Chinese colleague, Bavarian officials said. The three other patients were being monitored in isolation at a clinic in Munich.

Russia and China are working to develop a coronavirus vaccine and Beijing has handed over the genome of the virus to Moscow, a Russian diplomatic mission in China said on Wednesday.  The death toll in China from coronavirus rose to 132 on Wednesday with the number of confirmed cases now at nearly 6,000.

'Russian and Chinese experts have begun developing a vaccine,' the Russian consulate in Guangzhou province said in a statement.

Two people in Haryana and another in Punjab with travel history to China have been kept under observation after they showed novel coronavirus-like symptoms, officials said. Haryana Health Minister Anil Vij said that no case of coronavirus has been reported so far in the state. “Of five passengers with travel history to China (in January), two have shown symptoms of the coronavirus infection and they have been kept in isolation wards,” said Vij, adding that their families Vij said advisories have been issued to all district hospitals. The Haryana government is in contact with international airport in Chandigarh and Delhi so that every person coming from China can be properly examined, he said. Read more here

An airplane that a federal official said was evacuating as many as 240 Americans from a Chinese city at the center of a virus outbreak departed Wednesday has landed in the US, news agency AP reported. The US government-chartered the plane to fly out diplomats from the US Consulate in Wuhan, where the latest coronavirus outbreak started, and other US citizens. The plane is making a refueling stop in Alaska before flying on to Southern California, the US Embassy in China has said.

A 49-year-old man from Mumbai became the ninth person in Maharashtra to be kept under observation for possible exposure to novel Coronavirus, a health official said on Wednesday. Maharashtra State Disease Surveillance officer Dr. Pradeep Awte said that six of the nine patients are currently under observation in the state. (PTI)

At the centre of the coronavirus outbreak, the Embassy of India (EOI) in Beijing Wednesday has asked Indians intending to avail the option for evacuation from Hubei province of China to confirm their willingness in writing by 4pm local time (1.30pm IST). In a message sent this morning, EOI officials have said that the Embassy is “working on finalising the date and logistics of the evacuation of Indian nationals” from Hubei province. Roughly 500 Indians are currently in Wuhan and Hubei province amidst an effective lockdown owing to the rapid spread of the novel coronavirus. Read more here

A day after a man showing suspected symptoms of exposure to the coronavirus on returning from China was admitted to the PGIMER, the Mohali district health department was put on high alert Tuesday. Teams of the health department led by civil surgeon Dr. Manjeet Singh inspected 189 passengers who landed at the international airport here from Sharjah on Tuesday. Read more here

A man who was found with symptoms of coronavirus here has been tested negative for the virus infection on Wednesday. “The test report of the patient, who is admitted at SMS hospital in Jaipur, is negative,” a spokesperson of the health department said. The patient is under observation and will be discharged later, he added. The report of the patient's blood samples sent to National Institute of Virology, Pune for testing was received on Wednesday. (PTI)

According to Reuters, British Airways has suspended bookings on its website for direct flights from London to Beijing and Shanghai until March, after warnings over travel to China due to the coronavirus outbreak.

Medical workers in protective gear talk with a woman suspected of being ill with a coronavirus at a community health station in Wuhan in central China's Hubei Province, Monday, Jan. 27, 2020. (Chinatopix via AP)

Hours after the government announced its evacuation move, China’s Ambassador to India Sun Weidong sought to dispel fears with a tweet linking a report from Xinhua, the Chinese state-run news agency. “The WHO does not recommend the evacuation of nationals, and called on the international community to remain calm and not overreact. The WHO is confident in China’s epidemic prevention and control ability,” the tweet said.

In India, officials said of the 20 samples sent to the National Institute of Virology (NIV) in Pune, none have tested positive so far. However, more suspected cases have been reported, including five from Haryana, two from Bhopal and a Serbian tourist in Goa.