Coronavirus May 18 Highlights: Buses to run in Delhi, not more than 20 people allowed

Coronavirus (Covid-19) Tracker Highlights: Delhi Chief Minister Arvind Kejriwal Monday announced that bus service in the capital will resume but only 20 passengers will be allowed at a time. “Screening of passengers will be done before entering. Social distancing will be maintained on each depot,” he said.

“Barbershops, spas and salons to remain closed for now. People will be allowed to step out of their homes between 7 am to 7 pm only. Taxis and cabs will be allowed, but only with 2 passengers at a time,” he announced.

With over 5,000 new infections being reported in the past 24 hours, India registered it’s biggest one-day spike, taking the number of confirmed cases to 96,169. The death toll also saw a jump from 2,872 to 3,029. Currently, India has 36,824 recoveries and 56,316 are active cases. Globally, 4.7 million people have been infected, while over 3.15 lakh casualties have been reported.

India today also entered its fourth lockdown as restrictions were extended till May 31, but with considerable relaxations in non-containment zones While all markets, offices, industries, and businesses will be allowed to open, inter-state and intra-state movement of “passenger vehicles and buses” will be permitted with the consent of the states involved. The restrictions on air travel (domestic and international) and Metro rail services will continue, and schools, colleges, and other educational institutes will remain closed

With the two popular chemical disinfectants being chlorine and Sodium hypochlorite, the advisory warns of the hazards of using both the chemicals thoughtlessly. "Spraying chlorine on a person could cause burns on their skin and eyes and the fumes could lead to nausea and vomitting. Inhalation of Sodium hypochlorite can cause blisters in the throat as well as bronchospasm."

A day after central guidelines for lockdown 4.0 relaxed restrictions on employees coming to office,  the Ministry of Home Affairs Monday released guidelines on measures to be taken to contain the spread of Covid-19 in the workplace.

According to a circular released by the MHA, there are four types of measures to be taken to check the spread of the virus. Read more here

An ambulance driver of health department was beaten by police personnel in Pulwama district of South Kashmir on Sunday night. Officials said that ambulance driver Tariq Ahmad from Shopian was sent to nearby Pulwama to pick up two people who were put under administrative quarantine. The driver alleged that he was stopped at a checkpoint by police personnel in Pulwama and was beaten.

“He had to pick up two people from Pulwama. The driver told us that there was a naka in the area and he was asked to take another route. There was probably an altercation and he said he was beaten by the police present there. He has suffered soft issue injuries,” Chief Medical Officer (CMO) Shopian, Dr. Ramesh Kumar told The Indian Express. He said the matter was taken up with the local authorities and a complaint has been submitted as well.

On Sunday night when the incident happened, Block Medical Officer (BMO) Zainapora and Medical Superintendent Shopian district hospital also reached to the spot. On Monday, ambulance drivers in Shopian staged a protest against the Pulwama police. The driver Tariq Ahmad told The Indian Express that he was sent to Pulwama to pick two quarantined people. “After I picked one, I reached to the circuit road, where policemen were present. They told me to take another route, and road in closed. But after I saw a vehicle coming from the same road, which they told me is closed, I again requested to please allow me to go. They told me to take alternative route. When I objected to it, one policeman came and hit me with stick. I was beaten,” he said. “I contacted seniors and even my brother who is in police department.”

Assam: one person dies of COVID-19 prior to detection; fourth death in the state

On Monday, one person died of COVID-19 in the Gauhati Medical College and Hospital. The person tested positive only after death. “One person had unfortunately died at GMCH prior to detection,” wrote state Health Minister Himanta Biswa Sarma on Twitter. This is Assam's second death prior to detection — earlier this month, a 16-year-old girl tested positive for the virus after she died in Guwahati.

Sarma said that the new death was among the seven new positive cases reported in Guwahati on Monday night. “3 patients are from Sarusajai quarantine centre; & rest 3 related to Aloo Godam case are from Fancy Bazaar containment zone” he wrote on Twitter. Earlier in the day, Assam reported 8 cases from Golaghat, Cachar, Jorhat and Nagaon districts.

The total number of cases reported in Assam stands at 115, with 68 active, and four deaths.

The Manipur home department announced Monday that a total curfew has been declared in Imphal city and all district headquarters. It will be enforced from 6pm to 6am. 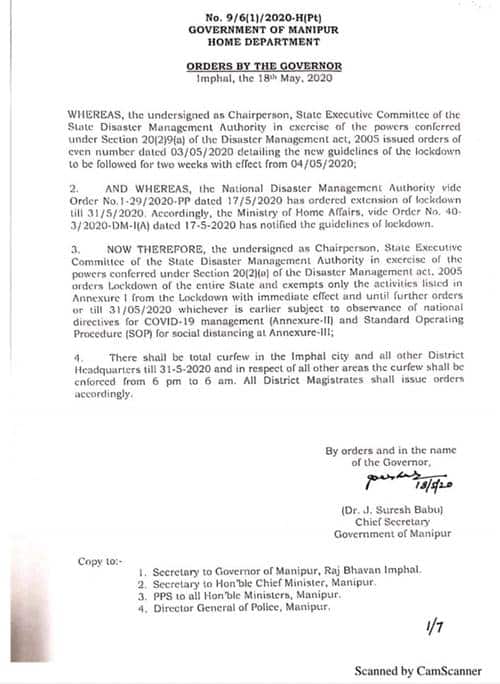 Odisha buses to pick up migrants on the road, drop them at inter-state borders

With an increasing number of migrant workers taking the road across the country to reach their homes in different states, the Odisha government has started a dynamic bus transit system to pick up such migrant workers and drop them to inter-state borders. “Till 18.5.2020, 5.00 PM, Odisha Police arranged 222 trips by bus to transport over 8,000 such migrant labourers of other states using Odisha for transit only. Odisha Police is also running kitchens to feed migrant labour of all types. The biggest such kitchen in Bhadrak is feeding 4,000 people per day,” said a statement issued by the state government.

"As per the latest guidelines issued by various State Government today, driver-partners operating three and four-wheelers on the platform will be available to serve mobility needs on the Ola app, with the highest levels of safety precautions in the states of Karnataka, Telangana, Delhi, Haryana, Chandigarh, Punjab, Tamil Nadu (except Chennai), Andhra Pradesh, Kerala, and Assam," the company said in a statement.

"In all of the 160+ cities where Ola is now operational, enhanced safety protocols are applicable across every single trip. This includes compulsory mask usage for driver-partners and passengers, complete sanitization of cars post-trips, adhering to social distancing norms by limiting to two passengers per ride amongst other key steps through our '10 Steps to a Safer Ride' initiative.’ We urge all users to strictly adhere to local guidelines to undertake only essential trips with all safety precautions,” it said. Night curfew extended in Jammu till May 31

To contain the spread of Covid-19, the UT administration Monday extended night-curfew in Jammu district till May 31. In view of the extension of lockdown, restrictions imposed on the movement of individuals for non-essential activities between 7 pm to 7 am in the district have been extended till May 31, an order issued by Jammu Deputy Commissioner Sushma Chauhan stated.

Union Minister Nitin Gadkari, who was the guest at the Indian Express e-Adda on Monday, said that many industries want to shift base out of China and countries like Japan and US are giving such firms benefits to boost investment. On the govt's Rs 20 lakh crore economic package, Gadkari said it will boost liquidity in the market and attract investment. 'In the next two years, development of roadside industrial clusters, smart cities and logistical parks will be the focus,' he said. What changes for you in the latest phase of lockdown

The Centre on Sunday (May 17) extended the lockdown for two more weeks till May 31, but gave some major relaxations, permitting almost all economic activities and significant public movement. What does the new phase of lockdown mean for the common public, the economy, and the state governments struggling for revenue? Click here for more details.

Jammu and Kashmir recorded 106 fresh Covid cases, of which 94 were from Kashmir and 12 from Jammu: 12. Also, two deaths were reported in Kashmir.

"The package announced will not bring any immediate relief to the distressed farmers. The standing crops have perished due to lockdown causing great losses to the farmers. In turn, they are facing a cash crunch & need immediate support to undertake ensuing Kharif season activities," Sharad Pawar said in his letter to Prime Minister Narendra Modi.

I have raised concerns and shared my views in an open letter to Hon’able Prime Minister Narendra Modi ji over the scope of the 20 trillion package announced by him in the wake of the coronavirus-led damages. @PMOIndia @narendramodi @nsitharaman @ianuragthakur @FinMinIndia pic.twitter.com/PSDRe95naP

Lockdown 4.0 in Delhi: What's open and what’s not

With the Centre extending the nationwide lockdown for two more weeks until May 31 to stop the spread of Covid-19, Delhi Chief Minister Arvind Kejriwal Monday announced a detailed plan for the national capital based on the guidelines of the Ministry of Home Affairs.

Here are some of the dos and don'ts are:

Delhi Chief Minister Arvind Kejriwal Monday announced that bus service in the capital will resume but only 20 passengers will be allowed at a time. “People will be allowed to step out of their homes between 7 am to 7 pm only.”#Lockdown4.0 #ArvindKejriwal #DelhiLockdownRules pic.twitter.com/A8Hnzlm13b

Kerala on Monday reported 29 new coronavirus cases out of which 21 came from abroad and seven from other states. A health worker was infected through primary contact. No recoveries in the last 24 hours. Active cases now stand at 130.

The Kerala government Monday decided to allow public transport in a restricted manner with an increased travel fare to compensate the shortage of passengers. Here are some of the new guidelines.

-Buses and boats can operate within a district with 50 per cent seating capacity.

-Passengers won't be allowed to stand and travel.

-Minimum ticket rates in buses hiked by 50 per cent and 70 paise per km.

-In autos, only one person allowed apart from the driver. If it's a family, 2 people allowed.

"Private offices can open at full strength but they should try that most of the staff work from home. Markets can open but shops will open on odd-even basis. Sports complexes and stadiums can open but without spectators," Delhi CM Arvind Kejriwal announced.

Buses to run in Delhi, not more than 20 people allowed

Delhi Chief Minister Arvind Kejriwal announced that buses will be operational in Delhi, but will carry maximum 20 passengers at a time. All passengers will be screened before entering. Social distancing will be maintained at bus depots.

Barber shops, spas and salons to remain closed in Delhi

"Barber shops, spas and salons to remain closed in Delhi for now," Delhi Chief Minister Arvind Kejriwal announced. "Stepping out of homes between 7 pm to 7 am, except for essential services will be prohibited. Taxis and cabs will be allowed but only 2 passengers at a time in a car," he said. 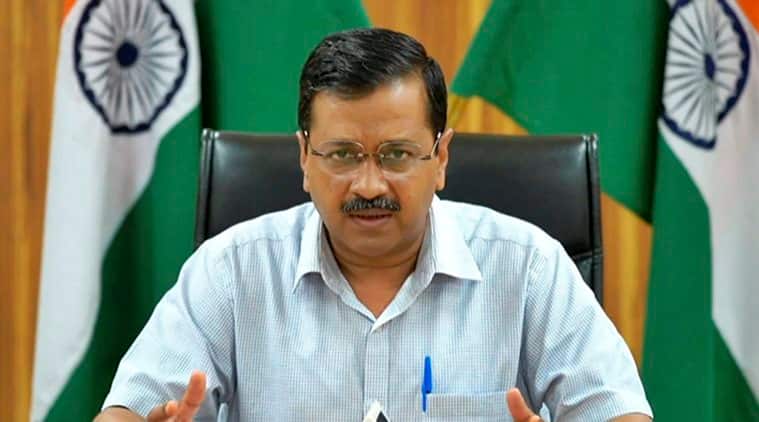 In the new guidelines issued by the Ministry of Home Affairs for lockdown 4.0, states and Union Territories (UTs) have been given powers to delineate the Red, Green and Orange Zones as the coronavirus situation demands. Furthermore, inter-state movement of passenger vehicles, buses have been allowed with mutual consent of states.

Centre climbs down on Aarogya Setu

The May 17 MHA order states: “With a view to ensuring safety in offices and workplaces, employers on best effort basis should ensure that Aarogya Setu is installed by all employees having compatible mobile phones. District authorities may advise individuals to install the Aarogya Setu application on compatible mobile phones and regularly update their health status on the app.”

With the Centre extending the nationwide lockdown for two more weeks until May 31 to stem the spread of Covid-19, the Ministry of Home Affairs (MHA) said new guidelines have permitted considerable relaxations in restrictions and that states will decide various zones, taking into consideration parameters shared by the Health Ministry.