Coronavirus Highlights: India's Covid-19 tally surpassed 1.12 crore on Tuesday with 12,286 new infections. More than half of these, or 6,397 cases, were detected in Maharashtra.

Coronavirus India Highlights: The Centre on Tuesday directed states to utilise full capacity of private hospitals to operate as vaccination sites, as India entered Day 2 of the second phase of the inoculation drive today. All private hospitals that are not empanelled under the Central government schemes are now permitted to operate as vaccination sites.

More than 1.48 crore doses of the COVID-19 vaccine were administered till 1 pm today since the second phase of the inoculation drive kickstarted Monday, the government informed. Out of this, 2,08,791 people are above the age of 60 or are aged between 45-60 with comorbidities. Also, the government has received 50 lakh registrations on CoWIN for COVID-19 vaccination so far.

Addressing a press briefing, Health Secretary Rajesh Bhushan further said that although certain states in the country have seen a surge in the number of active cases, the recovered cases are more than 97 per cent and the active cases are still less than 2 per cent. He added that the COVID-19 pandemic is close to being under control with India’s overall case positivity at 5.11 per cent. “According to the World Health Organisation, if 140 tests per million are being conducted per day and the case positivity rate is at 5 per cent or below, it means the COVID-19 pandemic is under control. We are very close to that mark at 5.11 per cent overall case positivity”.

Meanwhile, India’s Covid-19 tally surpassed 1.12 crore on Tuesday with 12,286 new infections. More than half of these, or 6,397 cases, were detected in Maharashtra. Kerala reported 1,938 cases. At least 97 deaths were reported on Monday, taking the toll in the country to over 1.57 lakh. Apart from Maharashtra and Kerala, the other states reporting an uptick in daily cases are Punjab, Gujarat, Chhattisgarh, West Bengal, Jammu & Kashmir and Madhya Pradesh.

The Central government on Tuesday said that it has asked for a report from the Karnataka government in connection with state Agriculture Minister B C Patil taking the COVID-19 vaccine at his residence instead of going to a designated hospital.

Cambodia on Tuesday received its first batch of 324,000 coronavirus vaccine doses from India that are part of the World Health Organization's COVAX initiative, as the country expands its immunisation programme with the goal of inoculating a majority of its population this year.

Health Minister Mam Bunheng was at the airport to receive the shipment of the Oxford-AstraZeneca Covishield vaccine. Prime Minister Hun Sen will be given the first dose on Thursday.

Cambodia, which has yet to report any virus deaths, received its first shipment of 600,000 doses of a Chinese-produced vaccine on February 7, part of 1 million doses Beijing is donating. (AP)

Kerala recorded 2,938 new Covid-19 cases and 16 deaths on Tuesday. With 3,512 patients recovering from the infection in the last 24 hours, the active caseload came down to 47,277. The number of people who have succumbed to the infection in the state now stands at 4,226.

For the second consecutive day, the test positivity rate stood below 5%, with 68,094 samples tested in the last 24 hours. Read More

In a push to further increase the vaccination coverage among the general population, the Centre has directed the states to utilise 100 per cent capacity of private hospitals functioning as Covid-19 vaccination centres.

In the first two days of the second phase of innoculation drive that began on Monday – where all citizens above the age of 60 years and those above 45 years with associated comorbidities are eligible for vaccination – only private hospitals empanelled under Ayushman Bharat, Central Government Health Scheme (CGHS), and State Health Insurance were designated as vaccination centres. Read More

No COVID death in Delhi

Delhi witnessed no coronavirus death in a day, the Health Department said on Tuesday, the fifth time within a month that there was not a single daily fatality from the pathogen in the city.

The infection tally rose to 6,39,681 with new 217 cases the previous day and 78 more people recuperated from the virus, taking the number of recoveries to 6.27 lakh, the department said.

The cumulative positivity rate and fatality rate stands at 5.12 per cent and 1.71 per cent respectively. (PTI)

“All the students are in the age group of 16-18 years and were in the school hostel. They had returned from their homes after the school reopened. The school’s hostel has been declared a containment zone. Adequate Covid-19 protocols are being followed,” Karnal’s chief medical officer Dr. Yogesh Sharma told The Indian Express. Read More

BJP leader Devendra Fadnavis on Tuesday alleged corruption in the measures taken by the Shiv Sena-led Maharashtra government in handling the COVID-19 situation in the state. Speaking in the Legislative Assembly, the Leader of the Opposition also referred to a Central survey and said the number of COVID-19 deaths in Maharashtra could have been lesser by 30,900 and the cases by 9.55 lakh had the state government handled the situation properly. Read More

COVID-19 vaccine acceptance among pregnant women and mothers is the highest in India, the Philippines and some Latin American countries, according to a survey of 16 countries that asked questions premised on a safe and free preventive with 90 per cent efficacy.

The survey to assess the response of pregnant women and mothers of children younger than 18 years and their willingness to vaccinate themselves and their children was conducted by a led by team from the Harvard T.H. Chan School of Public Health.

The online survey was conduced between late October and mid-November 2020. Almost 18,000 women in 16 countries responded to questions about the hypothetical safe and free COVID-19 vaccine with 90 per cent efficacy, the Harvard  researchers said. (PTI)

In the wake of the rising number of Covid-19 cases in Pune, the Pimpri-Chinchwad Municipal Corporation (PCMC) on Tuesday turned down speculations that it would be soon falling short of beds to admit coronavirus patients. The PCMC also said that it was not planning to activate 23 Covid Care Centres (CCC) due to adequate availability of beds.

Union Defence Minister Rajnath Singh was administered the first dose of COVID-19 vaccine at RR Hospital in New Delhi. Informing about the same in a tweet, he said the vaccine is 'completely safe and hassle free.'

The minister also appreciated the efforts of India’s scientists and doctors who developed the vaccine in a short span of time.

I salute the efforts of India’s scientists and doctors who developed the Vaccine in a short span of time.

I also thank the Doctors and paramedic staff at the RR Hospital for the vaccination.

I urge everyone who is eligible to take the vaccine and make India COVID free.

India's total COVID-19 active cases stand at 1.68 lakh with five states accounting for 84.16 per cent of the active infections, while six states and UTs have a weekly positivity rate higher than the national average of 2 per cent, the Union Health Ministry said on Tuesday.

Maharashtra and Kerala alone account for 67.84 per cent of total active cases, it said.

Makkal Needhi Maiam (MNM) founder Kamal Haasan was on Tuesday administered with the COVID-19 vaccine at a city hospital. The actor-politician was inoculated a day after the nationwide vaccination of 60 plus age group and those aged between 45-59 with co-morbidities was launched, with Prime Minister Narendra Modi receiving the first shot on Monday.

'I took the coronavirus vaccine at Sri Ramachandra Hospital. Those who care not only for themselves but also for others should get vaccinated,' Haasan said in a tweet that was accompanied with a picture of him getting vaccinated.

'Immunisation of the body immediately (and) vaccination against corruption next month. Get ready,' he said in an apparent reference to the April 6 Assembly elections. (PTI)

India has shown the capacity to be a global-scale manufacturer and also an innovator when it comes to coronavirus vaccines, World Health Organization's Chief Scientist Soumya Swaminathan said Monday.

Speaking at the Global Bio-India 2021, she opined that the fight against the coronavirus pandemic is at a very critical junction now as cases have suddenly gone up, particularly in Europe and America. There are many uncertainties now, especially on the different variants of the virus, she noted.

As many as 30 vaccines are at different stages of development in India. Covaxin, developed indigenously by Biotech, and Covishield, developed by Oxford-AstraZeneca and being manufactured at Serum Institute of India, are already in use in the country. (PTI)

Maharashtra, Kerala, Punjab, Tamil Nadu and Gujarat are reporting an uptick in Covid-19 cases. The Centre has advised these states to maintain a continued rigorous vigil to contain the spread of the disease.

Union Health Minister Dr Harsh Vardhan received the first dose of the coronavirus vaccine today. He was administered the shot at Delhi Heart & Lung Institute in New Delhi. Vardhan was innoculated along with his wife. Here are some PTI photos: 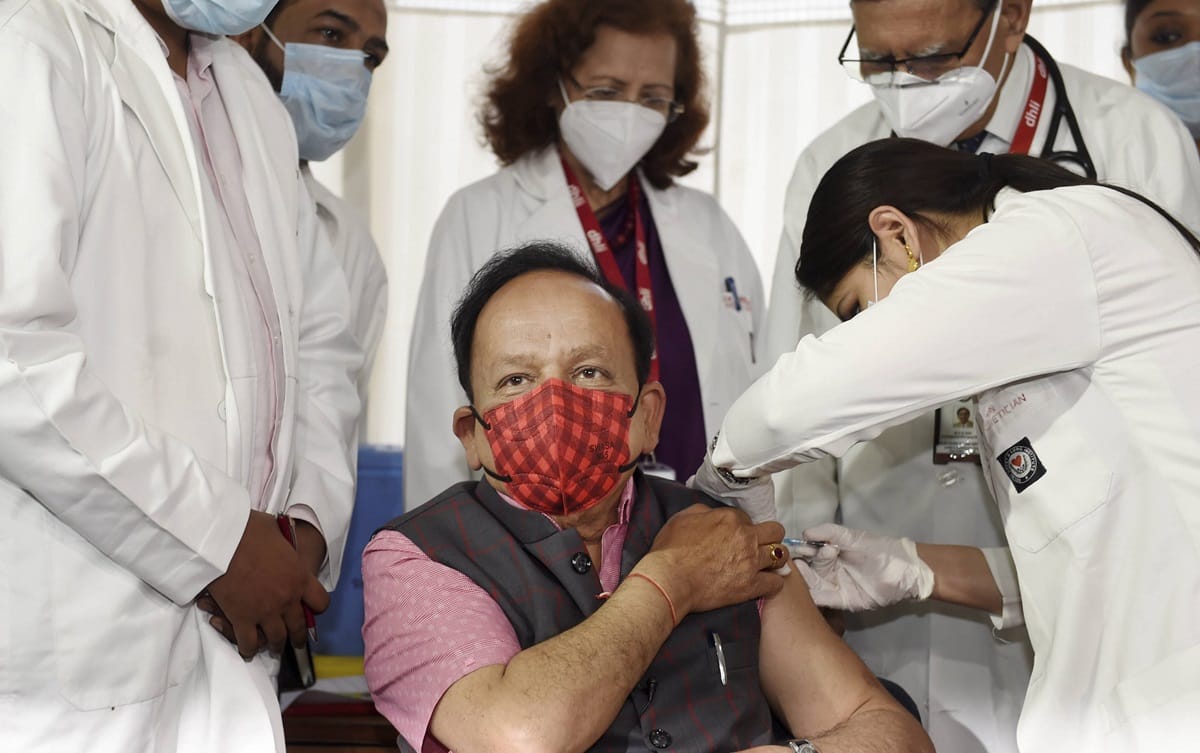 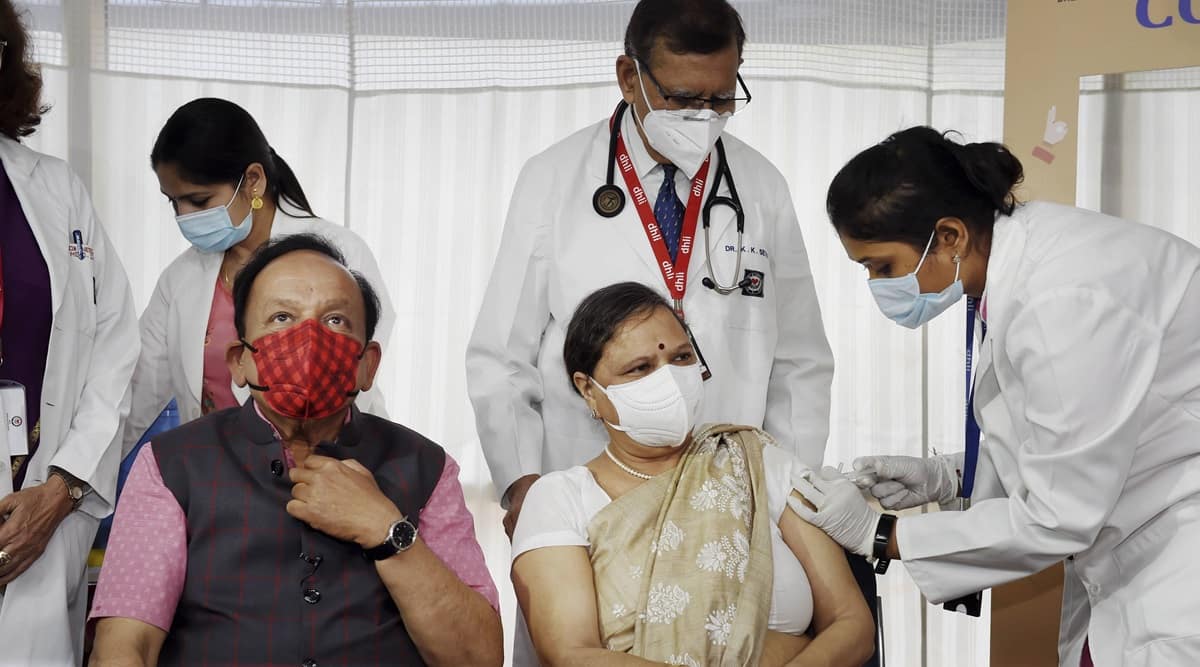 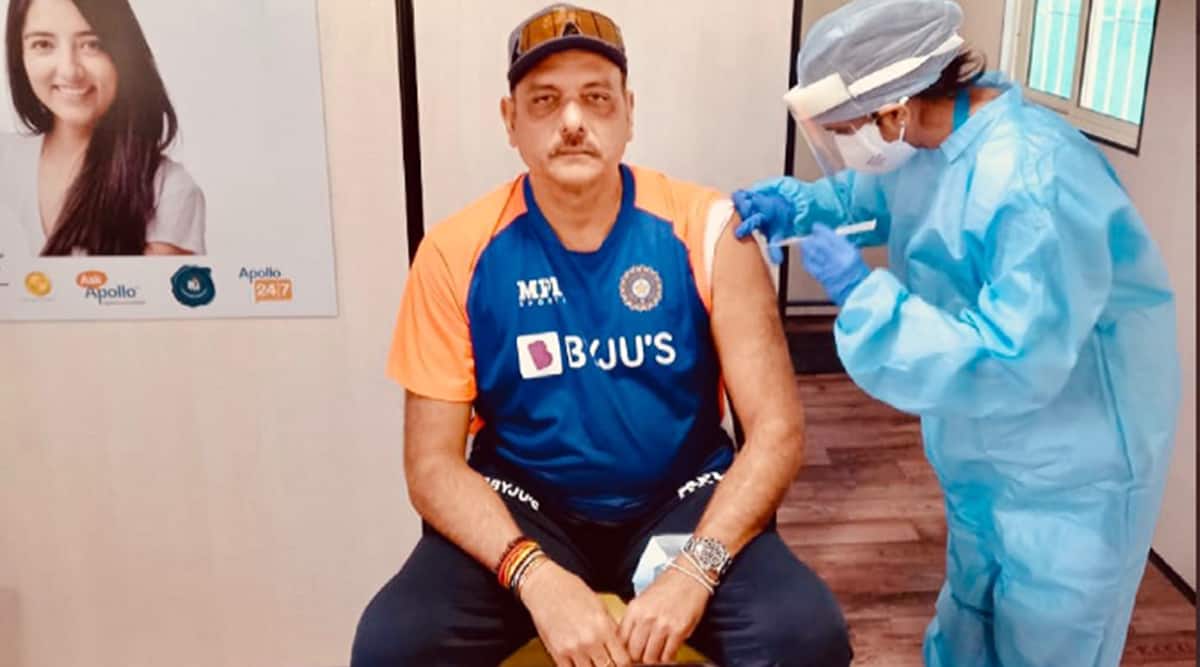 BJP Lok Sabha MP from Khandwa, Nand Kumar Singh Chauhan passed away during treatment in Medanta Hospital in New Delhi. He had tested positive for Covid-19 and was undergoing treatment in the city. Chauhan was the former president of MP BJP unit.

🦠 So far, more than 1.12 crore people have been found infected

India has donated Covid-19 vaccines to Saint Lucia and St Kitts and Nevis, two countries in the Caribbean. Allen M. Chastanet, Prime Minister of St Lucia, tweeted last night: "Thank you to Prime Minister @narendramodi and our friends from India for donating 25,000 doses of the AstraZeneca COVID-19 Vaccine to Saint Lucia."

PM Timothy Harris of St Kitts and Nevis said, "I would like to thank the Prime Minister of India, @PMOIndia for the compassion he is showing other nations during this time. His generous heart and enduring sense of caring and solidarity are important values which we both share. Our nation is grateful for the vaccines provided."

Thank you to Prime Minister @narendramodi and our friends from India for donating 25,000 doses of the AstraZeneca COVID-19 Vaccine to Saint Lucia🇱🇨🇮🇳 pic.twitter.com/afWoQVZMtd

I would like to thank the Prime Minister of India, @PMOIndia for the compassion he is showing other nations during this time. His generous heart & enduring sense of caring & solidarity are important values which we both share. Our nation is grateful for the #vaccines provided. pic.twitter.com/57ljt7a2dX

Maharashtra vaccinated 5,867 senior citizens and 1,253 comorbid population on Monday as the next phase of immunisation kicked off, data pooled from several districts and state health department show. Even as a large number of senior citizens and people with various co-morbidities thronged vaccination centres in several cities, Maharashtra’s overall vaccination numbers fell by half on Monday, achieving 48 per cent of targeted vaccinations.

As many as 15,521 beneficiaries — including people above 60 years and those aged 45 and above with co-morbidities — received the Covid-19 vaccine in the capital under the second phase on Monday. This includes 5,176 people above 60 years, 1,009 between 45 years and 59 years, as well as 4,296 frontline workers and 1,954 healthcare workers who got their first dose.

The immunisation programme was carried at 192 sites where 308 centres have been set up by the Delhi government.

A total of 17,079 people were vaccinated on Monday with no case of adverse event following immunisation (AEFI) reported, said a health official adding that the new CoWIN-2 portal was plagued by glitches.

“The third phase of the Covid vaccination using the new portal version CoWIN-2 started today throughout the state. Besides health and frontline workers, and election officials, elderly people and those above 45 people with co-morbidities were vaccinated today. The portal issues were there, and the vaccination programme suffered because of that. So far, 17,079 were reported to be vaccinated, and there is no information of any AEFI case,” said the official.

The first day saw over 61,000 getting inoculated in Gujarat, with Surendranagar outperforming the state average.

Sabarkantha vaccinated 4,000 beneficiaries followed by Dahod (3,800 plus) and Vadodara district (3,200 plus) indicating rural districts fared better. Tribal districts of Narmada and Dang fared the worst with fewer than 100 beneficiaries of third phase receiving the first shot. In Ahmedabad city, the drive was marked with “technical glitches” and a “low turnout against the target, where 997 people got their first shot.