Coronavirus May 11 Highlights: Highest number of Covid-19 recoveries recorded in a day

Coronavirus (Covid-19) Tracker India Highlights: Earlier in the day, Prime Minister Narendra Modi on Monday held a fresh round of meeting with chief ministers — his fifth meeting on the Covid-19 pandemic — to discuss the post-lockdown strategy and ways to ramp up economic activity.

The total number of confirmed cases in the country are now at 67,152.

Coronavirus in India Highlights: India on Monday reported it’s biggest single-day spike of 4,213 infections, taking the total number of confirmed cases in the country to 67,152. Of these, as many as 20,917 patients have been cured till now, taking the recovery rate to 31.15 per cent. The death toll stands at 2,206.

Earlier in the day, Prime Minister Narendra Modi on Monday held a fresh round of meeting with chief ministers — his fifth meeting on the Covid-19 pandemic — to discuss the post-lockdown strategy and ways to ramp up economic activity. Prime Minister Narendra Modi said the road ahead should be focused on reducing the spread of Covid-19 and ensuring that all precautions were taken by people, including social distancing norms, by observing ‘do gaaj doori’.

Nagpur is ready with what may be the biggest ‘Covid care centre’ in the country with a capacity to house 5,000 persons.

Set up on the premises of the sprawling Radhaswami Satsang Beas, a spiritual organisation with centres across the country, the initiative by Nagpur Municipal Corporation’s (NMC) Commissioner Tukaram Mundhe is aimed at being prepared to face the possible ‘corona peak’, as predicted by experts, after May 15. Read More

Gujarat HC observation: ‘Situation seems to be out of control… migrant workers are suffering’

The Gujarat High Court on Monday took note of news reports highlighting the difficulties faced by migrant workers and as well as “underprivileged and weaker sections of the society that were afraid of dying of starvation and not COVID-19”.

In an ongoing hearing of a suo motu public interest litigation concerning the state’s measures to address several aspects of the pandemic, the court observed that the ”situation seems to be going out of control”. It said though the state government may be doing its best, “yet we find that something is wrong somewhere. It appears that there is no proper coordination among various departments of the state government”. Read More

In the third phase of the lockdown, more than one lakh domestic workers in Pune district now fear a permanent loss of their livelihood. Many housing societies have refused them entry point blank, with employers also deducting salaries. Pointing out the need of written directives from authorities, these women are demanding that the labour commissioner’s office step in to help them. Read More

As the number of coronavirus cases in Maharashtra crossed 22,000 on Monday morning, another worrying number came to the fore as positive cases in the state police force crossed the 1,000 — signifying how police personnel are at high risk.

As on Monday morning, 106 officers and 901 constables from the state police tested positive, taking the number to 1,007. As on the morning of May 9, this figure stood at 714, but 293 cases were added to the tally in two days. Of the 1,007, 15 officers and 98 constables have already recovered. The number of active cases as on Monday morning was 887. Seven cops have died of the infection to date. Read More

Remaining Nanded pilgrims to be sent back after testing for Covid-19: Authorities

Nanded district authorities have decided to test over 200 pilgrims, who are still stranded in the city and living on the premises of the Shri Hazur Sahib Gurudwara, for coronavirus. Speaking to the media on Monday, District Collector Vipin Itankar said the pilgrims were from Uttar Pradesh, Delhi and Harayana, and they will undergo Covid-19 tests before they are allowed to leave Nanded.

“More than 100 have been tested, of whom only seven have tested positive. The testing of the others will be completed soon,” he said. If all remaining pilgrims test negative, the district administration will start talking with the respective state governments about plans to send them back home, said Itankar. Read more here

Two more jawans of the Border Security Force (BSF) in Tripura's Dhalai district were tested positive on Monday. The district was declared a 'red zone' earlier this month. With this, the total tally of Covid-19 cases in the state has reached 154.

CRPF man kills self on suspicion he had Covid-19
Suspecting that he may have have contracted the coronavirus, a sub-inspector of the Central Reserve Police Force committed suicide in Mutton at Anantnag, officers  said. SI Fatah Singh (55), from Jaisalmer in Rajasthan, shot himself with his weapon in his barracks on Monday evening. In a suicide note found in his accommodation, he asked that no one touch his body since “I am afraid, I have corona.”
A senior official familiar with the case said that since he was of advanced age, he was not being sent on duty and was stationed within the camp itself.
CRPF PRO Gul Junaid Khan confirmed the incident to The Indian Express.
Karnataka: Govt says 58.10 lakh Aarogya Setu downloads so far

Apprising Prime Minister Narendra Modi of the COVID-19 situation in Karnataka Chief Minister B S Yediyurappa Monday said there have been 58,10,813 downloads of the Aarogya Setu app in the state so far.

“The Aarogya Setu has been integrated with ApthaMitra for telephonic monitoring and the treatment of suspect cases. It is vital to educate the population with the right positive messaging,” Yediyurappa added.

Further presenting the state’s progress of dealing with the pandemic, Yediyurappa said the ‘4 T’ approach of the government — Tracing, Tracking, Testing and Treating — has largely contributed towards keeping the numbers of coronavirus positive cases comparatively low. Read more here

Globally, there are over 4 million coronavirus cases, with deaths exceeding 2,83,586. According to Johns Hopkins data, the United States continues to be the worst-affected country with 79,607 fatalities, followed by United Kingdom (32,140) and Italy (30,560).

Here are the top developments:

-‘Absolute chaotic disaster’: Obama lashes out at Trump over COVID-19

-France emerges cautiously out of lockdown

While maintaining that there should be restrictions on inter-state travel, Kerala CM Pinarayi Vijayan said each state should be allowed to make changes in the lockdown guidelines according to the conditions prevailing in their respective areas.

“Relaxations should be gradual. Domestic flight services could be resumed with special guidelines, except the containment zones. Medical tests could be conducted at the airports and those with symptoms should not be allowed to travel,” Vijayan said. He also reiterated the demand for raising borrowing limit, and to make more funds available at lower interest rates.

Gujarat's Narmada district is back on the Covid-19 list after a gap of 17 days. A 37-year-old community health worker, who was appointed to screen incoming persons to the district at a checkpoint has been reported Covid-19 positive on Monday. However, the case has left administration perplexed, as none of the person screened at the checkpoint has tested positive.

A new study has found an association between low average levels of vitamin D and high numbers of Covid-19 cases and mortality rates across 20 European countries. Vitamin D is known to modulate the response of white blood cells, preventing them from releasing too many inflammatory cytokines (part of the body’s immune response to fight infections). And the SARS-CoV2 virus is known to cause an excess of pro-inflammatory cytokines, called a cytokine storm. Click here to read our explainer.

In a video conference with Prime Minister Narendra Modi, Kerala Chief Minister Pinarayi Vijayan Monday said that each state should be allowed to make changes in lockdown guidelines as per conditions prevailing in their respective areas.

Each states should be allowed to make changes in the lockdown guidelines according to the conditions prevailing in their respective areas, Kerala CM said in VC with PM @IndianExpress

Bookings for 15 special trains began Monday evening on The Indian Railway Catering and Tourism Corporation (IRCTC) website following a two hours delay. However, despite the delay, all AC-1 and AC-3 tickets for the Howrah-New Delhi train were sold within the first 10 minutes. More information here. 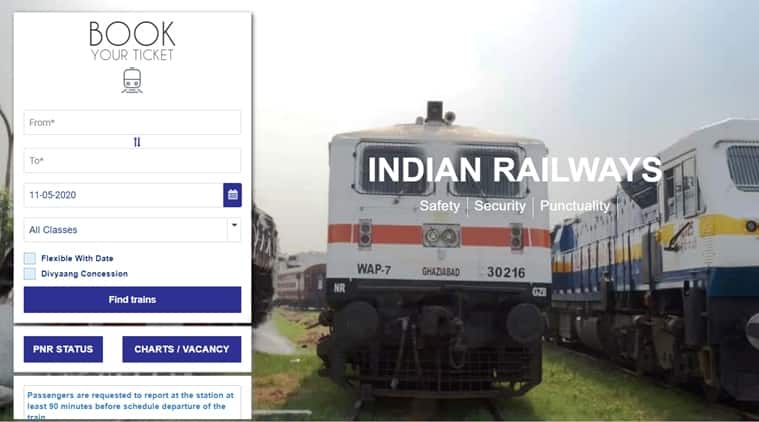 The Centre has asked states to ensure migrant labourers do not walk on the road or railway tracks to reach home. It has asked them to counsel such labourers and put them in shelters. The development comes in the backdrop of 16 migrant labourers being crushed to death by a train near Aurangabad last week, and many also meeting fatal accidents routinely on roads while attempting to walk back to their homes amid the coronavirus lockdown,

In another order, the Centre has asked states not to restrict the movement of doctors and healthcare workers as it could jeopardise Covid-19 fighting efforts. This follows after many cities such as Noida, Ghaziabad, Gurgaon and Faridabad did not allow doctors to commute to Delhi recently. Read more here

'Not the time for politics': Mamata Banerjee lashes out at Centre

During the video conference held by PM Narendra Modi with states CMs, Tamil Nadu CM Palaniswami urged him to not allow train, air services till May 31.

Tamil Nadu CM Edappadi K Palaniswami requests PM Narendra Modi not to permit the operation of regular air and train services till May 31 in the state. @IndianExpress pic.twitter.com/7sR7jWydBs

Prime Minister Narendra Modi on Monday held a fresh round of meeting with chief ministers — his fifth meeting on the Covid-19 pandemic — to discuss the post-lockdown strategy and ways to ramp up economic activity. The general sentiment in the government appears to be against rolling back the relaxations towards a gradual un-lockdown. The third phase of the lockdown will end on May 17. More info here.

The Indian Railway Catering and Tourism Corporation (IRCTC) website — the online ticket booking portal of Railways — went unresponsive as booking for 15 special trains began Monday afternoon. The bookings were supposed to start at 4 pm on IRCTC's website irctc.co.in. It will now start at 6 pm. Migrants setting off on their journey home in a 'Shramik Special' train. (Express Photo)

However, 180 Keralites at Doha airport faced disappointment as the Air India Express repatriation flight got cancelled. The flight, which was had left from the Karipu Airport in Kozhikode to airlift the passengers from Doha and bring them to Thiruvananthapuram, did not get landing permission from the Interior Ministry of Qatar, following which it had to be cancelled, Thiruvananthapuram District Collector Gopalakrishnan said.